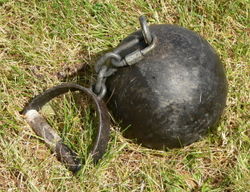 In the Highland Games, the weight throw consists of two separate events, the light weight and the heavy weight. In both cases, the implement consists of a steel or lead weight (usually spherical or cylindrical) attached by a short chain to a metal handle. The handle may be a d-ring, a triangle or a ring. The size of the weight depends on the class of the competition.

The weight is thrown one-handed from a rectangular (4.5 feet by 9 feet) area behind a toe board or trig. The athlete must stay behind the trig at all times during the throw. The techniques vary, but usually involve a turning or spinning motion to increase momentum before the release. Each athlete gets three attempts, with places determined by the best throw.