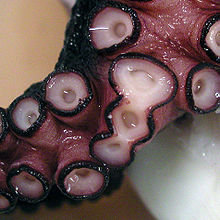 A deformity, dysmorphism, or dysmorphic feature is a major difference in the shape of body part or organ compared to the average shape of that part.
Deformity may arise from numerous causes:

Deformity can occur in non-humans, as well. Frogs can be mutated due to Ribeiroia
Ribeiroia
Ribeiroia is a group of trematode parasites that sequentially infect freshwater snails in the family Planorbidae as first intermediate hosts, fish and larval amphibians as second intermediate hosts, and birds and mammals as definitive hosts...
(Trematoda
Trematoda
Trematoda is a class within the phylum Platyhelminthes that contains two groups of parasitic flatworms, commonly referred to as "flukes".-Taxonomy and biodiversity:...
) infection.
In many cases in which a major deformity is present at birth, it is the result of an underlying condition severe enough that the baby does not survive very long. The mortality of severely deformed births may be due to a range of complications including missing or non-functioning vital organs, structural defects that prevent breathing or eating, and high susceptibility to injuries or infections that lead to death.

Mythological creatures may have been created due to a deformative syndrome also, for instance, descriptions of mermaid
Mermaid
A mermaid is a mythological aquatic creature with a female human head, arms, and torso and the tail of a fish. A male version of a mermaid is known as a "merman" and in general both males and females are known as "merfolk"...
s may be related to the symptoms of sirenomelia
Sirenomelia
Sirenomelia, alternatively known as Mermaid Syndrome, is a very rare congenital deformity in which the legs are fused together, giving them the appearance of a mermaid's tail....
. The Irish Mythology
Irish mythology
The mythology of pre-Christian Ireland did not entirely survive the conversion to Christianity, but much of it was preserved, shorn of its religious meanings, in medieval Irish literature, which represents the most extensive and best preserved of all the branch and the Historical Cycle. There are...
includes the Fomorians
Fomorians
In Irish mythology, the Fomoire are a semi-divine race said to have inhabited Ireland in ancient times. They may have once been believed to be the beings who preceded the gods, similar to the Greek Titans. It has been suggested that they represent the gods of chaos and wild nature, as opposed to...
, who are almost without exception described as being deformed, possessing only one of what most have two of (eye
Human eye
The human eye is an organ which reacts to light for several purposes. As a conscious sense organ, the eye allows vision. Rod and cone cells in the retina allow conscious light perception and vision including color differentiation and the perception of depth...
s, arm
Arm
In human anatomy, the arm is the part of the upper limb between the shoulder and the elbow joints. In other animals, the term arm can also be used for analogous structures, such as one of the paired forelimbs of a four-legged animal or the arms of cephalopods...
s, leg
Human leg
The human leg is the entire lower extremity or limb of the human body, including the foot, thigh and even the hip or gluteal region; however, the precise definition in human anatomy refers only to the section of the lower limb extending from the knee to the ankle.Legs are used for standing,...
s, etc.) or having larger than normal limbs.
The source of this article is wikipedia, the free encyclopedia.  The text of this article is licensed under the GFDL.