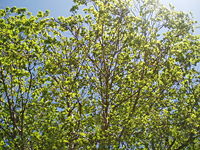 A branch (ˈbrɑːntʃ or ˈbræntʃ, ˈbræntʃ) or tree branch (sometimes referred to in botany
Botany
Botany, plant science, or plant biology is a branch of biology that involves the scientific study of plant life. Traditionally, botany also included the study of fungi, algae and viruses...
as a ramus) is a woody structural member connected to but not part of the central trunk
Trunk (botany)
In botany, trunk refers to the main wooden axis of a tree that supports the branches and is supported by and directly attached to the roots. The trunk is covered by the bark, which is an important diagnostic feature in tree identification, and which often differs markedly from the bottom of the...
of a tree
Tree
A tree is a perennial woody plant. It is most often defined as a woody plant that has many secondary branches supported clear of the ground on a single main stem or trunk with clear apical dominance. A minimum height specification at maturity is cited by some authors, varying from 3 m to...
(or sometimes a shrub
Shrub
A shrub or bush is distinguished from a tree by its multiple stems and shorter height, usually under 5–6 m tall. A large number of plants may become either shrubs or trees, depending on the growing conditions they experience...
). Large branches are known as boughs and small branches are known as twigs.

While branches can be nearly horizontal
Horizontal plane
In geometry, physics, astronomy, geography, and related sciences, a plane is said to be horizontal at a given point if it is perpendicular to the gradient of the gravity field at that point— in other words, if apparent gravity makes a plumb bob hang perpendicular to the plane at that point.In...
, vertical
Vertical direction
In astronomy, geography, geometry and related sciences and contexts, a direction passing by a given point is said to be vertical if it is locally aligned with the gradient of the gravity field, i.e., with the direction of the gravitational force at that point...
, or diagonal
Diagonal
A diagonal is a line joining two nonconsecutive vertices of a polygon or polyhedron. Informally, any sloping line is called diagonal. The word "diagonal" derives from the Greek διαγώνιος , from dia- and gonia ; it was used by both Strabo and Euclid to refer to a line connecting two vertices of a...
, the majority of trees have upwardly diagonal branches.

The term "twig
Twig
A twig is a small thin terminal branch of a woody plant. Twigs are critically important in identification of trees, shrubs and vines, especially in wintertime. The buds on the twig are an important diagnostic characteristic, as are the abscission scars where the leaves have fallen away...
" often refers to a terminus, while "bough" refers only to branches coming directly from the trunk.

Because of the enormous quantity of branches in the world, there are a variety of names in English
English language
English is a West Germanic language that arose in the Anglo-Saxon kingdoms of England and spread into what was to become south-east Scotland under the influence of the Anglian medieval kingdom of Northumbria...
alone for them. In general however, unspecific words for a branch (such as rise and rame) have been replaced
Archaism
In language, an archaism is the use of a form of speech or writing that is no longer current. This can either be done deliberately or as part of a specific jargon or formula...
by the word branch itself.

A bough can also be called a limb or arm, and though these are arguably metaphor
Metaphor
A metaphor is a literary figure of speech that uses an image, story or tangible thing to represent a less tangible thing or some intangible quality or idea; e.g., "Her eyes were glistening jewels." Metaphor may also be used for any rhetorical figures of speech that achieve their effects via...
s, both are widely accepted synonym
Synonym
Synonyms are different words with almost identical or similar meanings. Words that are synonyms are said to be synonymous, and the state of being a synonym is called synonymy. The word comes from Ancient Greek syn and onoma . The words car and automobile are synonyms...
s for bough.

A twig
Twig
A twig is a small thin terminal branch of a woody plant. Twigs are critically important in identification of trees, shrubs and vines, especially in wintertime. The buds on the twig are an important diagnostic characteristic, as are the abscission scars where the leaves have fallen away...
is frequently referred to as a sprig as well, especially when it has been plucked. Other words for twig include branchlet, spray, and surcle, as well as the technical terms surculus and ramulus.

Branches found under larger branches can be called underbranches.

Some branches from specific trees have their own names, such as osiers and withes or withies
Withy
Withy or withe is a strong flexible willow stem that is typically used in thatching and for gardening. An advantage of using this type of material is said to be a greater resistance to woodworm....
, which come from willow
Willow
Willows, sallows, and osiers form the genus Salix, around 400 species of deciduous trees and shrubs, found primarily on moist soils in cold and temperate regions of the Northern Hemisphere...
s. Often trees have certain words which, in English, are naturally collocated
Collocation
In corpus linguistics, collocation defines a sequence of words or terms that co-occur more often than would be expected by chance. In phraseology, collocation is a sub-type of phraseme. An example of a phraseological collocation is the expression strong tea...
, such as holly
Holly
Ilex) is a genus of 400 to 600 species of flowering plants in the family Aquifoliaceae, and the only living genus in that family. The species are evergreen and deciduous trees, shrubs, and climbers from tropics to temperate zones world wide....
and mistletoe
Mistletoe
Mistletoe is the common name for obligate hemi-parasitic plants in several families in the order Santalales. The plants in question grow attached to and within the branches of a tree or shrub.-Mistletoe in the genus Viscum:...
, which usually employ the phrase "sprig of" (as in, a "sprig of mistletoe"). Similarly, the branch of a cherry tree
Cherry
The cherry is the fruit of many plants of the genus Prunus, and is a fleshy stone fruit. The cherry fruits of commerce are usually obtained from a limited number of species, including especially cultivars of the wild cherry, Prunus avium....
is generally referred to as a "cherry branch", while other such formations (i.e., "acacia
Acacia
Acacia is a genus of shrubs and trees belonging to the subfamily Mimosoideae of the family Fabaceae, first described in Africa by the Swedish botanist Carl Linnaeus in 1773. Many non-Australian species tend to be thorny, whereas the majority of Australian acacias are not...
branch" or "orange
Orange (fruit)
An orange—specifically, the sweet orange—is the citrus Citrus × sinensis and its fruit. It is the most commonly grown tree fruit in the world....
branch") carry no such alliance. A good example of this versatility is oak
Oak
An oak is a tree or shrub in the genus Quercus , of which about 600 species exist. "Oak" may also appear in the names of species in related genera, notably Lithocarpus...
, which could be referred to as variously an "oak branch", an "oaken branch", a "branch of oak", or the "branch of an oak [tree]".

Once a branch has been cut or in any other way removed from its source, it is most commonly referred to as a stick, and a stick employed for some purpose (such as walking
Walking
Walking is one of the main gaits of locomotion among legged animals, and is typically slower than running and other gaits. Walking is defined by an 'inverted pendulum' gait in which the body vaults over the stiff limb or limbs with each step...
, spanking
Spanking
Spanking refers to the act of striking the buttocks of another person to cause temporary pain without producing physical injury. It generally involves one person striking the buttocks of another person with an open hand. When an open hand is used, spanking is referred to in some countries as...
, or beating) is often called a rod. Thin, flexible sticks are called switch
Switch (rod)
A switch is a flexible rod, typically used for corporal punishment of the birching type, called switching after it, especially when using a single branch: multiple branches are rather called a rod, a less flexible single rod is rather called a cane, an inflexible one a stick; a paddle is broader...
es, wands, shrags, or vimina (singular vimen).

In Old English there are numerous words for branch, including seten, stofn, telgor, and hrīs. There are also numerous descriptive words, such as blēd (that is, something that has bled, or "bloomed", out), bōgincel (literally "little bough"), ōwæstm (literally "on growth"), and tūdornes (literally "offspringing"). Numerous other words for twigs and boughs abound, including tān, which still surves as the "-toe" in mistletoe.