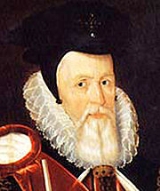 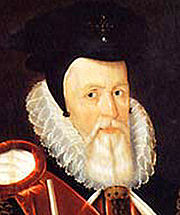 Burghley was built for Sir William Cecil
William Cecil, 1st Baron Burghley
William Cecil, 1st Baron Burghley , KG was an English statesman, the chief advisor of Queen Elizabeth I for most of her reign, twice Secretary of State and Lord High Treasurer from 1572...
, later 1st Baron Burghley, who was Lord High Treasurer
Lord High Treasurer
The post of Lord High Treasurer or Lord Treasurer was an English government position and has been a British government position since the Act of Union of 1707. A holder of the post would be the third highest ranked Great Officer of State, below the Lord High Chancellor and above the Lord President...
to Queen Elizabeth I
Elizabeth I of England
Elizabeth I was queen regnant of England and Ireland from 17 November 1558 until her death. Sometimes called The Virgin Queen, Gloriana, or Good Queen Bess, Elizabeth was the fifth and last monarch of the Tudor dynasty...
, between 1558 and 1587 and modelled on the privy lodgings of Richmond Palace
Richmond Palace
Richmond Palace was a Thameside royal residence on the right bank of the river, upstream of the Palace of Westminster, to which it lay 9 miles SW of as the crow flies. It it was erected c. 1501 within the royal manor of Sheen, by Henry VII of England, formerly known by his title Earl of Richmond,...
. It was subsequently the residence of his descendants, the Earls and Marquesses of Exeter
Marquess of Exeter
Marquess of Exeter is a title that has been created twice, once in the Peerage of England and once in the Peerage of the United Kingdom. The first creation came in the Peerage of England in 1525 for Henry Courtenay, 2nd Earl of Devon...
, and since 1961 is owned by a charitable trust established by the family.

Lady Victoria Leatham, a daughter of the 6th Marquess
David Cecil, 6th Marquess of Exeter
David George Brownlow Cecil, 6th Marquess of Exeter KCMG , styled Lord Burghley before 1956 and also known as David Burghley, was an English athlete, sports official and Conservative Party politician...
and a well-known antiques expert and television personality, ran the House as a Director of the Trust from 1982 to 2007. She has been succeeded by her daughter Miranda Rock.

The house is one of the principal examples of 16th-century English Elizabethan architecture
Elizabethan architecture
Elizabethan architecture is the term given to early Renaissance architecture in England, during the reign of Queen Elizabeth I. Historically, the period corresponds to the Cinquecento in Italy, the Early Renaissance in France, and the Plateresque style in Spain...
and also has a suite of rooms remodelled in the baroque style, with carvings by Grinling Gibbons
Grinling Gibbons
Grinling Gibbons was an English sculptor and wood carver known for his work in England, including St Paul's Cathedral, Blenheim Palace and Hampton Court Palace. He was born and educated in Holland where his father was a merchant...
. The main part of the house has 35 major rooms on the ground and first floors. There are more than 80 lesser rooms and numerous halls, corridors, bathrooms and service areas.

In the 17th century, the open loggia
Loggia
Loggia is the name given to an architectural feature, originally of Minoan design. They are often a gallery or corridor at ground level, sometimes higher, on the facade of a building and open to the air on one side, where it is supported by columns or pierced openings in the wall...
s around the ground floor were enclosed. Although the house was built in the shape of the letter E in honour of Queen Elizabeth, it is now missing its north-west wing. During the period of the 9th Earl
Brownlow Cecil, 9th Earl of Exeter
Brownlow Cecil, 9th Earl of Exeter , known as Lord Burghley from 1725 to 1754, was a British peer and Member of Parliament.-Life:...
's ownership, and under the guidance of "Capability" Brown
Capability Brown
Lancelot Brown , more commonly known as Capability Brown, was an English landscape architect. He is remembered as "the last of the great English eighteenth-century artists to be accorded his due", and "England's greatest gardener". He designed over 170 parks, many of which still endure...
, the south front was raised to alter the roof line, and the north-west wing was demolished to allow better views of the new parkland.

in the Pagoda Room there are portraits of the Cecil family, Queen Elizabeth I, her father Henry VIII and Oliver Cromwell
Oliver Cromwell
Oliver Cromwell was an English military and political leader who overthrew the English monarchy and temporarily turned England into a republican Commonwealth, and served as Lord Protector of England, Scotland, and Ireland....
. Furthermore, there are also many extremely delicately painted walls and ceilings done by Antonio Verrio
Antonio Verrio
The Italian-born Antonio Verrio was responsible for introducing Baroque mural painting into England and served the Crown over a thirty year period.-Career:...

The Domesday village of Burghley was abandoned by 1450. It has been suggested that failure to locate it by archaeology is because it is below Burghley House.

The avenues
Avenue (landscape)
__notoc__In landscaping, an avenue or allée is traditionally a straight route with a line of trees or large shrubs running along each, which is used, as its French source venir indicates, to emphasize the "coming to," or arrival at a landscape or architectural feature...
in the park were all laid out by Capability Brown, paying due respect to pre-existing plantings, some of which were from the 16th century or earlier. Brown also created the park's man-made lake in 1775–80. He discovered a seam of waterproof "blue" clay on the grounds, and was able to enlarge the original 9 acre (36,000 m²) pond to the existing 26 acre (105,000 m²) lake. Its clever design gives the impression of looking at a meandering river. Brown also designed the Lion Bridge at a cost of 1,000 guineas (£1,050) in 1778. Originally, Coade-stone
Coade stone
Lithodipyra , or Coade stone, was ceramic stoneware that was often described as an artificial stone in the late 18th and early 19th centuries. It was used for moulding Neoclassical statues, architectural decorations and garden ornaments that were both of the highest quality and remain virtually...
lions were used as ornamentation but these perished, and the existing stone examples, made by local mason Herbert Gilbert, have been in place since 1844. Queen Victoria and her husband Prince Albert also planted two trees to commemorate their visit. The spade that was used is on show in the bedroom that they stayed in.

Recent developments have included starting a Sculpture garden around the old ice house, and in 2007 a Garden of surprises was created using traditional ideas of water traps, shell grottos and a mirror maze, but all done in a 21st century style.

Burghley House has been featured in several films over the years. It is well known as a location for historical movies. The virtually unaltered Elizabethan façades and a variety of historic interiors make Burghley a frequent destination for film directors.

Films and programmes made at Burghley include: