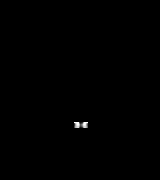 Encyclopedia
Bullvalene is a hydrocarbon
Hydrocarbon
In organic chemistry, a hydrocarbon is an organic compound consisting entirely of hydrogen and carbon. Hydrocarbons from which one hydrogen atom has been removed are functional groups, called hydrocarbyls....
with the chemical formula
Chemical formula
A chemical formula or molecular formula is a way of expressing information about the atoms that constitute a particular chemical compound....
C10H10 with the unusual property that the chemical bond
Chemical bond
A chemical bond is an attraction between atoms that allows the formation of chemical substances that contain two or more atoms. The bond is caused by the electromagnetic force attraction between opposite charges, either between electrons and nuclei, or as the result of a dipole attraction...
s making up the molecule are constantly rearranging as in fluxional molecules. For this reason bullvalene is extensively studied in organic chemistry
Organic chemistry
Organic chemistry is a subdiscipline within chemistry involving the scientific study of the structure, properties, composition, reactions, and preparation of carbon-based compounds, hydrocarbons, and their derivatives...
.

The name bullvalene is derived from the nickname of one the scientists who predicted its properties in 1963 and the underlying concept of valence tautomerism, William "Bull" Doering
William von Eggers Doering
William von Eggers Doering was a Professor Emeritus at Harvard University and the former Chair of its Chemistry Department...
. According to Klärner in 2011 , the weekly seminars organised by Doering were secretly called "Bull sessions" by PhD students and postdocs and were feared by those who were poorly prepared. The name was bestowed on the molecule, in 1961, by two of Doering's Yale graduate students: Mait Jones (now at NYU) and Ron Magid (retired from University of Tennessee). The name celebrates Bill Doering's well-known nickname and was chosen to rhyme with fulvalene
Fulvalene
A fulvalene is a hydrocarbon obtained by formally cross-conjugating two rings through a common exocyclic double bond. The name is derived from the similarly structured fulvenes which lack one ring...
, a molecule of great interest to the research group.

The bullvalene molecule is a cyclopropane
Cyclopropane
Cyclopropane is a cycloalkane molecule with the molecular formula C3H6, consisting of three carbon atoms linked to each other to form a ring, with each carbon atom bearing two hydrogen atoms...
platform with three vinyl
Vinyl
A vinyl compound is any organic compound that contains a vinyl group ,which are derivatives of ethene, CH2=CH2, with one hydrogen atom replaced with some other group...
arms conjoined at a methine
Methine
In chemistry, methine is a trivalent functional group CH, derived formally from methane. The methine group consists of a carbon atom bound by two single bonds and one double bond, where one of the single bonds is to a hydrogen...
group. As a fluxional molecule, bullvalene subject to degenerate Cope rearrangement
Cope rearrangement
The Cope rearrangement is an extensively studied organic reaction involving the [3,3]-sigmatropic rearrangement of 1,5-dienes. It was developed by Arthur C. Cope...
s, with the result that all carbon atoms and hydrogen atoms appear equivalent on the NMR timescale. The number of possible valence tautomers is 10!
Factorial
In mathematics, the factorial of a non-negative integer n, denoted by n!, is the product of all positive integers less than or equal to n...
/3 = 1,209,600.

The compound was first synthesised in 1963 by G. Schröder by photolysis of a dimer of cyclooctatetraene
Cyclooctatetraene
1,3,5,7-Cyclooctatetraene is an unsaturated derivative of cyclooctane, with the formula C8H8. It is also known as [8]annulene. This polyunsaturated hydrocarbon is a colorless to light yellow flammable liquid at room temperature...
with expulsion of benzene
Benzene
Benzene is an organic chemical compound. It is composed of 6 carbon atoms in a ring, with 1 hydrogen atom attached to each carbon atom, with the molecular formula C6H6....
.

The unusual dynamic properties of bullvalene have been examined by dynamic NMR spectroscopy. For example, the proton NMR
Proton NMR
Proton NMR is the application of nuclear magnetic resonance in NMR spectroscopy with respect to hydrogen-1 nuclei within the molecules of a substance, in order to determine the structure of its molecules. In samples where natural hydrogen is used, practically all of the hydrogen consists of the...
spectrum changes from a sharp singlet at 4.2 ppm at higher temperatures to a complex pattern at lower temperatures. This pattern is consistent with an exchange process whose rate k is close to the frequency separation of the four contributing resonances.

In bullvalones one vinyl group in one of the arms in bullvalene is replaced by a keto
Ketone
In organic chemistry, a ketone is an organic compound with the structure RCR', where R and R' can be a variety of atoms and groups of atoms. It features a carbonyl group bonded to two other carbon atoms. Many ketones are known and many are of great importance in industry and in biology...
-methylene
Methylene
Methylene is a chemical species in which a carbon atom is bonded to two hydrogen atoms. Three different possibilities present themselves:* the -CH2- substituent group: e.g., dichloromethane ....
group. In this way it is possible to activate the fluxional state by adding base and deactivate it again by removing the base: 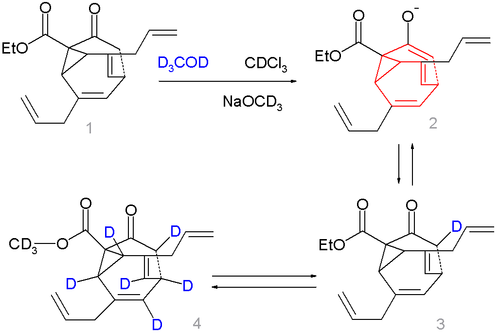 Compound 1 in scheme 2 is not a fluxional molecule but by adding base (sodium methoxide
Sodium methoxide
Sodium methoxide is a chemical compound, with formula CH3ONa. This colourless solid, which is formed by the deprotonation of methanol, is a widely used reagent in industry and the laboratory...
in methanol
Methanol
Methanol, also known as methyl alcohol, wood alcohol, wood naphtha or wood spirits, is a chemical with the formula CH3OH . It is the simplest alcohol, and is a light, volatile, colorless, flammable liquid with a distinctive odor very similar to, but slightly sweeter than, ethanol...
) the ketone converts to the enolate 2 and the fluxional state is switched on. Deuterium labeling is possible forming first 3 a then a complex mixture with up to 7 deuterium atoms, compound 4 being just one of them.

In semibullvalene (C8H8), one ethylene arm is replaced by a single bond. The compound was first prepared by photolysis of barrelene
Barrelene
Barrelene is a bicyclic organic compound with chemical formula C8H8 and systematic name bicyclo[2.2.2]octa-2,5,7-triene. First synthesized and described by H. E. Zimmerman in 1960 the name derives from the obvious resemblance with a barrel, with the staves being three ethylene units attached to two...
in isopentane
Isopentane
Isopentane, C5H12, also called methylbutane or 2-methylbutane, is a branched-chain alkane with five carbon atoms. Isopentane is an extremely volatile and extremely flammable liquid at room temperature and pressure. The normal boiling point is just a few degrees above room temperature and...
with acetone
Acetone
Acetone is the organic compound with the formula 2CO, a colorless, mobile, flammable liquid, the simplest example of the ketones.Acetone is miscible with water and serves as an important solvent in its own right, typically as the solvent of choice for cleaning purposes in the laboratory...
as a photosensitizer in 1966.


Semibullvalene exists only as two valence tautomers (2a and 2b in scheme 3) but in this molecule the Cope rearrangement takes place even at -110 °C, a temperature at which this type of reaction is ordinarily not possible.

One insight into the reaction mechanism
Reaction mechanism
In chemistry, a reaction mechanism is the step by step sequence of elementary reactions by which overall chemical change occurs.Although only the net chemical change is directly observable for most chemical reactions, experiments can often be designed that suggest the possible sequence of steps in...
for this photoreaction is given by an isotope scrambling experiment. The 6 vinylic protons in barrelene 1 are more acidic than the two bridgehead protons and therefore they can be replaced by deuterium
Deuterium
Deuterium, also called heavy hydrogen, is one of two stable isotopes of hydrogen. It has a natural abundance in Earth's oceans of about one atom in of hydrogen . Deuterium accounts for approximately 0.0156% of all naturally occurring hydrogen in Earth's oceans, while the most common isotope ...
with N-deuteriocyclohexylamide. Photolysis of 2 results in the initial formation of an biradical intermediate with a cyclopropane ring formed. This product rearranges to a second intermediate with a more favorable allyl
Allyl
An allyl group is a substituent with the structural formula H2C=CH-CH2R, where R is the connection to the rest of the molecule. It is made up of a methylene , attached to a vinyl group . The name is derived from the Latin word for garlic, Allium sativum. Theodor Wertheim isolated an allyl...
ic radical as two mesomers. Intersystem crossing
Intersystem crossing
Intersystem crossing is a radiationless process involving a transition between two electronic states with different spin multiplicity.-Singlet and triplet states:...
and radical recombination results in equal quantities of semibullvalenes 3 and 4. The new proton distribution with allylic, vinylic and cyclopropanyl protons determined with proton NMR confirms this model.

A synthetic procedure for alkylated semibullvalenes published in 2006 is based on cyclodimerisation of a substituted 1,4-dilithio-1,3-butadiene with copper(I) bromide
Copper(I) bromide
Copper bromide is the chemical compound with the formula CuBr. This diamagnetic solid adopts a polymeric structure akin to that for zinc sulfide. The compound is widely used in the synthesis of organic compounds....
. At 140 °C the ethylated semibullvalene isomerises
Isomerisation
In chemistry isomerisation is the process by which one molecule is transformed into another molecule which has exactly the same atoms, but the atoms are rearranged e.g. A-B-C → B-A-C . In some molecules and under some conditions, isomerisation occurs spontaneously...
to the cyclooctatetraene
Cyclooctatetraene
1,3,5,7-Cyclooctatetraene is an unsaturated derivative of cyclooctane, with the formula C8H8. It is also known as [8]annulene. This polyunsaturated hydrocarbon is a colorless to light yellow flammable liquid at room temperature...
derivative.

In barbaralane one ethylene arm is replaced by a methylene
Methylene
Methylene is a chemical species in which a carbon atom is bonded to two hydrogen atoms. Three different possibilities present themselves:* the -CH2- substituent group: e.g., dichloromethane ....
group and the dynamics are comparable to that of semibullvalene.
The source of this article is wikipedia, the free encyclopedia.  The text of this article is licensed under the GFDL.