When an electron in a molecule with a singlet ground state is excited (via absorption of radiation) to a higher energy level, either an excited singlet state or an excited triplet state will form. A singlet state is a molecular electronic state
Electronic state
Electronic state is a quantum state of a system consisting of electrons . The state with lowest energy is called ground state, states with higher energy are excited states.See Energy level....
such that all electron spins are paired. That is, the spin of the excited electron is still paired with the ground state
Ground state
The ground state of a quantum mechanical system is its lowest-energy state; the energy of the ground state is known as the zero-point energy of the system. An excited state is any state with energy greater than the ground state...
electron (a pair of electrons in the same energy level must have opposite spins, per the Pauli exclusion principle
Pauli exclusion principle
The Pauli exclusion principle is the quantum mechanical principle that no two identical fermions may occupy the same quantum state simultaneously. A more rigorous statement is that the total wave function for two identical fermions is anti-symmetric with respect to exchange of the particles...
). In a triplet state
Triplet state
A spin triplet is a set of three quantum states of a system, each with total spin S = 1 . The system could consist of a single elementary massive spin 1 particle such as a W or Z boson, or be some multiparticle state with total spin angular momentum of one.In physics, spin is the angular momentum...
the excited electron is no longer paired with the ground state electron; that is, they are parallel (same spin). Since excitation to a triplet state involves an additional "forbidden" spin transition, it is more probable that an excited singlet will form upon absorption of radiation. 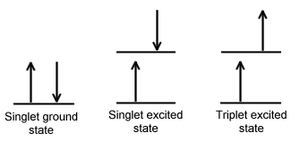 When a singlet state nonradiatively transitions to a triplet state, or conversely a triplet transitions to a singlet, that process is known as intersystem crossing. In essence, the spin of the excited electron is reversed. The probability of this process occurring is more favorable when the vibrational levels of the two excited states overlap, since little or no energy must be gained or lost in the transition. As the spin/orbital interactions in such molecules are substantial and a change in spin is thus more favourable, intersystem crossing is most common in heavy-atom molecules (e.g. those containing iodine
Iodine
Iodine is a chemical element with the symbol I and atomic number 53. The name is pronounced , , or . The name is from the , meaning violet or purple, due to the color of elemental iodine vapor....
or bromine
Bromine
Bromine ") is a chemical element with the symbol Br, an atomic number of 35, and an atomic mass of 79.904. It is in the halogen element group. The element was isolated independently by two chemists, Carl Jacob Löwig and Antoine Jerome Balard, in 1825–1826...
). This process is called "spin-orbit coupling". Simply-stated, it involves coupling of the electron spin with the orbital angular momentum of non-circular orbits. In addition, the presence of paramagnetic species in solution enhances intersystem crossing.

The radiative decay from an excited triplet state back to a singlet state is known as phosphorescence
Phosphorescence
Phosphorescence is a specific type of photoluminescence related to fluorescence. Unlike fluorescence, a phosphorescent material does not immediately re-emit the radiation it absorbs. The slower time scales of the re-emission are associated with "forbidden" energy state transitions in quantum...
. Since a transition in spin multiplicity is observed, phosphorescence is another manifestation of intersystem crossing. The time scale of intersystem crossing is on the order of 10-8 to 10-3 s, one of the slowest forms of relaxation.
The source of this article is wikipedia, the free encyclopedia.  The text of this article is licensed under the GFDL.