Encyclopedia
The Brown Hairstreak is a butterfly
Butterfly
A butterfly is a mainly day-flying insect of the order Lepidoptera, which includes the butterflies and moths. Like other holometabolous insects, the butterfly's life cycle consists of four parts: egg, larva, pupa and adult. Most species are diurnal. Butterflies have large, often brightly coloured...
in the family Lycaenidae
Lycaenidae
The Lycaenidae are the second-largest family of butterflies, with about 6000 species worldwide, whose members are also called gossamer-winged butterflies...
. The range includes most of the Palaearctic. 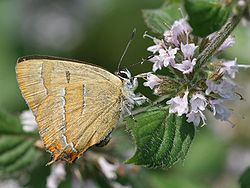 A pretty little butterfly that is found along hedges, scrub, and wood edges but is often overlooked since it spends much of its time high in the tree canopy. Like the Purple Emperor this butterfly uses 'master trees', usually European Ash
European Ash
Fraxinus excelsior , is a species of Fraxinus native to most of Europe with the exception of northern Scandinavia and southern Iberia, and also southwestern Asia from northern Turkey east to the Caucasus and Alborz mountains...
Fraxinus excelsior. Males and unmated females congregate at the tops of isolated trees. Once mated the female descends to lower levels to begin laying her eggs. males rarely descend and both feed mainly on honey dew
Honeydew (secretion)
Honeydew is a sugar-rich sticky liquid, secreted by aphids and some scale insects as they feed on plant sap. When their mouthpart penetrates the phloem, the sugary, high-pressure liquid is forced out of the gut's terminal opening. Honeydew is particularly common as a secretion in the Hemipteran...
. Both sexes are dark brown on the upperside with orange tails. The female also has a bright orange band across both forwings. The undersides are similar in both sexes and are bright orange with two white streaks.

In Europe the female lays her eggs on Blackthorn
Blackthorn
Prunus spinosa is a species of Prunus native to Europe, western Asia, and locally in northwest Africa. It is also locally naturalised in New Zealand and eastern North America....
Prunus spinosa in late August which overwinter, hatching the following spring when the buds are breaking. It has been found that the best way to find breeding sites for this species is to look for the conspicuous white eggs in the winter. The larvae are extremely well camouflaged and feed only at night, remaining motionless during the day. Pupation takes place in leaf litter on the ground in late June or early July and are attractive to ants who will bury them in shallow cells.