Brown-water navy is a term that originated in the United States Navy
United States Navy
The United States Navy is the naval warfare service branch of the United States Armed Forces and one of the seven uniformed services of the United States. The U.S. Navy is the largest in the world; its battle fleet tonnage is greater than that of the next 13 largest navies combined. The U.S...
, referring to the small gunboat
Gunboat
A gunboat is a naval watercraft designed for the express purpose of carrying one or more guns to bombard coastal targets, as opposed to those military craft designed for naval warfare, or for ferrying troops or supplies.-History:...
s and patrol boat
Patrol boat
A patrol boat is a relatively small naval vessel generally designed for coastal defense duties.There have been many designs for patrol boats. They may be operated by a nation's navy, coast guard, or police force, and may be intended for marine and/or estuarine or river environments...
s used in rivers, along with some of the larger ships (including converted WWII LSTs) that supported them as "mother ships," from which they operated. A broader meaning is any naval force
Navy
A navy is the branch of a nation's armed forces principally designated for naval and amphibious warfare; namely, lake- or ocean-borne combat operations and related functions...
that has the capacity to carry out military operation
Military operation
Military operation is the coordinated military actions of a state in response to a developing situation. These actions are designed as a military plan to resolve the situation in the state's favor. Operations may be of combat or non-combat types, and are referred to by a code name for the purpose...
s in river
River
A river is a natural watercourse, usually freshwater, flowing towards an ocean, a lake, a sea, or another river. In a few cases, a river simply flows into the ground or dries up completely before reaching another body of water. Small rivers may also be called by several other names, including...
or littoral
Littoral
The littoral zone is that part of a sea, lake or river that is close to the shore. In coastal environments the littoral zone extends from the high water mark, which is rarely inundated, to shoreline areas that are permanently submerged. It always includes this intertidal zone and is often used to...
environments.

Being a brown-water navy does not imply that it lacks offensive capability, as many small littoral-combat ships today are armed with powerful anti-ship missiles. 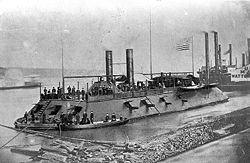 Save for an occasional river patrol boat, the river ironclad navy was all but abolished at the end of the Civil War. Yet the concept of a river defense force lived on in countries and regions where rivers enabled the US to project its military presence, allowing it to protect its foreign interests abroad. US river boats (gunboats) operated in portions of Chinese rivers (sometimes referred to as the "Asiatic Navy") during the 1920s, such as the gunboat , which was sunk in 1937 (by Japanese aircraft, prior to WWII), and the , which was captured by the Japanese in December 1941. The US Navy during that era was, under the terminology used then, protecting US foreign policy and her citizens abroad via "Gunboat diplomacy
Gunboat diplomacy
In international politics, gunboat diplomacy refers to the pursuit of foreign policy objectives with the aid of conspicuous displays of military power — implying or constituting a direct threat of warfare, should terms not be agreeable to the superior force....
". The China gunboat was lost in action March 1942. 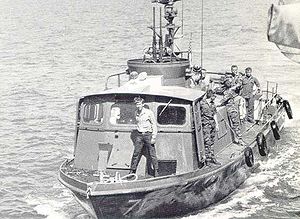 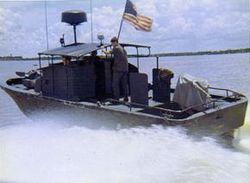 The brown-water navy was largely successful in its tactics to combat infiltration and weapons smuggling during its existence between 1965 and 1970. The units were formalized in January 1967 with the 2nd Brigade, 9th Infantry Division arriving under the command of Major General William Fulton. Later that same year, in combination with US Navy Task Force 117 they formed the Mobile Riverine Force. In 1970, for the last time since the Civil War, the Navy stood down the last of its brown-water navy units; as they were turned over to the South Vietnamese Government under the Vietnamization
Vietnamization
Vietnamization was a policy of the Richard M. Nixon administration during the Vietnam War, as a result of the Viet Cong's Tet Offensive, to "expand, equip, and train South Vietnam's forces and assign to them an ever-increasing combat role, at the same time steadily reducing the number of U.S....
policy. 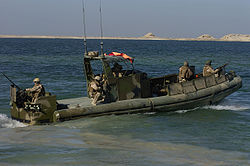 Although not formalized as a Brown Water Navy by the US Navy, U.S. Marines
United States Marine Corps
The United States Marine Corps is a branch of the United States Armed Forces responsible for providing power projection from the sea, using the mobility of the United States Navy to deliver combined-arms task forces rapidly. It is one of seven uniformed services of the United States...
began patrolling the inland waters of Iraq
Iraq
Iraq ; officially the Republic of Iraq is a country in Western Asia spanning most of the northwestern end of the Zagros mountain range, the eastern part of the Syrian Desert and the northern part of the Arabian Desert....
soon after the beginning of the Iraq War, using a variety of patrol boats. In 2004 the Marines received a new type of fast boat, the small unit riverine craft
Small unit riverine craft
The small unit riverine craft is rigid-hull, armed and armored patrol boat used by the U.S. Marines and U.S. Navy to maintain control of rivers and inland waterways....
(SURC), to patrol the waters of the Euphrates
Euphrates
The Euphrates is the longest and one of the most historically important rivers of Western Asia. Together with the Tigris, it is one of the two defining rivers of Mesopotamia...
and deny water passage to the insurgents. Beginning in 2006, the Navy established the Riverine Squadrons
United States Navy Riverine Squadron
The Riverine Squadrons of the United States Navy are elements of the Navy Expeditionary Combat Command . According to the Navy: “The Navy’s Riverine force focuses on conducting Maritime Security Operations and Theater Security Cooperation in a riverine area of operations or other suitable area...
to assume this task from the Marines. A Riverine Squadron was deployed to Iraq in March 2007 and has been patrolling the waters of the river around the Haditha Dam
Haditha Dam
The Haditha Dam or Qadisiya Dam is an earth-fill dam on the Euphrates, north of Haditha , creating Lake Qadisiyah . The dam is just over long and high. The purpose of the dam is to generate hydroelectricity, regulate the flow of the Euphrates and provide water for irrigation...
.