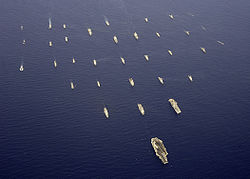 The term blue-water navy is a colloquialism
Colloquialism
A colloquialism is a word or phrase that is common in everyday, unconstrained conversation rather than in formal speech, academic writing, or paralinguistics. Dictionaries often display colloquial words and phrases with the abbreviation colloq. as an identifier...
used to describe a maritime force
Navy
A navy is the branch of a nation's armed forces principally designated for naval and amphibious warfare; namely, lake- or ocean-borne combat operations and related functions...
capable of operating across the deep waters of open oceans. While what actually constitutes such a force remains undefined, there is a requirement for the ability to exercise sea control at wide ranges. The term used in the United Kingdom
United Kingdom
The United Kingdom of Great Britain and Northern IrelandIn the United Kingdom and Dependencies, other languages have been officially recognised as legitimate autochthonous languages under the European Charter for Regional or Minority Languages...
is expeditionary.


Capabilities of a blue-water navy

In modern warfare, the term blue-water navy implies self-contained force protection from sub-surface, surface and airborne threats and a sustainable logistic reach, allowing a persistent presence at range. In some maritime environments, such a defence is given by natural obstacles, such as the Arctic
Arctic
The Arctic is a region located at the northern-most part of the Earth. The Arctic consists of the Arctic Ocean and parts of Canada, Russia, Greenland, the United States, Norway, Sweden, Finland, and Iceland. The Arctic region consists of a vast, ice-covered ocean, surrounded by treeless permafrost...
ice shelf
Ice shelf
An ice shelf is a thick, floating platform of ice that forms where a glacier or ice sheet flows down to a coastline and onto the ocean surface. Ice shelves are only found in Antarctica, Greenland and Canada. The boundary between the floating ice shelf and the grounded ice that feeds it is called...
.

Few navies can operate as blue-water navies, but "many States are converting green-water navies to blue-water navies and this will increase military use of foreign Exclusive Economic Zone
Exclusive Economic Zone
Under the law of the sea, an exclusive economic zone is a seazone over which a state has special rights over the exploration and use of marine resources, including production of energy from water and wind. It stretches from the seaward edge of the state's territorial sea out to 200 nautical...
s [littoral zone to 200 nautical miles (370 km)] with possible repercussions for the EEZ regime."

As there is no clear definition of a blue-water navy, the status is disputed. Usually it is considered to be strongly linked to the maintenance of aircraft carrier
Aircraft carrier
An aircraft carrier is a warship designed with a primary mission of deploying and recovering aircraft, acting as a seagoing airbase. Aircraft carriers thus allow a naval force to project air power worldwide without having to depend on local bases for staging aircraft operations...
s capable of operating in the oceans. "In the early 80s there was a bitter and very public battle fought over whether or not to replace Australia's last aircraft carrier, HMAS Melbourne. Senior navy personnel warned without a carrier, Australia would be vulnerable to all types of threat. One ex-Chief of Navy went so far as to claim that Australia "would no longer have a blue-water navy (one capable of operating away from friendly coasts)."

The term blue-water navy should not be confused with the brown-, green- and blue-water capability of a ship. U.S. Navy Chief of Naval Operations
Chief of Naval Operations
The Chief of Naval Operations is a statutory office held by a four-star admiral in the United States Navy, and is the most senior uniformed officer assigned to serve in the Department of the Navy. The office is a military adviser and deputy to the Secretary of the Navy...
Admiral
Admiral
Admiral is the rank, or part of the name of the ranks, of the highest naval officers. It is usually considered a full admiral and above vice admiral and below admiral of the fleet . It is usually abbreviated to "Adm" or "ADM"...
Michael Mullen
Michael Mullen
Michael Glenn "Mike" Mullen is a retired United States Navy four-star admiral, who served as the 17th Chairman of the Joint Chiefs of Staff from October 1, 2007 to September 30, 2011. Mullen previously served as the Navy's 28th Chief of Naval Operations from July 22, 2005 to September 29, 2007...
pointed out in an interview with KQV (Pittsburgh
Pittsburgh, Pennsylvania
Pittsburgh is the second-largest city in the US Commonwealth of Pennsylvania and the county seat of Allegheny County. Regionally, it anchors the largest urban area of Appalachia and the Ohio River Valley, and nationally, it is the 22nd-largest urban area in the United States...
): "We are looking at, in addition to the blue-water ships which I would characterize and describe as our aircraft carriers and other ships that support that kind of capability, we're also looking to develop capability in what I call the green-water and the brown-water, and the brown-water is really the rivers . . . These are challenges we all have, and we need to work together to ensure that the sea lanes are secure." The capability for blue, green or brown water depends on the vessel's specifications. For example, vessels of a green-water navy can often operate in blue water. A number of nations have extensive maritime assets but lack the capability to maintain the required sustainable logistic reach. Some of them join coalition task groups in blue-water deployments.

While a blue-water navy can project sea control power into another nation's littoral, it remains susceptible to threats from less capable forces. Maintenance and logistics at range yield high costs, and there might be a saturation advantage over a deployed force through the use of land-based air or surface-to-surface missile
Surface-to-surface missile
A surface-to-surface missile is a guided projectile launched from a hand-held, vehicle mounted, trailer mounted or fixed installation or from a ship. They are often powered by a rocket motor or sometimes fired by an explosive charge, since the launching platform is typically stationary or moving...
assets, diesel-electric submarines, or asymmetric tactics such as Fast Inshore Attack Craft. An example of this vulnerability was the October 2000 USS Cole bombing
USS Cole bombing
The USS Cole Bombing, or the USS Cole Incident, was a suicide attack against the United States Navy destroyer on October 12, 2000 while it was harbored and refueled in the Yemeni port of Aden. Seventeen American sailors were killed, and 39 were injured...
in Aden
Aden
Aden is a seaport city in Yemen, located by the eastern approach to the Red Sea , some 170 kilometres east of Bab-el-Mandeb. Its population is approximately 800,000. Aden's ancient, natural harbour lies in the crater of an extinct volcano which now forms a peninsula, joined to the mainland by a...
.

These are navies that have successfully used the capabilities of their blue-water navies to exercise control at high seas and from there have projected power into other nations' littoral waters.