Encyclopedia
The littoral zone is that part of a sea, lake or river that is close to the shore. In coastal environments the littoral zone extends from the high water mark
Ordinary high water mark
Ordinary high water mark refers to the highest level reached by a body of water that has been maintained for a sufficient period of time to leave evidence on the landscape. It may be indicated by destruction of terrestrial vegetation, the presence of marks on trees or debris deposits...
, which is rarely inundated, to shoreline areas that are permanently submerged. It always includes this intertidal zone
Intertidal zone
The intertidal zone is the area that is above water at low tide and under water at high tide . This area can include many different types of habitats, with many types of animals like starfish, sea urchins, and some species of coral...
and is often used to mean the same as the intertidal zone. However, the meaning of "littoral zone" can extend well beyond the intertidal zone.

There is no single definition. What is regarded as the full extent of the littoral zone, and the way the littoral zone is divided into subregions, varies in different contexts (lakes and rivers have their own definitions). The use of the term also varies from one part of the world to another, and between different disciplines. For example, military commanders speak of the littoral in ways that are quite different from marine biologists.

The adjacency of water gives a number of distinctive characteristics to littoral regions. The erosive
Erosion
Erosion is when materials are removed from the surface and changed into something else. It only works by hydraulic actions and transport of solids in the natural environment, and leads to the deposition of these materials elsewhere...
power of water results in particular types of landform
Landform
A landform or physical feature in the earth sciences and geology sub-fields, comprises a geomorphological unit, and is largely defined by its surface form and location in the landscape, as part of the terrain, and as such, is typically an element of topography...
s, such as sand dunes, and estuaries
Estuary
An estuary is a partly enclosed coastal body of water with one or more rivers or streams flowing into it, and with a free connection to the open sea....
. The natural movement of the littoral along the coast is called the littoral drift. Biologically, the ready availability of water enables a greater variety of plant and animal life, and the additional local humidity
Humidity
Humidity is a term for the amount of water vapor in the air, and can refer to any one of several measurements of humidity. Formally, humid air is not "moist air" but a mixture of water vapor and other constituents of air, and humidity is defined in terms of the water content of this mixture,...
due to evaporation usually creates a microclimate
Microclimate
A microclimate is a local atmospheric zone where the climate differs from the surrounding area. The term may refer to areas as small as a few square feet or as large as many square miles...
supporting unique types of organisms.

The word "littoral" is used both as a noun
Noun
In linguistics, a noun is a member of a large, open lexical category whose members can occur as the main word in the subject of a clause, the object of a verb, or the object of a preposition .Lexical categories are defined in terms of how their members combine with other kinds of...
and an adjective
Adjective
In grammar, an adjective is a 'describing' word; the main syntactic role of which is to qualify a noun or noun phrase, giving more information about the object signified....
. It derives from the Latin noun litus, litoris, meaning "shore". (The doubled 't' is a late medieval innovation and the word is sometimes seen in the more classical-looking spelling 'litoral'.)


In oceanography and marine biology 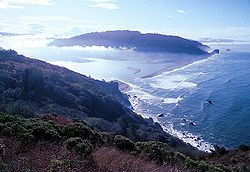 In oceanography
Oceanography
Oceanography , also called oceanology or marine science, is the branch of Earth science that studies the ocean...
and marine biology
Marine biology
Marine biology is the scientific study of organisms in the ocean or other marine or brackish bodies of water. Given that in biology many phyla, families and genera have some species that live in the sea and others that live on land, marine biology classifies species based on the environment rather...
, the idea of the littoral zone is extended roughly to the edge of the continental shelf. Starting from the shoreline, the littoral zone begins at the spray region just above the high tide mark. From here, it moves to the intertidal region between the high and low water marks, and then out as far as the edge of the continental shelf
Continental shelf
The continental shelf is the extended perimeter of each continent and associated coastal plain. Much of the shelf was exposed during glacial periods, but is now submerged under relatively shallow seas and gulfs, and was similarly submerged during other interglacial periods. The continental margin,...
. These three subregions are called, in order, the supralittoral zone, the eulittoral zone and the sublittoral zone.

The supralittoral zone (also called the splash, spray, or supratidal zone) is the area above the spring high tide line that is regularly splashed, but not submerged by ocean water. Seawater penetrates these elevated areas only during storms with high tides.

Organisms here must cope also with exposure to bad air, fresh water from rain, cold, heat and predation
Predation
In ecology, predation describes a biological interaction where a predator feeds on its prey . Predators may or may not kill their prey prior to feeding on them, but the act of predation always results in the death of its prey and the eventual absorption of the prey's tissue through consumption...
by land animals and seabirds. At the top of this area, patches of dark lichen
Lichen
Lichens are composite organisms consisting of a symbiotic organism composed of a fungus with a photosynthetic partner , usually either a green alga or cyanobacterium...
s can appear as crusts on rocks. Some types of periwinkles
Common Periwinkle
The common periwinkle or winkle, scientific name Littorina littorea, is a species of small edible sea snail, a marine gastropod mollusk which has gills and an operculum, and is classified within the family Littorinidae, the periwinkles....
, Neritidae
Neritidae
Neritidae, common name the nerites, is a taxonomic family of small to medium-sized saltwater and freshwater snails which have a gill and a distinctive operculum, marine, brackish water and freshwater gastropod mollusks in the order Neritoida....
and detritus feeding Isopoda commonly inhabit the lower supralitoral.

The eulittoral zone (also called the midlittoral or mediolittoral zone) is the intertidal zone, also known as the foreshore. It extends from the spring high tide line, which is rarely inundated, to the neap low tide line, which is rarely not inundated. The wave action and turbulence of recurring tides shapes and reforms cliffs, gaps, and caves, offering a huge range of habitats for sedentary organisms. Protected rocky shorelines usually show a narrow almost homogenous eulittoral strip, often marked by the presence of barnacle
Barnacle
A barnacle is a type of arthropod belonging to infraclass Cirripedia in the subphylum Crustacea, and is hence related to crabs and lobsters. Barnacles are exclusively marine, and tend to live in shallow and tidal waters, typically in erosive settings. They are sessile suspension feeders, and have...
s. Exposed sites show a wider extension and are often divided into further zones. For more on this, see intertidal ecology
Intertidal ecology
Intertidal ecology is the study of intertidal ecosystems, where organisms live between the low and high tide lines. At low tide, the intertidal is exposed whereas at high tide, the intertidal is underwater...
.

The sublittoral zone, also called the neritic zone, starts immediately below the eulittoral zone. This zone is permanently covered with seawater.

In physical oceanography, the sublittoral zone refers to coastal regions with significant tidal flows and energy dissipation, including non-linear flows, internal waves, river outflows and oceanic fronts. In practice, this typically extends to the edge of the continental shelf
Continental shelf
The continental shelf is the extended perimeter of each continent and associated coastal plain. Much of the shelf was exposed during glacial periods, but is now submerged under relatively shallow seas and gulfs, and was similarly submerged during other interglacial periods. The continental margin,...
, with depths around 200 metres.

In marine biology, the sublittoral refers to the areas where sunlight reaches the ocean floor, that is, where the water is never so deep as to take it out of the photic zone
Photic zone
The photic zone or euphotic zone is the depth of the water in a lake or ocean that is exposed to sufficient sunlight for photosynthesis to occur...
. This results in high primary production
Primary production
400px|thumb|Global oceanic and terrestrial photoautotroph abundance, from September [[1997]] to August 2000. As an estimate of autotroph biomass, it is only a rough indicator of primary production potential, and not an actual estimate of it...
and makes the sublittoral zone the location of the majority of sea life. As in physical oceanography, this zone typically extends to the edge of the continental shelf
Continental shelf
The continental shelf is the extended perimeter of each continent and associated coastal plain. Much of the shelf was exposed during glacial periods, but is now submerged under relatively shallow seas and gulfs, and was similarly submerged during other interglacial periods. The continental margin,...
. The benthic zone in the sublittoral is much more stable than in the intertidal zone; temperature, water pressure, and the amount of sunlight remain fairly constant. Sublittoral corals do not have to deal with as much change as intertidal corals. Corals can live in both zones, but they are more common in the sublittoral zone.

Within the sublittoral, marine biologists also identify the following:

Shallower region of the sublittoral zone, extending not far from the shore, are sometimes referred to as the subtidal zone.