Brindle is a coat
Coat (animal)
Coat, or the nature and quality of a show mammal's pelage, is important to the animal fancy in the judging of the animal, particularly at conformation dog shows, cat shows and horse shows...
coloring pattern in animals, particularly dog
Dog
The domestic dog is a domesticated form of the gray wolf, a member of the Canidae family of the order Carnivora. The term is used for both feral and pet varieties. The dog may have been the first animal to be domesticated, and has been the most widely kept working, hunting, and companion animal in...
s, cat
Cat
The cat , also known as the domestic cat or housecat to distinguish it from other felids and felines, is a small, usually furry, domesticated, carnivorous mammal that is valued by humans for its companionship and for its ability to hunt vermin and household pests...
s, cattle
Cattle
Cattle are the most common type of large domesticated ungulates. They are a prominent modern member of the subfamily Bovinae, are the most widespread species of the genus Bos, and are most commonly classified collectively as Bos primigenius...
, guinea pigs, crested geckos and, rarely, horse
Horse
The horse is one of two extant subspecies of Equus ferus, or the wild horse. It is a single-hooved mammal belonging to the taxonomic family Equidae. The horse has evolved over the past 45 to 55 million years from a small multi-toed creature into the large, single-toed animal of today...
s. It is sometimes described as "tiger striped", although the brindle pattern is more subtle than that of a tiger
Tiger
The tiger is the largest cat species, reaching a total body length of up to and weighing up to . Their most recognizable feature is a pattern of dark vertical stripes on reddish-orange fur with lighter underparts...
's coat. The streaks of color are usually darker than the base coat, which is often tawny or grayish, although very dark markings can be seen on a coat that is only slightly lighter.

The brindle pattern may also take the place of tan in tricolor coats of some dog breeds (such as Basenji
Basenji
The Basenji is a breed of hunting dog that was bred from stock originating in central Africa. Most of the major kennel clubs in the English-speaking world place the breed in the Hound Group; more specifically, it may be classified as belonging to the sighthound type...
s). This coloration looks very similar to tricolor, and can be distinguished only at close range. Dogs of this color are often described as "trindle". It can also occur in combination with merle
Merle (coat colour in dogs)
Merle is a pattern in a dogs coat, though is commonly incorrectly referred to as a color.- Description :Merle can affect all coat colors but the colors most commonly seen that are affected are brown and black, when affected by merle they are usually called liver and blue, though some call liver red...
in the points, or as a brindle merle, in breeds such as the Cardigan Welsh Corgi
Cardigan Welsh Corgi
The Cardigan Welsh corgi is one of two separate dog breeds known as Welsh corgis that originated in Wales, the other being the Pembroke Welsh corgi. It is one of the oldest herding breeds.-Characteristics:...
, although the latter is not acceptable in the show ring. The "dark" markings are black or the dilutions gray (called blue) or brown (sometimes called red). 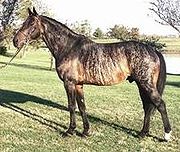 In horses, brindle coloring is extremely rare and may be either caused by or somehow linked to chimerism, resulting in an animal with two sets of DNA
DNA
Deoxyribonucleic acid is a nucleic acid that contains the genetic instructions used in the development and functioning of all known living organisms . The DNA segments that carry this genetic information are called genes, but other DNA sequences have structural purposes, or are involved in...
, with the brindle pattern being an expression of two different sets of equine coat color
Equine coat color
Horses exhibit a diverse array of coat colors and distinctive markings. A specialized vocabulary has evolved to describe them.While most horses remain the same color throughout life, a few, over the course of several years, will develop a different coat color from that with which they were born...
genes in one horse. In some horses, the pattern seems to be inherited, indicating that one or more genes are responsible. To date, there is no evidence that there is an actual gene in the Equine species that causes the Brindle pattern. If there is a gene for brindling in equine, it has not yet been isolated.

It consists of irregular stripes extending vertically over the horse's body, as well as horizontally around the legs. Brindle horses can also have a dorsal stripe. It usually does not affect the head and legs as much as the body, with the heaviest concentrations of brindling being on the neck, shoulders and hindquarters. The coloring has been documented in the past. In the early 19th century at the Zoological Museum of Academy Sciences, a Russian cab horse of brindle coloring was mounted and put on display in the Zoological Museum in Leningrad, Russia.

The brindling pattern found in horses could be described as vertical stripes that are found along the neck, back, hindquarters, and upper legs. The horse's head is usually a solid color and is not affected by the striping. The brindling pattern has no effect on dark points on horses. Some brindle-colored horses are more eye-catching than others.

With this rare coat pattern there is a base coat that covers the entire body of the horse. This base coat color can be any color, but recorded examples have been bay, chestnut
Chestnut (coat)
Chestnut is a hair coat color of horses consisting of a reddish-to-brown coat with a mane and tail the same or lighter in color than the coat. Genetically and visually, chestnut is characterized by the absolute absence of true black hairs...
, palomino
Palomino
Palomino is a coat color in horses, consisting of a gold coat and white mane and tail. Genetically, the palomino color is created by a single allele of a dilution gene called the cream gene working on a "red" base coat...
, and dun
Dun gene
The dun gene is a dilution gene that affects both red and black pigments in the coat color of a horse. The dun gene has the ability to affect the appearance of all black, bay, or chestnut -based horses to some degree by lightening the base body coat and suppressing the underlying base color to the...
. Earliest documented cases were said to have red dun or grulla as a base coat. Over top of the base color is either a lighter or darker color over top giving the appearance of stripes.

Brindle coloring exists in cattle
Cattle
Cattle are the most common type of large domesticated ungulates. They are a prominent modern member of the subfamily Bovinae, are the most widespread species of the genus Bos, and are most commonly classified collectively as Bos primigenius...
. For Crested Gecko
New Caledonian Crested Gecko
The Crested Gecko, New Caledonian Crested Gecko, Guichenot's Giant Gecko or Eyelash Gecko, Rhacodactylus ciliatus, is a species of gecko native to southern New Caledonia. This species was thought extinct until it was rediscovered in 1994...
s, the term "brindle" is used to describe an extreme tiger morph
Polymorphism (biology)
Polymorphism in biology occurs when two or more clearly different phenotypes exist in the same population of a species — in other words, the occurrence of more than one form or morph...
, can be used in conjuncture with any of the morph colors 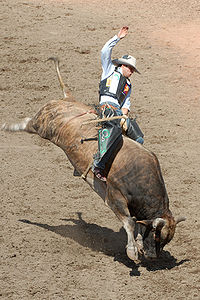 The word brindle comes from brindled, originally brinded, from an old Scandinavian word. See Wiktionary.
The opening of Act Four, Scene One of William Shakespeare
William Shakespeare
William Shakespeare was an English poet and playwright, widely regarded as the greatest writer in the English language and the world's pre-eminent dramatist. He is often called England's national poet and the "Bard of Avon"...
's Macbeth
Macbeth
The Tragedy of Macbeth is a play by William Shakespeare about a regicide and its aftermath. It is Shakespeare's shortest tragedy and is believed to have been written sometime between 1603 and 1607...
is often thought to refer to a brindled cat because it contains the word brinded:
"Thrice the brinded cat hath mew'd." However, in this context, the word "brinded" means branded, as if with fire. The Elizabethan word for "brindled" is "streaked."