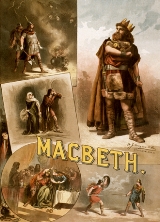 Overview
The Tragedy of Macbeth (commonly called Macbeth) is a play by William Shakespeare
William Shakespeare
William Shakespeare was an English poet and playwright, widely regarded as the greatest writer in the English language and the world's pre-eminent dramatist. He is often called England's national poet and the "Bard of Avon"...
about a regicide
Regicide
The broad definition of regicide is the deliberate killing of a monarch, or the person responsible for the killing of a monarch. In a narrower sense, in the British tradition, it refers to the judicial execution of a king after a trial...
and its aftermath. It is Shakespeare's shortest tragedy
Shakespearean tragedy
Shakespeare wrote tragedies from the beginning of his career. One of his earliest plays was the Roman tragedy Titus Andronicus, which he followed a few years later with Romeo and Juliet. However, his most admired tragedies were written in a seven-year period between 1601 and 1608...
and is believed to have been written sometime between 1603 and 1607. The earliest account of a performance of what was probably Shakespeare's play is April 1611, when Simon Forman
Simon Forman
Simon Forman was arguably the most popular Elizabethan astrologer, occultist and herbalist active in London during the reigns of Queen Elizabeth I and James I of England. His reputation, however, was severely tarnished after his death when he was implicated in the plot to kill Sir Thomas Overbury...
recorded seeing such a play at the Globe Theatre
Globe Theatre
The Globe Theatre was a theatre in London associated with William Shakespeare. It was built in 1599 by Shakespeare's playing company, the Lord Chamberlain's Men, and was destroyed by fire on 29 June 1613...
. It was first published in the Folio of 1623
First Folio
Mr. William Shakespeares Comedies, Histories, & Tragedies. is the 1623 published collection of William Shakespeare's plays. Modern scholars commonly refer to it as the First Folio....
, possibly from a prompt book
Prompt book
The prompt book, also called promptbook, transcript, the bible or sometimes simply "the book," is the copy of a production script that contains the information necessary to create the production from the ground up...
.

Lady Macbeth fears that her husband is not strong enough to achieve his ambitions and therefore calls on evil spirits to help her think of a plan to m...

Has anyone seen Trevor Nunn's version of Macbeth - Act 5 Scene 8? ^_- (Final Battle against Macbeth and Macduff)

How does Macbeth succeed in the politics of Scotland?

what is the first discussion about in macbeth

what is Macbeths plan for dealing with the attacking troops?
More

What are some of the different ways of interpreting MacBeth as a tragedy?

What are some of the themes of MacBeth?

Why did Macbeth lost his feelings toward lady Macbeth?

How was she evil

The role of witchcraft in Macbeth
More

First Witch: When shall we three meet againIn thunder, lightning, or in rain?Second Witch: When the hurlyburly's done,When the battle's lost and won.

Fair is foul, and foul is fair;Hover through the fog and filthy air.

The merciless Macdonwald(Worthy to be a rebel, — for, to that,The multiplying villainies of natureDo swarm upon him) from the Western IslesOf kerns and gallowglasses is supplied;And Fortune, on his damned quarrel smiling,Showed like a rebel's whore: but all's too weak:For brave Macbeth (well he deserves that name)Disdaining Fortune, with his brandish'd steel,Which smoked with bloody execution,Like valour's minion,Carv'd out his passage.

Sleep shall neither night nor dayHang upon his pent-house lid.

So foul and fair a day I have not seen.

If you can look into the seeds of time,And say which grain will grow, and which will not,Speak.

The earth hath bubbles, as water has,And these are of them.

Or have we eaten on the insane rootThat takes the reason prisoner?