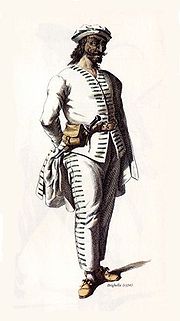 Brighella is a comic, masked character from the Commedia dell'arte
Commedia dell'arte
Commedia dell'arte is a form of theatre characterized by masked "types" which began in Italy in the 16th century, and was responsible for the advent of the actress and improvised performances based on sketches or scenarios. The closest translation of the name is "comedy of craft"; it is shortened...
. His early costume
Costume
The term costume can refer to wardrobe and dress in general, or to the distinctive style of dress of a particular people, class, or period. Costume may also refer to the artistic arrangement of accessories in a picture, statue, poem, or play, appropriate to the time, place, or other circumstances...
consisted of loosely-fitting, white smock
Smock
Smock may refer to one of the following:* Smock-frock, a coatlike outer garment, often worn to protect the clothes* Smocking, an embroidery technique in which the fabric is gathered with thread or embroidery floss, then embroidered with decorative stitches to hold the gathers in place*Chemise, a...
and pants with green trim and was often equipped with a battachio or slapstick
Slapstick
Slapstick is a type of comedy involving exaggerated violence and activities which may exceed the boundaries of common sense.- Origins :The phrase comes from the batacchio or bataccio — called the 'slap stick' in English — a club-like object composed of two wooden slats used in Commedia dell'arte...
, or else with a wooden sword. Later he took to wearing a sort of livery
Livery
A livery is a uniform, insignia or symbol adorning, in a non-military context, a person, an object or a vehicle that denotes a relationship between the wearer of the livery and an individual or corporate body. Often, elements of the heraldry relating to the individual or corporate body feature in...
with a matching cape. He wore a greenish half-mask
Mask
A mask is an article normally worn on the face, typically for protection, disguise, performance or entertainment. Masks have been used since antiquity for both ceremonial and practical purposes...
(traditionally olive-green) displaying a look of preternatural lust
Lust
Lust is an emotional force that is directly associated with the thinking or fantasizing about one's desire, usually in a sexual way.-Etymology:The word lust is phonetically similar to the ancient Roman lustrum, which literally meant "purification"...
and greed. He evolved out of the general Zanni
Zanni
Zanni or Zani is a character type of Commedia dell'arte best known as an astute servant and trickster. The Zanni comes from the countryside. The Zanni is known to be a “dispossessed immigrant worker”. "Immigrant" in Italy at the time of the city-states, did not necessarily mean someone from...
, as evidenced by his costume, and came into his own around the start of the 16th century.

He is loosely categorized as one of the zanni
Zanni
Zanni or Zani is a character type of Commedia dell'arte best known as an astute servant and trickster. The Zanni comes from the countryside. The Zanni is known to be a “dispossessed immigrant worker”. "Immigrant" in Italy at the time of the city-states, did not necessarily mean someone from...
or servant characters though he often was portrayed as a member of the middle class
Middle class
The middle class is any class of people in the middle of a societal hierarchy. In Weberian socio-economic terms, the middle class is the broad group of people in contemporary society who fall socio-economically between the working class and upper class....
such as a tavern
Tavern
A tavern is a place of business where people gather to drink alcoholic beverages and be served food, and in some cases, where travelers receive lodging....
owner: his character could be adapted to whatever the needs to the scenario might be, just as Brighella himself is adaptable to any circumstance. He is essentially Arlecchino's smarter and much more vindictive older brother. As in a stereotype of those who have risen from poverty
Poverty
Poverty is the lack of a certain amount of material possessions or money. Absolute poverty or destitution is inability to afford basic human needs, which commonly includes clean and fresh water, nutrition, health care, education, clothing and shelter. About 1.7 billion people are estimated to live...
, he is often most cruel to those beneath him on the social ladder; he even goes so far as to kill on occasion. In later versions of his character these violent and malicious traits were lessened substantially. Pierre Louis Duchartre, in his The Italian Comedy theorizes that in France, the gentilified Brighella eventually culminated in the character of Figaro
Le Barbier de Séville
The Barber of Seville or the Useless Precaution is a French play by Pierre Beaumarchais, with original music by Antoine-Laurent Baudron. It was initially conceived as a comic opera, and was rejected as such in 1772 by the Comédie-Italienne...
, known from the plays and operas.

He's a masterful liar, and can make up a spur-of-the moment lie for any situation. He is an inveterate schemer, and he is good at what he does. If his plans failed, it was almost always out of luck on behalf of the other characters. When he's a servant, he will either serve his master devotedly or look for every opportunity to ruin and take advantage of him as he happens to see fit—whatever will gain the greatest advantage for himself and himself alone. He is fond of money, but spends it rapidly, and tends to be especially fond of the drink. To quote Duchartre again: "Brighella believes in no one but the hangman, he respects nothing and loves nothing but his own pleasure." In fact, he has few good qualities save for his ability to entertain the audience.

His character is usually from uptown Milano or Bergamo, and in the original Italian would often speak with the local accent. He could be very witty and fond of wordplay. He is also an accomplished singer, dancer and musician, and sometimes would play the guitar on stage.

His name comes from a word which can mean "bother" or "contention" in Italian (Florio's 1611 Italian-English Dictionary defines Briga as meaning "a brable, a braule, a contention".) His name in English would be something like "Fighty" or "Brawly."
It is notable that the word attaccabrighe ("hellraiser") utilizes the same element as his name.

A list of variations on the character, according to Duchartre, are:

Beltrame
Beltrame
Beltrame is a traditional character of the Italian commedia dell'arte associated to the city of Milan, and dating back to the 16th-17th century or earlier...
: from the 17th century, a "wilfully blind husband and rascal as crafty as Brighella." He was Milanese and spoke that dialect. As part of his costume he apparently wore a distinctive large tunic.

Scapin, or Scapino
Scapino
Scapino, Scappino, or Scapin, is a zanni character from the commedia dell'arte. His name is related to the English word "escape" in reference to his tendency to flee from fights, even those he himself begins. He has been dated to the last years of the 16th century, and his creation is sometimes...
: A much more nervous and cowardly version of Brighella. See his entry.

Mezzetino
Mezzetino
Mezzetino, also Mezzettino, is a character from the commedia dell'arte and is considered by Duchartre to be a variant on the stock character Brighella. His name means "Half-Measure " in Medieval Italian, and he is sometimes called in French and English plays "Mezzetin"...
: A gentler version of Brighella, fond of the ladies even if they weren't fond of him. See his entry.

Flautino: A musical Brighella,( often singing a cappella
A cappella
A cappella music is specifically solo or group singing without instrumental sound, or a piece intended to be performed in this way. It is the opposite of cantata, which is accompanied singing. A cappella was originally intended to differentiate between Renaissance polyphony and Baroque concertato...
. It's said the actor Giovanni Gherard, in this role, was able to perform the part of an entire orchestra with his voice alone.

Sbrigani: Sometimes the exact opposite of Brighella, otherwise an identical character; like twins. Frequently appeared alongside Brighella onstage.

Franca Trippa, Francatrippa or Francatrippe: created in the late 16th century, spoke a mixture of Bolognese and Tuscan dialects. An upper-class Brighella. Could be capable of gymnastic or other physical feats.