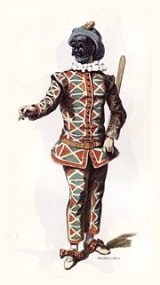 Overview
Zanni or Zani is a character type of Commedia dell'arte
Commedia dell'arte
Commedia dell'arte is a form of theatre characterized by masked "types" which began in Italy in the 16th century, and was responsible for the advent of the actress and improvised performances based on sketches or scenarios. The closest translation of the name is "comedy of craft"; it is shortened...
best known as an astute servant and trickster. The Zanni comes from the countryside. The Zanni is known to be a “dispossessed immigrant worker”. Throughout time, the Zanni grew to be a popular figure who were first seen in commedia as early as the fourteenth century.
The name Zanni (as well as Zuan) is a Venetian variant of the name Gianni and is common in the Lombard-Venetian countryside which provided most of the servants to the wealthy nobles and merchants of Venice.