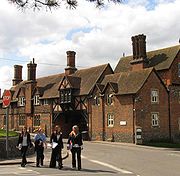 Bradfield College is a coeducational independent school
Independent school
An independent school is a school that is independent in its finances and governance; it is not dependent upon national or local government for financing its operations, nor reliant on taxpayer contributions, and is instead funded by a combination of tuition charges, gifts, and in some cases the...
located in the small village of Bradfield
Bradfield, Berkshire
Bradfield is a small village and civil parish in Berkshire, England. The parish also includes the now rather larger village of Bradfield Southend, and the hamlet of Tutts Clump....
in the English
England
England is a country that is part of the United Kingdom. It shares land borders with Scotland to the north and Wales to the west; the Irish Sea is to the north west, the Celtic Sea to the south west, with the North Sea to the east and the English Channel to the south separating it from continental...
county of Berkshire
Berkshire
Berkshire is a historic county in the South of England. It is also often referred to as the Royal County of Berkshire because of the presence of the royal residence of Windsor Castle in the county; this usage, which dates to the 19th century at least, was recognised by the Queen in 1957, and...
.

The college was founded in 1850 by Thomas Stevens, Rector and Lord of the Manor of Bradfield. It has around 480 male and 240 female pupils.

According to the Good Schools Guide, the "Pastoral, extra-curricular and academic aspects [are] all strong in a very beautiful setting. The school is unusually family-friendly and with exceptional boarding."

The school, which admits pupils between the ages of 13–18, has been fully co-educational since September 2005. All first years pupils (Fourth Formers) enter a first year boarding house (Faulkner's) and then, from the second year (known as the Shell), they move to their main boarding houses for the remaining four years.

Bradfield is renowned for its Greek theatre and Greek play, which is performed on a three-year rota. Started to save the school from bankruptcy by Head Master, Dr Herbert Branston Gray, the Greek plays have been staged by the school for almost 150 years. The students who act in it receive no formal training in speaking Ancient Greek
Ancient Greek
Ancient Greek is the stage of the Greek language in the periods spanning the times c. 9th–6th centuries BC, , c. 5th–4th centuries BC , and the c. 3rd century BC – 6th century AD of ancient Greece and the ancient world; being predated in the 2nd millennium BC by Mycenaean Greek...
, and have only nine months to learn the lines and direction, as well as keeping up with their other studies. The theatre opened in 1890 with a performance of Antigone. The 2006 play was Euripides’s
Euripides
Euripides was one of the three great tragedians of classical Athens, the other two being Aeschylus and Sophocles. Some ancient scholars attributed ninety-five plays to him but according to the Suda it was ninety-two at most...
Medea
Medea
Medea is a woman in Greek mythology. She was the daughter of King Aeëtes of Colchis, niece of Circe, granddaughter of the sun god Helios, and later wife to the hero Jason, with whom she had two children, Mermeros and Pheres. In Euripides's play Medea, Jason leaves Medea when Creon, king of...
, directed by John Taylor. It has been noted for its groundbreaking advances, including the addition of projected subtitles and the bold decision of incorporating the orchestra into the skênê, using a ramp covered in sand and flooded to symbolise the sea and Medea's situation of being "between places".

The Greek Theatre is closed until further notice to allow restoration and repair work, enabling the theatre to meet modern health and safety requirements. The College has decided not to rebuild the Victorian temple which stands in the middle of the performing area. This is because such "temples" are not true to the design of ancient Greek amphitheatres. The smaller skene will create much needed space, making the performance of the plays easier and enabling the theatre to be used for other drama including Shakespeare. The 2009 Greek play, which was performed in the College's recently refurbished Big School theatre at the end of June and beginning of July, was Oedipus by Sophocles.

Simon Henderson is Headmaster in succession to Peter Roberts, appointed by Council from September 2011. Simon was formerly Deputy Head (Academic) at Sherborne School
Sherborne School
Sherborne School is a British independent school for boys, located in the town of Sherborne in north-west Dorset, England. It is one of the original member schools of the Headmasters' and Headmistresses' Conference....
, prior to which he held the position of Head of History at Eton College
Eton College
Eton College, often referred to simply as Eton, is a British independent school for boys aged 13 to 18. It was founded in 1440 by King Henry VI as "The King's College of Our Lady of Eton besides Wyndsor"....
as well as being a Deputy Housemaster (including some years as residential deputy in the Scholars’ House). He was educated at Winchester College
Winchester College
Winchester College is an independent school for boys in the British public school tradition, situated in Winchester, Hampshire, the former capital of England. It has existed in its present location for over 600 years and claims the longest unbroken history of any school in England...
and Brasenose College, Oxford
University of Oxford
The University of Oxford is a university located in Oxford, United Kingdom. It is the second-oldest surviving university in the world and the oldest in the English-speaking world. Although its exact date of foundation is unclear, there is evidence of teaching as far back as 1096...
.

In September 2010 the Blackburn Science Centre was opened. The new building includes green elements such as a bio-mass boiler, green roof and solar panels.

The oldest building is College gateway, which incorporates part of a barn of 1382. The wrought iron was made by the village blacksmith.