Bougainville Island
Bougainville Island
Bougainville Island is the main island of the Autonomous Region of Bougainville of Papua New Guinea. This region is also known as Bougainville Province or the North Solomons. The population of the province is 175,160 , which includes the adjacent island of Buka and assorted outlying islands...
is ecologically
Ecology
Ecology is the scientific study of the relations that living organisms have with respect to each other and their natural environment. Variables of interest to ecologists include the composition, distribution, amount , number, and changing states of organisms within and among ecosystems...
and geographically
Physical geography
Physical geography is one of the two major subfields of geography. Physical geography is that branch of natural science which deals with the study of processes and patterns in the natural environment like the atmosphere, biosphere and geosphere, as opposed to the cultural or built environment, the...
, although not politically
Political geography
Political geography is the field of human geography that is concerned with the study of both the spatially uneven outcomes of political processes and the ways in which political processes are themselves affected by spatial structures...
, part of the Solomon Islands. Buka
Buka Island
Buka Island is the second largest island in the Papua New Guinean province of Bougainville.- History :Buka was first occupied by humans in paleolithic times, some 30,000 years ago...
, Bougainville, and most of the Solomons are part of the Solomon Islands rain forests
Solomon Islands rain forests
The Solomon Islands rain forests are a terrestrial ecoregion which includes most of the Solomon Islands and the islands of Bougainville and Buka, which are part of Papua New Guinea. The Santa Cruz Islands, which lie to the east of the Solomons, are part of the Vanuatu rain forests ecoregion,...
ecoregion
Ecoregion
An ecoregion , sometimes called a bioregion, is an ecologically and geographically defined area that is smaller than an ecozone and larger than an ecosystem. Ecoregions cover relatively large areas of land or water, and contain characteristic, geographically distinct assemblages of natural...
.

The island was named after the French navigator
Navigator
A navigator is the person on board a ship or aircraft responsible for its navigation. The navigator's primary responsibility is to be aware of ship or aircraft position at all times. Responsibilities include planning the journey, advising the Captain or aircraft Commander of estimated timing to...
Louis Antoine de Bougainville
Louis Antoine de Bougainville
Louis-Antoine, Comte de Bougainville was a French admiral and explorer. A contemporary of James Cook, he took part in the French and Indian War and the unsuccessful French attempt to defend Canada from Britain...
(whose name has also been lent to the creeping tropical flowering vines of the genus Bougainvillea
Bougainvillea
Bougainvillea is a genus of flowering plants native to South America from Brazil west to Peru and south to southern Argentina . Different authors accept between four and 18 species in the genus...
). In 1885 it came under German administration as part of German New Guinea
German New Guinea
German New Guinea was the first part of the German colonial empire. It was a protectorate from 1884 until 1914 when it fell to Australia following the outbreak of the First World War. It consisted of the northeastern part of New Guinea and several nearby island groups...
. Australia occupied it in 1914 and, as a League of Nations
League of Nations
The League of Nations was an intergovernmental organization founded as a result of the Paris Peace Conference that ended the First World War. It was the first permanent international organization whose principal mission was to maintain world peace...
mandatory power, administered it from 1918 until the Japanese invaded in 1942 and then again from 1945 until PNG independence
Independence
Independence is a condition of a nation, country, or state in which its residents and population, or some portion thereof, exercise self-government, and usually sovereignty, over its territory....
in 1975, as a United Nations mandatory power.

The island was occupied by Australian, American and Japanese forces in World War II. It was an important base for the RAAF, RNZAF and USAAF
United States Army Air Forces
The United States Army Air Forces was the military aviation arm of the United States of America during and immediately after World War II, and the direct predecessor of the United States Air Force....
. On 8 March 1944 during World War II
World War II
World War II, or the Second World War , was a global conflict lasting from 1939 to 1945, involving most of the world's nations—including all of the great powers—eventually forming two opposing military alliances: the Allies and the Axis...
, American forces were attacked by Japanese troops on Hill 700 on this island. The battle
Battle
Generally, a battle is a conceptual component in the hierarchy of combat in warfare between two or more armed forces, or combatants. In a battle, each combatant will seek to defeat the others, with defeat determined by the conditions of a military campaign...
lasted five days, ending with a Japanese retreat
Withdrawal (military)
A withdrawal is a type of military operation, generally meaning retreating forces back while maintaining contact with the enemy. A withdrawal may be undertaken as part of a general retreat, to consolidate forces, to occupy ground that is more easily defended, or to lead the enemy into an ambush...
.

The island is rich in copper
Copper
Copper is a chemical element with the symbol Cu and atomic number 29. It is a ductile metal with very high thermal and electrical conductivity. Pure copper is soft and malleable; an exposed surface has a reddish-orange tarnish...
and gold
Gold
Gold is a chemical element with the symbol Au and an atomic number of 79. Gold is a dense, soft, shiny, malleable and ductile metal. Pure gold has a bright yellow color and luster traditionally considered attractive, which it maintains without oxidizing in air or water. Chemically, gold is a...
. A large mine was established at Panguna
Panguna
Panguna is a town and a copper mine on Bougainville Island, Papua New Guinea. By the end of its operations on May 15, 1989 it was the largest open-cut mine in the world; it was also a major catalyst in the unrest in Bougainville in the 1970s and 1980s.- See also :* History of Bougainville*...
in the early 1970s by Bougainville Copper Limited, a subsidiary of Rio Tinto
Rio Tinto Group
The Rio Tinto Group is a diversified, British-Australian, multinational mining and resources group with headquarters in London and Melbourne. The company was founded in 1873, when a multinational consortium of investors purchased a mine complex on the Rio Tinto river, in Huelva, Spain from the...
.

Disputes over the environmental impact, financial benefits, and social change brought by the mine renewed a secessionist movement that had been dormant since the 1970s. The independence of Bougainville (Republic of North Solomons) was unsuccessfully proclaimed in 1975 and in 1990.

In 1988 the Bougainville Revolutionary Army
Bougainville Revolutionary Army
The Bougainville Revolutionary Army was formed in 1988 by Bougainvilleans seeking independence from Papua New Guinea .BRA leaders argue that Bougainville is ethnically part of the Solomon Islands and has not profited from the extensive mining that has occurred on the island...
(BRA) increased their activity significantly. Prime Minister Sir Rabbie Namaliu
Rabbie Namaliu
Sir Rabbie Langanai Namaliu, GCL, CSM, KCMG is a Papua New Guinea politician. He served as the fourth Prime Minister of Papua New Guinea from 1988 to 1992 as leader of the Pangu Party...
ordered the Papua New Guinea Defence Force (PNGDF) to put down the rebellion, and the conflict escalated into a civil war. The PNGDF retreated from permanent positions on Bougainville in 1990, but continued military action. The conflict involved pro-independence and loyalist Bougainvillean groups as well as the PNGDF. The war claimed an estimated 15,000 to 20,000 lives. In 1996 Prime Minister Sir Julius Chan
Julius Chan
Sir Julius Chan GCL GCMG KBE was Prime Minister of Papua New Guinea from 1980 to 1982 and from 1994 to 1997. He is currently Member of Parliament for New Ireland Province, having won the seat in the 2007 national election...
requested the help of Sandline International
Sandline International
Sandline International was a private military company based in London, established in the early 1990s. It was involved in conflicts in Papua New Guinea in 1997 causing the Sandline affair, in 1998 in Sierra Leone and in Liberia in 2003 Sandline International was a private military company based...
, a private military company
Private military company
A private military company or provides military and security services. These combatants are commonly known as mercenaries, though modern-day PMCs refer to their staff as security contractors, private military contractors or private security contractors, and refer to themselves as private military...
previously involved in supplying mercenaries
Mercenary
A mercenary, is a person who takes part in an armed conflict based on the promise of material compensation rather than having a direct interest in, or a legal obligation to, the conflict itself. A non-conscript professional member of a regular army is not considered to be a mercenary although he...
in the civil war in Sierra Leone
Sierra Leone
Sierra Leone , officially the Republic of Sierra Leone, is a country in West Africa. It is bordered by Guinea to the north and east, Liberia to the southeast, and the Atlantic Ocean to the west and southwest. Sierra Leone covers a total area of and has an estimated population between 5.4 and 6.4...
, to put down the rebellion. This resulted in the Sandline affair
Sandline affair
The Sandline affair was a political scandal that became one of the defining moments in the history of Papua New Guinea, and particularly that of the conflict in Bougainville. It brought down the government of Sir Julius Chan, and took Papua New Guinea to the verge of military revolt...
.

Elections for the first Autonomous Government were held in May and June 2005, Joseph Kabui
Joseph Kabui
Joseph Canisius Kabui was a secessionist leader and the first President of the Autonomous Region of Bougainville, off the coast of Papua New Guinea, from 2005 to 2008. He was also the leader of the Bougainville People's Congress....
was elected President. He died on 6 June 2008.

On 25 July 2005 rebel leader Francis Ona
Francis Ona
Francis Ona was a Bougainville secessionist leader who led an uprising against the Government of Papua New Guinea, motivated at least initially by his concerns over the operation of the Panguna mine by Bougainville Copper, a subsidiary of Rio Tinto Group...
died after a short illness. A former surveyor with Bougainville Copper Limited, Ona was a key figure in the secessionist conflict and had refused to formally join the island's peace process. 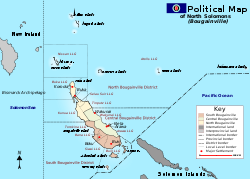 Each province in Papua New Guinea has one or more districts, and each district has one or more Local Level Government (LLG) areas. For census
Census
A census is the procedure of systematically acquiring and recording information about the members of a given population. It is a regularly occurring and official count of a particular population. The term is used mostly in connection with national population and housing censuses; other common...
purposes, the LLG areas are subdivided into wards and those into census units.