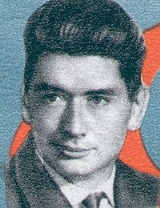 Yegorov came from a medical background, with his father a prominent heart surgeon
Cardiac surgery
Cardiovascular surgery is surgery on the heart or great vessels performed by cardiac surgeons. Frequently, it is done to treat complications of ischemic heart disease , correct congenital heart disease, or treat valvular heart disease from various causes including endocarditis, rheumatic heart...
, and his mother an ophthalmologist
Ophthalmology
Ophthalmology is the branch of medicine that deals with the anatomy, physiology and diseases of the eye. An ophthalmologist is a specialist in medical and surgical eye problems...
. He also selected medicine as a career and graduated from the "First Moscow Medical Institute" in 1961. During the course of his studies, he came into contact with Yuri Gagarin
Yuri Gagarin
Yuri Alekseyevich Gagarin was a Soviet pilot and cosmonaut. He was the first human to journey into outer space, when his Vostok spacecraft completed an orbit of the Earth on April 12, 1961....
's training and became interested in space medicine
Space medicine
Space medicine is the practice of medicine on astronauts in outer space whereas astronautical hygiene is the application of science and technology to the prevention or control of exposure to the hazards that may cause astronaut ill health. Both these sciences work together to ensure that...
.

Yegorov was selected as a member of the multi-disciplinary team that flew on Voskhod 1
Voskhod 1
Voskhod 1 was the seventh manned Soviet space flight. It achieved a number of "firsts" in the history of manned spaceflight, being the first space flight to carry more than one crewman into orbit, the first flight without the use of spacesuits, and the first to carry either an engineer or a...
. It has been suggested that his father's influence within the Politburo
Politburo
Politburo , literally "Political Bureau [of the Central Committee]," is the executive committee for a number of communist political parties.-Marxist-Leninist states:...
may have had some bearing on the selection. As a result of this space flight, Yegorov was awarded the title of the Hero of the Soviet Union
Hero of the Soviet Union
The title Hero of the Soviet Union was the highest distinction in the Soviet Union, awarded personally or collectively for heroic feats in service to the Soviet state and society.-Overview:...
on October 19, 1964.

Yegorov earned his doctorate in medicine, with his specialisation being in disorders of the sense of balance.

Yegorov was married three times and fathered three children. He died from a heart attack in 1994. The asteroid
Asteroid
Asteroids are a class of small Solar System bodies in orbit around the Sun. They have also been called planetoids, especially the larger ones...
8450 Yegorov is named in his honor.