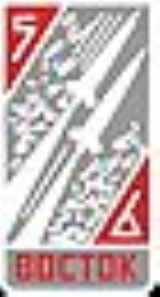 Encyclopedia
Voskhod 1 was the seventh manned Soviet
Soviet Union
The Soviet Union , officially the Union of Soviet Socialist Republics , was a constitutionally socialist state that existed in Eurasia between 1922 and 1991....
space flight. It achieved a number of "firsts" in the history of manned spaceflight
Human spaceflight
Human spaceflight is spaceflight with humans on the spacecraft. When a spacecraft is manned, it can be piloted directly, as opposed to machine or robotic space probes and remotely-controlled satellites....
, being the first space flight to carry more than one crewman into orbit, the first flight without the use of spacesuits, and the first to carry either an engineer or a physician into outer space. It also set a manned spacecraft altitude record of 336 km (208.8 mi).

The three spacesuits for the Voskhod 1 cosmonauts were omitted; there was neither the room nor the payload capacity for the Voskhod to carry them. The original Voskhod had been designed to carry two cosmonauts, but Soviet politicians pushed the Soviet space program into squeezing three cosmonauts into Voskhod 1. The only other space flight in the short Voskhod program, Voskhod 2
Voskhod 2
Voskhod 2 was a Soviet manned space mission in March 1965. Vostok-based Voskhod 3KD spacecraft with two crew members on board, Pavel Belyaev and Alexei Leonov, was equipped with an inflatable airlock...
, carried two suited cosmonauts — of necessity, because it was the flight on which Alexei Leonov made the world's first walk in space.

As part of its payload Voskhod 1 carried a ribbon off a Communard
Communards
The Communards were members and supporters of the short-lived 1871 Paris Commune formed in the wake of the Franco-Prussian War and France's defeat....
banner from the Paris Commune
Paris Commune
The Paris Commune was a government that briefly ruled Paris from March 18 to May 28, 1871. It existed before the split between anarchists and Marxists had taken place, and it is hailed by both groups as the first assumption of power by the working class during the Industrial Revolution...
of 1871 into orbit .

The original prime crew of cosmonauts for Voskhod 1, composed of Boris Volynov
Boris Volynov
Boris Valentinovich Volynov is a Soviet cosmonaut who flew two space missions of the Soyuz programme: Soyuz 5, and Soyuz 21. He was the first Jewish cosmonaut.-Biography:...
, Georgi Katys, and Boris Yegorov
Boris Yegorov
Boris Borisovich Yegorov was a Soviet physician-cosmonaut and he became the first physician to make a space flight.Yegorov came from a medical background, with his father a prominent heart surgeon, and his mother an ophthalmologist. He also selected medicine as a career and graduated from the...
, was rejected just three days before the scheduled launch date for the space capsule
Spacecraft
A spacecraft or spaceship is a craft or machine designed for spaceflight. Spacecraft are used for a variety of purposes, including communications, earth observation, meteorology, navigation, planetary exploration and transportation of humans and cargo....
, reportedly due to the State Commission's discovery that Volynov's mother was Jewish.

Politics played a role in the crew's selection. Beyond Volynov's Jewish mother, Katys' father had been arrested (like Chief Designer Sergey Korolyov
Sergey Korolyov
Sergei Pavlovich Korolev ; died 14 January 1966 in Moscow, Russia) was the lead Soviet rocket engineer and spacecraft designer in the Space Race between the United States and the Soviet Union during the 1950s and 1960s...
) and shot during the Great Purge
Great Purge
The Great Purge was a series of campaigns of political repression and persecution in the Soviet Union orchestrated by Joseph Stalin from 1936 to 1938...
. Various factions each supported their own representatives for the flight. Korolyov wanted his engineers to become cosmonauts, believing that spacecraft designers should fly in their own vehicles. The Soviet Air Force
Soviet Air Force
The Soviet Air Force, officially known in Russian as Военно-воздушные силы or Voenno-Vozdushnye Sily and often abbreviated VVS was the official designation of one of the air forces of the Soviet Union. The other was the Soviet Air Defence Forces...
agreed to a crew composed of a military pilot, an engineer or scientist, and a doctor, but advocated for an all-military crew. Konstantin Feoktistov
Konstantin Feoktistov
Konstantin Petrovich Feoktistov was a Soviet cosmonaut and an eminent space engineer. Feoktistov also wrote several books on space technology and exploration...
, who had been a design engineer for the Vostok
Vostok programme
The Vostok programme was a Soviet human spaceflight project that succeeded in putting a person into Earth's orbit for the first time. The programme developed the Vostok spacecraft from the Zenit spy satellite project and adapted the Vostok rocket from an existing ICBM design...
, Voskhod
Voskhod programme
The Voskhod programme was the second Soviet human spaceflight project. Two manned missions were flown using the Voskhod spacecraft and rocket, one in 1964 and one in 1965....
, and Soyuz
Soyuz programme
The Soyuz programme is a human spaceflight programme that was initiated by the Soviet Union in the early 1960s, originally part of a Moon landing project intended to put a Soviet cosmonaut on the Moon...
programs, was selected for this flight, becoming the only Soviet outer space designer to make a spaceflight. Yegorov, a medical doctor, used his political influence to get selected for the crew through his father's Politburo
Politburo
Politburo , literally "Political Bureau [of the Central Committee]," is the executive committee for a number of communist political parties.-Marxist-Leninist states:...
connections. The Soviet space program viewed its crews as passengers more than pilots; the new cosmonauts received only three to four months of training, perhaps the briefest in space history other than that received by the American politicians Jake Garn
Jake Garn
Edwin Jacob "Jake" Garn is an American politician, a member of the Republican Party, and served as a U.S. Senator representing Utah from 1974 to 1993...
and Bill Nelson
Bill Nelson
Clarence William "Bill" Nelson is the senior United States Senator from the state of Florida and a member of the Democratic Party. He is a former U.S. Representative and former Treasurer and Insurance Commissioner of Florida...
for Space Shuttle flights in the 1980s. 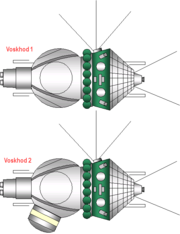 The Voskhod spacecraft
Voskhod spacecraft
The Voskhod was a spacecraft built by the Soviet Union's space program for human spaceflight as part of the Voskhod programme. It was a development of and a follow-on to the Vostok spacecraft...
were basically Vostok spacecraft
Vostok spacecraft
The Vostok was a type of spacecraft built by the Soviet Union. The first human spaceflight in history was accomplished on this spacecraft on April 12, 1961, by Soviet cosmonaut Yuri Gagarin....
with a backup, solid-fuel retro-rocket added onto the top of the descent module. The ejection seat was removed and three crew couches were added to the interior at a 90-degree angle to that of the Vostok cosmonaut's position. There was no provision for escape for the crewmen in the event of a launch or landing emergency. A solid-fuel braking rocket was also added to the space capsule's parachute lines to provide for a softer landing at touchdown. This was necessary because, unlike the Vostok space capsule, no ejection seats were fitted in the Voskhod; the cosmonauts had to land inside the Voskhod descent module.

Much of the mission of Voskhod 1 was devoted to biomedical research, and to the study of how a multi-disciplinary team could work together in space. The mission was short, at only slightly over 24 hours. Incidentally, the Soviet Premier Nikita Khrushchev
Nikita Khrushchev
Nikita Sergeyevich Khrushchev led the Soviet Union during part of the Cold War. He served as First Secretary of the Communist Party of the Soviet Union from 1953 to 1964, and as Chairman of the Council of Ministers, or Premier, from 1958 to 1964...
was removed from power during the spaceflight, and it has been speculated that this led to the mission being cut short. However, the cramped conditions of the Voskhod space capsule has also been suggested as a factor ruling out a longer-duration spaceflight.

Happening as it did before the beginning of the Project Gemini two-man flights, Voskhod 1 had a significant, but temporary, international impact. The NASA
NASA
The National Aeronautics and Space Administration is the agency of the United States government that is responsible for the nation's civilian space program and for aeronautics and aerospace research...
Administrator, James E. Webb
James E. Webb
James Edwin Webb was an American government official who served as the second administrator of NASA from February 14, 1961 to October 7, 1968....
, called the flight of Voskhod 1 a "significant space accomplishment" adding that it was "a clear indication that the Russians are continuing a large space program for the achievement of national power and prestige."