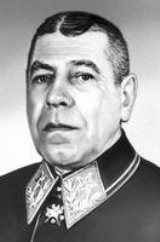 Encyclopedia
Boris Mikhailovitch Shaposhnikov ( — March 26, 1945) was a Soviet
Soviet Union
The Soviet Union , officially the Union of Soviet Socialist Republics , was a constitutionally socialist state that existed in Eurasia between 1922 and 1991....
military commander.

Shaposhnikov was born at Zlatoust
Zlatoust
Zlatoust is a city in Chelyabinsk Oblast, Russia, located on the Ay River , west of Chelyabinsk. Population: 181,000 ; 161,000 ; 99,000 ; 48,000 ; 21,000 ....
, near Chelyabinsk
Chelyabinsk
Chelyabinsk is a city and the administrative center of Chelyabinsk Oblast, Russia, located in the northwestern side of the oblast, south of Yekaterinburg, just to the east of the Ural Mountains, on the Miass River. Population: -History:...
in the Urals
Ural Mountains
The Ural Mountains , or simply the Urals, are a mountain range that runs approximately from north to south through western Russia, from the coast of the Arctic Ocean to the Ural River and northwestern Kazakhstan. Their eastern side is usually considered the natural boundary between Europe and Asia...
. He joined the army of the Russian Empire
Russian Empire
The Russian Empire was a state that existed from 1721 until the Russian Revolution of 1917. It was the successor to the Tsardom of Russia and the predecessor of the Soviet Union...
in 1901 and graduated from the Nicholas General Staff Academy
General Staff Academy (Imperial Russia)
The General Staff Academy was a Russian military academy, established in 1832 in St.Petersburg. It was first known as the Imperial Military Academy , then in 1855 it was renamed Nicholas General Staff Academy and in 1909 - Imperial Nicholas Military Academy The General Staff Academy was a...
in 1910, reaching the rank of colonel in the Caucasus Grenadiers division during World War I
World War I
World War I , which was predominantly called the World War or the Great War from its occurrence until 1939, and the First World War or World War I thereafter, was a major war centred in Europe that began on 28 July 1914 and lasted until 11 November 1918...
. In 1917, unusually for an officer of his rank, he supported the Russian Revolution
Russian Revolution of 1917
The Russian Revolution is the collective term for a series of revolutions in Russia in 1917, which destroyed the Tsarist autocracy and led to the creation of the Soviet Union. The Tsar was deposed and replaced by a provisional government in the first revolution of February 1917...
and in 1918 joined the Red Army
Red Army
The Workers' and Peasants' Red Army started out as the Soviet Union's revolutionary communist combat groups during the Russian Civil War of 1918-1922. It grew into the national army of the Soviet Union. By the 1930s the Red Army was among the largest armies in history.The "Red Army" name refers to...
.

Shaposhnikov was one of the few Red Army commanders with formal military training, and in 1921 he joined the Army's General Staff, where he served until 1925, when he was appointed commander of the Leningrad
Saint Petersburg
Saint Petersburg is a city and a federal subject of Russia located on the Neva River at the head of the Gulf of Finland on the Baltic Sea...
military region. From 1928 to 1932 he commanded the Moscow
Moscow
Moscow is the capital, the most populous city, and the most populous federal subject of Russia. The city is a major political, economic, cultural, scientific, religious, financial, educational, and transportation centre of Russia and the continent...
military region, then the Privolzhsk
Privolzhsk
Privolzhsk is a town and the administrative center of Privolzhsky District of Ivanovo Oblast, Russia, located on the Shacha River northeast of Ivanovo. Population:...
military region. In 1932 he was appointed commandant of the Red Army's Frunze Military Academy, then in 1935 returned to the command of the Leningrad region. In 1937 he was appointed Chief of the General Staff, in succession to Alexander Ilyich Yegorov, a victim of Stalin's
Joseph Stalin
Joseph Vissarionovich Stalin was the Premier of the Soviet Union from 6 May 1941 to 5 March 1953. He was among the Bolshevik revolutionaries who brought about the October Revolution and had held the position of first General Secretary of the Communist Party of the Soviet Union's Central Committee...
Great Purge
Great Purge
The Great Purge was a series of campaigns of political repression and persecution in the Soviet Union orchestrated by Joseph Stalin from 1936 to 1938...
of the Red Army. In 1940 he was appointed a Marshal of the Soviet Union
Marshal of the Soviet Union
Marshal of the Soviet Union was the de facto highest military rank of the Soviet Union. ....
.

Despite his background as a Tsarist officer, Shaposhnikov won the respect and trust of Stalin. Ironically his status as a professional officer—he did not join the Communist Party
Communist Party of the Soviet Union
The Communist Party of the Soviet Union was the only legal, ruling political party in the Soviet Union and one of the largest communist organizations in the world...
until 1930—may have helped him avoid Stalin's suspicions. The price he paid for his survival during the purges was collaboration in the destruction of Tukhachevsky and many other colleagues. Stalin's admiration was shown by the fact that he always kept a copy of Shaposhnikov's most important work, Mozg Armii
Mozg Armii
Mozg Armii , in English The Brain of the Army, is a three-volume military theory book published between 1927 and 1929. It is the most important work of Boris Shaposhnikov, a Soviet military commander then in command of the Moscow military region...
(Мозг армии, "The Brain of the Army") (1929), on his desk.

Fortunately for the Soviet Union, Shaposhnikov had a fine military mind and high administrative skills. He combined these talents with his position in Stalin's confidence to rebuild the Red Army leadership after the purges. Mozg Armii was for decades required reading for every Soviet officer. In 1939 Stalin accepted Shaposhnikov's plan for a rapid build up of the Red Army's strength. Although the plan was not completed before the German invasion
Operation Barbarossa
Operation Barbarossa was the code name for Germany's invasion of the Soviet Union during World War II that began on 22 June 1941. Over 4.5 million troops of the Axis powers invaded the USSR along a front., the largest invasion in the history of warfare...
of June 1941, it was sufficiently advanced to save the Soviet Union from complete disaster.

Shaposhnikov planned the invasion of Finland in 1940, but the commander Kliment Voroshilov
Kliment Voroshilov
Kliment Yefremovich Voroshilov , popularly known as Klim Voroshilov was a Soviet military officer, politician, and statesman...
thought the plan was too pessimistic and chose to ignore it. The Winter War
Winter War
The Winter War was a military conflict between the Soviet Union and Finland. It began with a Soviet offensive on 30 November 1939 – three months after the start of World War II and the Soviet invasion of Poland – and ended on 13 March 1940 with the Moscow Peace Treaty...
did not become the success the Soviet side had hoped, and Shaposhnikov resigned as Chief of the General Staff in August 1940, officially due to ill-health. At the time of the German invasion, he was reinstated as Chief of the General Staff (until November 1942) and also became Deputy People's Commissar for Defence, the post he held until his career was cut short by ill-health in 1943. He held the position of commandant of the Voroshilov Military Academy until his death in 1945.