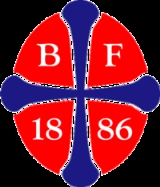 Encyclopedia
Boldklubben Frem is a Danish sports club
Sports club
A sports club or sport club, sometimes athletics club or sports association is a club for the purpose of playing one or more sports...
based in the Valby
Valby
' is one of the 10 official districts of Copenhagen, Denmark. Located in the southwestern corner of Copenhagen Municipality, it is a heterogeneous mixture of different types of housing - including apartment blocks, terraced housing, areas with single-family houses and allotments, as well as remains...
-Sydhavnen area of Copenhagen
Copenhagen
Copenhagen is the capital and largest city of Denmark, with an urban population of 1,199,224 and a metropolitan population of 1,930,260 . With the completion of the transnational Øresund Bridge in 2000, Copenhagen has become the centre of the increasingly integrating Øresund Region...
. It is best known for its semi-professional
Semi-professional
A semi-professional athlete is one who is paid to play and thus is not an amateur, but for whom sport is not a full-time occupation, generally because the level of pay is too low to make a reasonable living based solely upon that source, thus making the athlete not a full professional...
football
Football (soccer)
Association football, more commonly known as football or soccer, is a sport played between two teams of eleven players with a spherical ball...
team
Team
A team comprises a group of people or animals linked in a common purpose. Teams are especially appropriate for conducting tasks that are high in complexity and have many interdependent subtasks.A group in itself does not necessarily constitute a team...
. Since its foundation in 1886, Frem has won the Danish Championships six times and the Danish Cup
Danish Cup
The Danish Cup is the official "knockout" cup competition in Danish football, run by the Danish Football Association. The cup has been contested annually since 1955...
twice. Until the disastrous bankruptcy
Bankruptcy
Bankruptcy is a legal status of an insolvent person or an organisation, that is, one that cannot repay the debts owed to creditors. In most jurisdictions bankruptcy is imposed by a court order, often initiated by the debtor....
in 1993, Frem had played in the top division all but six seasons. After the bankruptcy the club fought its way back to the top of Danish football, but in 2010 it went bankrupt again and was demoted to the Copenhagen Series - the fifth tier in the Danish league system. Today they participate in the Denmark Series
Denmark Series
The Denmark Series is the 4th tier of football in Denmark. Teams are divided into three pools of fourteen teams each. The top two teams in each pool are promoted to the Danish 2nd Division West or Danish 2nd Division East, as is appropriate for each club geographically...
.

The club also has a youth and amateur football branch, as well as a cricket
Cricket
Cricket is a bat-and-ball game played between two teams of 11 players on an oval-shaped field, at the centre of which is a rectangular 22-yard long pitch. One team bats, trying to score as many runs as possible while the other team bowls and fields, trying to dismiss the batsmen and thus limit the...
team. It is also involved in the running of the KIES sports boarding school.
. 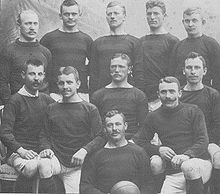 BK Frem were founded as Fremskridtsklubbens Cricketklub on 17 July 1886 by a group of seditious young men from the then government
Jacob Brønnum Scavenius Estrup
Jacob Brønnum Scavenius Estrup, , was a Danish politician, member of the Højre party. He was Interior Minister from 1865 to 1869 in the Cabinet of Frijs and Council President as well as Finance Minister from 1875 to 1894 as the leader of the Cabinet of Estrup.-Biography:Estrup was son of the...
hostile Venstre Reform Party
Venstre (Denmark)
VenstreThe party name is officially not translated into any other language, but is in English often referred to as the Liberal Party. Similar rules apply for the name of the party's youth wing Venstres Ungdom. , full name Venstre, Danmarks Liberale Parti , is the largest political party in Denmark...
, as a cloak for political activities. In 1887 football was introduced and the name was changed to Boldklubben Frem, stiftet af Fremskridtsklubben (lit. Danish: The Ball Club Forward, founded by the Progress Club).

In the first two years of the life of the club, only two sports matches were played, but when the Danish Football Association
Danish Football Association
The Danish Football Association is the governing body of football in Denmark. It is the organization of the Danish football clubs and runs the professional Danish football leagues and the men's and women's national teams. It is based in the city of Brøndby and is a founding member of both FIFA...
introduced a football tournament in 1889, the club was invited to participate, and in 1890 Frem became the first Danish club to beat KB
Kjøbenhavns Boldklub
Kjøbenhavns Boldklub or KB is a Danish sports club based in Copenhagen. The club was founded April 26, 1876 on the grassy fields in outer Copenhagen which later became Fælledparken. Football and cricket has been played in KB since 1879, making KB the oldest football club on Continental Europe and...
in a football match. In 1902 Frem became unofficial Danish champions when they won the league played under the auspices of the Danish FA. This was the first ever senior title won by the club.

In 1905, the club moved to its own field at Enghavevej, Vesterbro, obtaining its distinct working class profile. To this day, both the Social Democrats and the Union of Metalworkers
Danish Union of Metalworkers
The Danish Union of Metalworkers is a trade union in Denmark. It is an affiliate of the Danish Confederation of Trade Unions, the European Metalworkers' Federation and the International Metalworkers' Federation....
holds Frem sponsorships. In 1912, Frem joined the representative team Stævnet
Stævnet
Stævnet or Copenhagen XI were a Danish association football representative team which had its prime before 1970, however it was active until 1994. Stævnet participated in the Inter-Cities Fairs Cup, the precursor of today's UEFA Cup, in 1955-58, 1958-60, 1961-62, 1962-63 and 1963-64.The Copenhagen...
which arranged lucrative exhibition matches and played a decisive role in Danish football politics.

Since 1983 Frem had been battling economically, and in 1993 saw themselves demoted to the Danmarksserien following a bankruptcy, which was due to a debt
Debt
A debt is an obligation owed by one party to a second party, the creditor; usually this refers to assets granted by the creditor to the debtor, but the term can also be used metaphorically to cover moral obligations and other interactions not based on economic value.A debt is created when a...
of DKK
Danish krone
The krone is the official currency of the Kingdom of Denmark consisting of Denmark, the Faroe Islands and Greenland. It is subdivided into 100 øre...
8,500,000 and allegations of fraud
Fraud
In criminal law, a fraud is an intentional deception made for personal gain or to damage another individual; the related adjective is fraudulent. The specific legal definition varies by legal jurisdiction. Fraud is a crime, and also a civil law violation...
.

In 2010 after years of uncertain economy the club once again went beankrupt and was demoted to the Copenhagen Series. 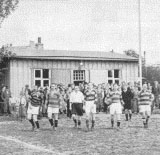 In the early years, Frem were located on Østerbro
Østerbro
Østerbro is one of the 10 official districts of Copenhagen, Denmark. It is located just north of the city centre, outside the old city gate Østerport which, after it was moved around 1700, used to be located close to present-day Østerport Station...
in Copenhagen
Copenhagen
Copenhagen is the capital and largest city of Denmark, with an urban population of 1,199,224 and a metropolitan population of 1,930,260 . With the completion of the transnational Øresund Bridge in 2000, Copenhagen has become the centre of the increasingly integrating Øresund Region...
, playing its matches at Blegdamsfælleden
Fælledparken
The park Fælledparken in Copenhagen, Denmark, was created 1906–1914 by landscape architect Edvard Glæsel in cooperation with the Copenhagen Municipality on the commons previously named Nørrefælled and Østerfælled....
, alongside its main rivals in the early years; AB
Akademisk Boldklub
Akademisk Boldklub or AB is a Danish professional football club from Copenhagen,currently playing at the second highest level in Danish domestic football, the 1st Division.-History:...
and KB
Kjøbenhavns Boldklub
Kjøbenhavns Boldklub or KB is a Danish sports club based in Copenhagen. The club was founded April 26, 1876 on the grassy fields in outer Copenhagen which later became Fælledparken. Football and cricket has been played in KB since 1879, making KB the oldest football club on Continental Europe and...
. In 1905 Frem moved to its own field at Enghavevej, Vesterbro. Being a field-owning club gave Frem the advantage of entry fees. Its location however lead to some muttering from football fans who found it to be too far out of town.

In 1942, Frem moved to Valby Idrætspark
Valby Idrætspark
Valby Idrætspark is a multi-purpose stadium in the district of Valby, in Copenhagen, Denmark. It is currently used mostly for football matches and is the home stadium of Boldklubben Frem. Valby Idrætspark has hosted a total of nine Danish FA-recognized internationals.In 2006 the Copenhagen...
, where the current main stand was erected in 1965. Throughout the years a lot of matches has been played at Idrætsparken
Idrætsparken
Københavns Idrætspark, in daily use Idrætsparken, also known as Parken, was a multi-purpose stadium in Copenhagen, Denmark. It was initially used as the stadium of Denmark national football team and Kjøbenhavns Boldklub. It was replaced by the Parken Stadium in 1992. The capacity of the stadium was...
. It is unclear when this tradition was discontinued. 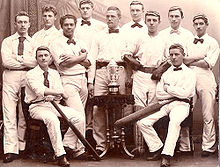 Assistant Coaches: Tim Ilsø
Tim Ilsø
Tim Ilsø is a Danish semi-professional football player who currently plays for Boldklubben Frem in the 1. Division. Ilsø has made more than 200 first-team appearances for Frem, first as a forward, later as a midfielder or full back....
, Martin Jeppesen
Martin Jeppesen
Martin Jeppesen or just Jeppe is a Danish football player who has spent the majority of his career with Boldklubben Frem.Jeppesens father Jørn Jeppesen made around 260 first-team appearances for Frem, scoring 99 goals...