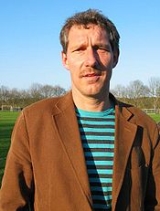 Encyclopedia
Kim Vilfort is a former Danish
Denmark
Denmark is a Scandinavian country in Northern Europe. The countries of Denmark and Greenland, as well as the Faroe Islands, constitute the Kingdom of Denmark . It is the southernmost of the Nordic countries, southwest of Sweden and south of Norway, and bordered to the south by Germany. Denmark...
professional football (soccer)
Football (soccer)
Association football, more commonly known as football or soccer, is a sport played between two teams of eleven players with a spherical ball...
player who is now head talent scout at the Danish football club Brøndby IF
Brøndby IF
Brøndby IF is a Danish professional football club based in Brøndbyvester, Brøndby, on the western outskirts of Copenhagen and is the biggest football club in Denmark with almost 2000 members. The club is also known as Brøndbyernes Idrætsforening, or Brøndby and BIF for short...
. In his playing career, Vilfort played as a midfielder
Midfielder
A midfielder is an association football position. Some midfielders play a more defensive role, while others blur the boundaries between midfielders and forwards. The number of midfielders a team uses during a match may vary, depending on the team's formation and each individual player's role...
and he was a part of the Danish national football team which won the 1992 European Championships (Euro 92) tournament, following Vilfort's goal for the 2–0 result in the final game. In all, he represented the Danish national team in 77 matches and scored 14 goals.

He played most of his active career at Brøndby IF, winning seven Danish championships
Danish football champions
The Danish football champions are the winners of the highest league of football in Denmark. The title has been contested since 1913, in a varying form of competitions. Since 1991, the winners have been found through the Danish Superliga championship...
in his twelve years with the club. He is the combined top scorer of the club with 110 goals in 470 matches, and the Brøndby fans have nicknamed the stadium of the club, Brøndby Stadium
Brøndby Stadium
Brøndby Stadium is the homeground of football club Brøndby IF, situated in the Greater Copenhagen area. It is referred to as Vilfort Park among Brøndby supporters, named after club legend Kim Vilfort.-History:...
, as Vilfort Park.

Vilfort started playing football as a boy in Skovlunde IF and in those early years he generally played the position of striker
Striker
Forwards, also known as strikers, are the players on a team in association football who play nearest to the opposing team's goal, and are therefore principally responsible for scoring goals...
. Vilfort moved to BK Frem
Boldklubben Frem
Boldklubben Frem is a Danish sports club based in the Valby-Sydhavnen area of Copenhagen. It is best known for its semi-professional football team. Since its foundation in 1886, Frem has won the Danish Championships six times and the Danish Cup twice...
in 1981, where he got his national team debut on October 5, 1983 in a 0–1 defeat to Poland
Poland national football team
The Poland national football team represents Poland in association football and is controlled by the Polish Football Association, the governing body for football in Poland...
in an Olympic Games
Olympic Games
The Olympic Games is a major international event featuring summer and winter sports, in which thousands of athletes participate in a variety of competitions. The Olympic Games have come to be regarded as the world’s foremost sports competition where more than 200 nations participate...
qualifier. In 1985 he moved to the French
France
The French Republic , The French Republic , The French Republic , (commonly known as France , is a unitary semi-presidential republic in Western Europe with several overseas territories and islands located on other continents and in the Indian, Pacific, and Atlantic oceans. Metropolitan France...
club Lille OSC
Lille OSC
LOSC Lille Métropole is a French association football club based in Lille. The club was founded in 1944 as a result of a merger and currently play in Ligue 1, the first division of French football. Lille plays its home matches at the Stade Lille-Metropole in nearby Villeneuve-d'Ascq. In 2012, the...
. In 1986 Vilfort returned to Denmark to play as an attacking midfielder for the defending Danish national champions Brøndby IF, and here he would play out the rest of his career.

Vilfort arrived at Brøndby for the first participation in the European competitions for the club, namely the 1986 European Cup
UEFA Champions League
The UEFA Champions League, known simply the Champions League and originally known as the European Champion Clubs' Cup or European Cup, is an annual international club football competition organised by the Union of European Football Associations since 1955 for the top football clubs in Europe. It...
. Vilfort scored two goals in four games before Brøndby was eliminated in the 2nd round. The height of his European club career came in the 1991 UEFA Cup
UEFA Cup
The UEFA Europa League is an annual association football cup competition organised by UEFA since 1971 for eligible European football clubs. It is the second most prestigious European club football contest after the UEFA Champions League...
, where Brøndby advanced to the semi-final, before being eliminated in an aggregate loss to AS Roma. Vilfort was subsequently awarded as both Brøndby IF's 1991 Player of the Year as well as the 1991 Danish Player of the Year
Danish Player of the Year
The Danish Player of the Year award is an annual prize, which has been given to the best Danish football player by the Danish Football Player Association since 1963. The winner is decided in a vote amongst the professional Danish footballers....
. In all he would play 55 European games and score 9 goals during his time at Brøndby.

After Denmark missed the qualification for the 1994 FIFA World Cup
1994 FIFA World Cup
The 1994 FIFA World Cup, the 15th staging of the FIFA World Cup, was held in nine cities across the United States from June 17 to July 17, 1994. The United States was chosen as the host by FIFA on July 4, 1988...
, Vilfort once again represented Denmark in the Euro 96
1996 UEFA European Football Championship
The 1996 UEFA European Football Championship was hosted by England, who won the right to host the tournament ahead of bids from Austria, Portugal and the Netherlands. It was the tenth European Football Championship, which is held every four years and endorsed by UEFA. It was the first to use the...
. Following Denmark's 0–3 loss to Croatia
Croatia national football team
The Croatia national football team represents Croatia in international football. The team is controlled by the Croatian Football Federation, the governing body for football in the country, and has been managed since 2006 by former player Slaven Bilić...
, on June 16, 1996, the team was eliminated from the preliminary group stage of Euro 96. Subsequently, Vilfort ended his career for the national team at age 33 to concentrate on his club career at Brøndby.

Vilfort played another two years for Brøndby, winning a further two Danish championships. His contract expired on June 1, 1998, after the last game of the 1997–98 season
Danish Superliga 1997-98
The 1997-98 Danish Superliga season was the 8th season of the Danish Superliga league championship, governed by the Danish Football Association. It took place from the first match on July 25, 1997 to final match on June 1, 1998....
. Vilfort scored the winning goal, a flying header, in a 1–0 victory over Odense BK
Odense BK
Odense Boldklub is a Danish professional football club based in the town of Odense. The club has won three Danish championships and five Danish Cup trophies. OB play in the Danish Superliga and their home field is TRE-FOR Park in Odense on Funen...
to end his Brøndby career. With 470 matches, Vilfort ended his career as the player with the second-most games in Brøndby history, following Bjarne Jensen
Bjarne Jensen
Bjarne Jensen is a retired Danish football player, who played the majority of his career in Brøndby IF.He has played four games for the Danish national football team, but never scored any goals....
's 556 games. Vilfort has since been overtaken by Per Nielsen
Per Nielsen
Per Lundgren Nielsen is a retired Danish professional football player who played in the central defense of Brøndby IF in the Danish Superliga for his entire club career. With Brøndby, Nielsen won five Danish championships and three Danish Cups since his senior debut in 1993...
. His 78 league goals is second only to Bent "Turbo" Christensen
Bent Christensen (1967)
Bent Christensen Arensøe, formerly known as Bent René Christensen, is a Danish former professional football player who has been part of the coaching team at Brøndby IF since 2005....
, though Vilfort has a higher combined goalscoring tally with 110 goals in all competitions, both domestic and European.

Following his retirement, Vilfort became the head of the Brøndby IF youth system, where his son Mikkel plays.