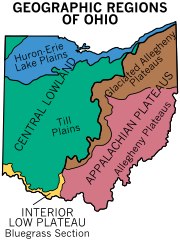 The Bluegrass Region is a geographic region in the state of Kentucky
Kentucky
The Commonwealth of Kentucky is a state located in the East Central United States of America. As classified by the United States Census Bureau, Kentucky is a Southern state, more specifically in the East South Central region. Kentucky is one of four U.S. states constituted as a commonwealth...
, United States
United States
The United States of America is a federal constitutional republic comprising fifty states and a federal district...
. It occupies the northern part of the state and since European settlement has contained a majority of the state's population and its largest cities.
Pre European settlement the region was mostly a savannah
Savannah
Savannah or savanna is a type of grassland.It can also mean:-People:* Savannah King, a Canadian freestyle swimmer* Savannah Outen, a singer who gained popularity on You Tube...
with wide grasslands with enormous oak trees periodically placed. It contained large herds of bison
Bison
Members of the genus Bison are large, even-toed ungulates within the subfamily Bovinae. Two extant and four extinct species are recognized...
and other wildlife, especially near salt licks. The name "Kentucky" itself means "meadow lands" in several different Indian languages and was specifically applied to this region, only becoming a name for the entire state much later. Europeans named the Bluegrass Region for the blue flowered Poa
Poa
Poa is a genus of about 500 species of grasses, native to the temperate regions of both hemispheres. Common names include meadow-grass , bluegrass , tussock , and speargrass. "Poa" is Greek for fodder...
grass that grew there.

By 1800 farms began noticing that horses who grazed in the Bluegrass region were more durable than those from other regions - this is due to the high content of calcium in the soil. Within decades the herds of bison would be wiped out and replaced with numerous thoroughbred
Thoroughbred
The Thoroughbred is a horse breed best known for its use in horse racing. Although the word thoroughbred is sometimes used to refer to any breed of purebred horse, it technically refers only to the Thoroughbred breed...
horse farms. Other forms of agriculture flourished as well, including the cultivation of grapes, hemp, and tobacco. The first commercial winery
Winery
A winery is a building or property that produces wine, or a business involved in the production of wine, such as a wine company. Some wine companies own many wineries. Besides wine making equipment, larger wineries may also feature warehouses, bottling lines, laboratories, and large expanses of...
in the United States was opened in the Bluegrass Region in 1801 in present day Jessamine County by a group of Swiss immigrants.

The Bluegrass region is characterized by underlying fossiliferous limestone
Limestone
Limestone is a sedimentary rock composed largely of the minerals calcite and aragonite, which are different crystal forms of calcium carbonate . Many limestones are composed from skeletal fragments of marine organisms such as coral or foraminifera....
, dolostone
Dolomite
Dolomite is a carbonate mineral composed of calcium magnesium carbonate CaMg2. The term is also used to describe the sedimentary carbonate rock dolostone....
, and shale
Shale
Shale is a fine-grained, clastic sedimentary rock composed of mud that is a mix of flakes of clay minerals and tiny fragments of other minerals, especially quartz and calcite. The ratio of clay to other minerals is variable. Shale is characterized by breaks along thin laminae or parallel layering...
of the Ordovician
Ordovician
The Ordovician is a geologic period and system, the second of six of the Paleozoic Era, and covers the time between 488.3±1.7 to 443.7±1.5 million years ago . It follows the Cambrian Period and is followed by the Silurian Period...
geological
Geology
Geology is the science comprising the study of solid Earth, the rocks of which it is composed, and the processes by which it evolves. Geology gives insight into the history of the Earth, as it provides the primary evidence for plate tectonics, the evolutionary history of life, and past climates...
age. Hills are generally rolling, and the soil is highly fertile for growing pasture. Since antebellum years, the Bluegrass Region has been a center for breeding quality livestock, especially Thoroughbred race horses.

The Kentucky Bluegrass is bounded on the east by the Cumberland Plateau
Cumberland Plateau
The Cumberland Plateau is the southern part of the Appalachian Plateau. It includes much of eastern Kentucky and western West Virginia, part of Tennessee, and a small portion of northern Alabama and northwest Georgia . The terms "Allegheny Plateau" and the "Cumberland Plateau" both refer to the...
, with the Pottsville Escarpment
Pottsville Escarpment
The Pottsville Escarpment is a resistant sandstone belt of cliffs and steep sided, narrow crested valleys in eastern Kentucky, USA. It features rock shelters, waterfalls, and natural bridges...
forming the boundary. On the south and west, it borders the Pennyroyal Plateau
Pennyroyal Plateau
The Pennyroyal Plateau, or, as it is more commonly called in Kentucky, the Pennyrile, is a large area of the state that features rolling hills, caves, and karst topography in general. It is also called the "Mississippi Plateau"....
, (also called the Pennyrile), with Muldraugh Hill
Muldraugh Hill
Muldraugh Hill is an escarpment in central Kentucky separating the Bluegrass on the north and north-east from the Pennyrile on the south and south-west...
, another escarpment
Escarpment
An escarpment is a steep slope or long cliff that occurs from erosion or faulting and separates two relatively level areas of differing elevations.-Description and variants:...
, forming the boundary. Much of the region is drained by the Kentucky River
Kentucky River
The Kentucky River is a tributary of the Ohio River, long, in the U.S. state of Kentucky. The river and its tributaries drain much of the central region of the state, with its upper course passing through the coal-mining regions of the Cumberland Mountains, and its lower course passing through the...
and its tributaries. The river cuts a deep canyon
Canyon
A canyon or gorge is a deep ravine between cliffs often carved from the landscape by a river. Rivers have a natural tendency to reach a baseline elevation, which is the same elevation as the body of water it will eventually drain into. This forms a canyon. Most canyons were formed by a process of...
called the Kentucky River Palisades
Kentucky River Palisades
The Kentucky River Palisades are a series of steep, scenic gorges and limestone outcroppings that stretch for approximately 100 mi , along the Kentucky River in central Kentucky in the United States....
through the region, preserving meander
Meander
A meander in general is a bend in a sinuous watercourse. A meander is formed when the moving water in a stream erodes the outer banks and widens its valley. A stream of any volume may assume a meandering course, alternately eroding sediments from the outside of a bend and depositing them on the...
s that indicate that the river was once a mature low valley that was suddenly uplifted. Particularly near the Kentucky River, the region exhibits Karst
KARST
Kilometer-square Area Radio Synthesis Telescope is a Chinese telescope project to which FAST is a forerunner. KARST is a set of large spherical reflectors on karst landforms, which are bowlshaped limestone sinkholes named after the Kras region in Slovenia and Northern Italy. It will consist of...
topography, with sinkholes, caves, and disappearing streams that drain underground to the river.