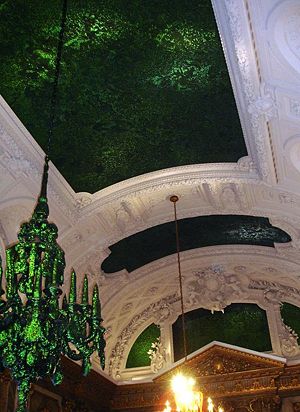 Jan Fabre is a Belgian
Belgium
Belgium , officially the Kingdom of Belgium, is a federal state in Western Europe. It is a founding member of the European Union and hosts the EU's headquarters, and those of several other major international organisations such as NATO.Belgium is also a member of, or affiliated to, many...
multidisciplinary artist
Artist
An artist is a person engaged in one or more of any of a broad spectrum of activities related to creating art, practicing the arts and/or demonstrating an art. The common usage in both everyday speech and academic discourse is a practitioner in the visual arts only...
, playwright
Playwright
A playwright, also called a dramatist, is a person who writes plays.The term is not a variant spelling of "playwrite", but something quite distinct: the word wright is an archaic English term for a craftsman or builder...
, stage director, choreographer and designer
Designer
A designer is a person who designs. More formally, a designer is an agent that "specifies the structural properties of a design object". In practice, anyone who creates tangible or intangible objects, such as consumer products, processes, laws, games and graphics, is referred to as a...
.

He studied at the Municipal Institute of Decorative Arts and the Royal Academy of Fine Arts in Antwerp. Between 1976 and 1980 he wrote his first scripts for the theatre and made his debut performances.

Established in 1986, Troubleyn/Jan Fabre is a theatre company with extensive international operations, with its home base in Antwerp, Belgium.

From 1980 he began his career as a stage director and stage designer:

He explores the relationships between drawing and sculpture. He also makes sculptures in bronze (among them The man who measures the clouds and Searching for Utopia
Utopia
Utopia is an ideal community or society possessing a perfect socio-politico-legal system. The word was imported from Greek by Sir Thomas More for his 1516 book Utopia, describing a fictional island in the Atlantic Ocean. The term has been used to describe both intentional communities that attempt...
) and with beetles.

His decoration of the ceiling of the Royal Palace in Brussels Heaven of Delight (made out of one million six hundred thousand jewel-scarab wing cases) is widely praised. In 2004 he erected Totem, a giant bug stuck on a 70 foot steel needle, on the Ladeuzeplein
Ladeuzeplein
The Mgr. Ladeuzeplein is a square in the center of Leuven . The square was named after a former rector of the Catholic University Leuven, Monseigneur Paulin Ladeuze. The Ladeuzeplein is the largest square in Leuven...
in Leuven
Leuven
Leuven is the capital of the province of Flemish Brabant in the Flemish Region, Belgium...
.

In 2008, Jan Fabre's The Angel of Metamorphosis exhibition was held at the Louvre Museum.