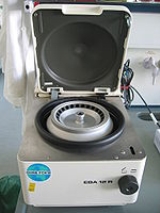 Overview
A centrifuge is a piece of equipment, generally driven by an electric motor (some older models were spun by hand), that puts an object in rotation around a fixed axis
Rotation around a fixed axis
Rotation around a fixed axis is a special case of rotational motion. The fixed axis hypothesis exclude the possibility of a moving axis, and cannot describe such phenomena as wobbling or precession. According to Euler's rotation theorem, simultaneous rotation around more than one axis at the same...
, applying a force perpendicular to the axis. The centrifuge works using the sedimentation principle
Sedimentation
Sedimentation is the tendency for particles in suspension to settle out of the fluid in which they are entrained, and come to rest against a barrier. This is due to their motion through the fluid in response to the forces acting on them: these forces can be due to gravity, centrifugal acceleration...
, where the centripetal acceleration causes more dense substances to separate out along the radial direction (the bottom of the tube). By the same token, lighter objects will tend to move to the top (of the tube; in the rotating picture, move to the centre).

In the picture shown, the rotating unit, called the rotor, has fixed holes drilled at an angle (to the vertical).

Hi I was seaprating the cells from the medium by centrifuging at 4,000rpm. but i think, from the supernatant, it does not look like the cells are sea...

I want to know all details about pusher centrifuge.How its works with all technical data and dimentions.
More