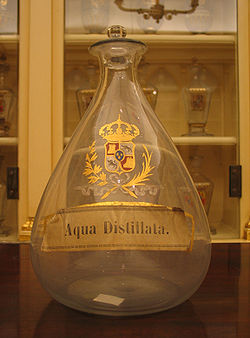 Distilled water is water
Water
Water is a chemical substance with the chemical formula H2O. A water molecule contains one oxygen and two hydrogen atoms connected by covalent bonds. Water is a liquid at ambient conditions, but it often co-exists on Earth with its solid state, ice, and gaseous state . Water also exists in a...
that has many of its impurities
Impurity
Impurities are substances inside a confined amount of liquid, gas, or solid, which differ from the chemical composition of the material or compound.Impurities are either naturally occurring or added during synthesis of a chemical or commercial product...
removed through distillation
Distillation
Distillation is a method of separating mixtures based on differences in volatilities of components in a boiling liquid mixture. Distillation is a unit operation, or a physical separation process, and not a chemical reaction....
. Distillation involves boiling
Boiling
Boiling is the rapid vaporization of a liquid, which occurs when a liquid is heated to its boiling point, the temperature at which the vapor pressure of the liquid is equal to the pressure exerted on the liquid by the surrounding environmental pressure. While below the boiling point a liquid...
the water and then condensing the steam
Steam
Steam is the technical term for water vapor, the gaseous phase of water, which is formed when water boils. In common language it is often used to refer to the visible mist of water droplets formed as this water vapor condenses in the presence of cooler air...
into a clean container.

Fresh water has been distilled from sea water since at least ca. 200 AD when the process was clearly described by Alexander of Aphrodisias
Alexander of Aphrodisias
Alexander of Aphrodisias was a Peripatetic philosopher and the most celebrated of the Ancient Greek commentators on the writings of Aristotle. He was a native of Aphrodisias in Caria, and lived and taught in Athens at the beginning of the 3rd century, where he held a position as head of the...
. Its history predates this, as a passage in Aristotle
Aristotle
Aristotle was a Greek philosopher and polymath, a student of Plato and teacher of Alexander the Great. His writings cover many subjects, including physics, metaphysics, poetry, theater, music, logic, rhetoric, linguistics, politics, government, ethics, biology, and zoology...
's Meteorologica (II.3, 358b16) refers to the distillation of water.

Distilled water is also commonly used to top off lead acid batteries used in cars and trucks. The presence of other ions commonly found in tap water will cause a drastic reduction in an automobile's battery lifespan.

Distilled water is preferable to tap water for use in automotive cooling systems. The minerals and ions typically found in tap water can be corrosive to internal engine components, and can cause a more rapid depletion of the anti-corrosion additives found in most antifreeze
Antifreeze
Antifreeze is a freeze preventive used in internal combustion engines and other heat transfer applications, such as HVAC chillers and solar water heaters....
formulations.

Distilled water is also preferable to tap water for use in model steam engine boilers and model engines of other types. Mineral build-up resulting from the use of tap water in model boilers can severely reduce the efficiency of the boilers if run for long periods. This build-up is known as boiler scale.

Using distilled water in steam iron
Ironing
Ironing is the use of a heated tool to remove wrinkles from fabric. The heating is commonly done to a temperature of 180-220 °Celsius, depending on the fabric. Ironing works by loosening the bonds between the long-chain polymer molecules in the fibers of the material...
s for pressing clothes can help reduce mineral build-up and make the iron last longer. However, many iron manufacturers say that distilled water is no longer necessary in their irons.

Some people use distilled water for household aquarium
Aquarium
An aquarium is a vivarium consisting of at least one transparent side in which water-dwelling plants or animals are kept. Fishkeepers use aquaria to keep fish, invertebrates, amphibians, marine mammals, turtles, and aquatic plants...
s because it lacks the chemicals found in tap water
Tap water
Tap water is a principal component of "indoor plumbing", which became available in urban areas of the developed world during the last quarter of the 19th century, and common during the mid-20th century...
supplies. It is important to supplement distilled water when using it for fishkeeping
Fishkeeping
Fishkeeping is a popular hobby concerned with keeping fish in a home aquarium or garden pond. There is also a fishkeeping industry, as a branch of agriculture.-Types of fishkeeping systems:...
; it is too pure to sustain proper chemistry to support an aquarium ecosystem.

Distilled water is also an essential component for use in cigar humidor
Humidor
A humidor is any kind of box or room with constant humidity, and ideal temperature, used to store cigars, cigarettes, or pipe tobacco. For private use, small wooden or acrylic glass humidor boxes for a few dozen cigars are used, while cigar shops may have walk-in humidors, sometimes consisting of a...
s. Mineral build-up resulting from the use of tap water (including bottled water
Bottled water
Bottled water is drinking water packaged in plastic or glass water bottles. Bottled water may be carbonated or not...
) will reduce the effectiveness of the humidor.

In addition, some home brewers, who are interested in brewing a Traditional European Pilsner, will dilute their hard water with distilled water so as to mimic the soft waters of Pilsen.

Another application is to increase the density of the air to assist early airplane jet engines during takeoff in "hot and high" atmospheric conditions, as was used on the early Boeing 707
Boeing 707
The Boeing 707 is a four-engine narrow-body commercial passenger jet airliner developed by Boeing in the early 1950s. Its name is most commonly pronounced as "Seven Oh Seven". The first airline to operate the 707 was Pan American World Airways, inaugurating the type's first commercial flight on...
.

Distilled water is also used in Constant Positive Airway Pressure (CPAP) machines. These machines are used by people with sleep apnea to help breathing throughout sleep cycles. The water evaporates and is used to humidify the air going into the users mouth. Distilled water will not leave any contaminants behind when the humidifier in the CPAP machine evaporates the water.

Up until World War Two, distilling sea water to fresh water was time consuming and expensive in fuel. The saying was: "It takes one gallon of fuel to make one gallon of fresh water." Shortly before the war, Dr. R.V. Kleinschmidt developed the compression still, that became known as the Kleinschmidt Still, for extracting fresh water from sea water or contaminated water. By compressing the steam produced by boiling water, 175 gallons of fresh water could be extracted from sea water for every gallon of fuel used. During World War Two this unit became standard on Allied ships and on trailer mounts for armies. This method was in widespread use for ships and portable water distilling units during the latter half of the century. Modern vessels now use flash-type evaporators
Flash evaporation
Flash evaporation is the partial vapor that occurs when a saturated liquid stream undergoes a reduction in pressure by passing through a throttling valve or other throttling device. This process is one of the simplest unit operations...
to boil sea water, heating the water to between 70-80°C and evaporating the water in a vacuum - this is then collected as condensation before being stored.

Solar still
Solar still
A solar still is a low-tech way of distilling water, powered by the heat of the sun . Two basic types of solar stills are box and pit stills. In a solar still, impure water is contained outside the collector, where it is evaporated by sunlight shining through clear plastic...
s can be relatively simple to design and build, with very cheap materials.

Bottled distilled water can usually be found in supermarkets or pharmacies, and home water distillers are available as well. Water purification
Water purification
Water purification is the process of removing undesirable chemicals, materials, and biological contaminants from contaminated water. The goal is to produce water fit for a specific purpose...
, such as distillation, is especially important in regions where water resources or tap water is not suitable for ingesting without boiling or chemical treatment.

Municipal water supplies almost always contain trace components at levels, which are regulated to be safe for consumption.. Some other components such as trace levels of aluminium
Aluminium
Aluminium or aluminum is a silvery white member of the boron group of chemical elements. It has the symbol Al, and its atomic number is 13. It is not soluble in water under normal circumstances....
may result from the treatment process (see Water purification). Some components, such as fluoride
Fluoride
Fluoride is the anion F−, the reduced form of fluorine when as an ion and when bonded to another element. Both organofluorine compounds and inorganic fluorine containing compounds are called fluorides. Fluoride, like other halides, is a monovalent ion . Its compounds often have properties that are...
and other ions, are not removed through conventional water treatment; however, distillation can eliminate some of these impurities.

Distilled water is also used as drinking water in arid seaside areas which do not have sufficient freshwater, via desalination of seawater.

The drinking of distilled water has been both advocated and discouraged for health reasons. The lack of naturally occurring minerals in distilled water has raised some concerns. The Journal of General Internal Medicine
Journal of General Internal Medicine
The Journal of General Internal Medicine is a peer-reviewed medical journal established in 1986 and covering internal medicine in general. It is published by Springer and is the official journal of the Society of General Internal Medicine...
published a study on the mineral contents of different waters available in the US. The study concluded:
It is often observed that consumption of "hard" water
Hard water
Hard water is water that has high mineral content . Hard water has high concentrations of Ca2+ and Mg2+ ions. Hard water is generally not harmful to one's health but can pose serious problems in industrial settings, where water hardness is monitored to avoid costly breakdowns in boilers, cooling...
, or water that has some minerals, is associated with beneficial cardiovascular effects. As noted in the American Journal of Epidemiology
American Journal of Epidemiology
The American Journal of Epidemiology is a peer reviewed journal for empirical research findings, opinion pieces and methodological developments in the field of epidemiological research. It is published semimonthly, and has an impact of 5.454, ranking it 6th out of 105 Journals in the field....
, consumption of hard drinking water is negatively correlated with atherosclerotic heart disease
Heart disease
Heart disease, cardiac disease or cardiopathy is an umbrella term for a variety of diseases affecting the heart. , it is the leading cause of death in the United States, England, Canada and Wales, accounting for 25.4% of the total deaths in the United States.-Types:-Coronary heart disease:Coronary...
. Since distilled water is free of minerals, it will not have these potential benefits.

Because distilled water lacks fluoride
Water fluoridation
Water fluoridation is the controlled addition of fluoride to a public water supply to reduce tooth decay. Fluoridated water has fluoride at a level that is effective for preventing cavities; this can occur naturally or by adding fluoride...
, the drinking of distilled water may increase the risk of tooth decay due to a lack of this element. Of course fluoride can still be applied to the teeth alone with toothpaste and fluoride therapy
Fluoride therapy
Fluoride therapy is the delivery of fluoride to the teeth topically or systemically in order to prevent tooth decay which results in cavities. Most commonly, fluoride is applied topically to the teeth using gels, varnishes, toothpaste/dentifrices or mouth rinse. Systemic delivery involves...
but topical application of fluoride will not help pre-eruptive developing teeth incorporate fluoride into the structure of the tooth making it more resistant to erosion.