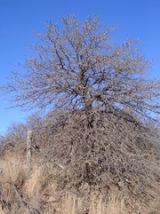 Encyclopedia
Quercus marilandica is a small oak
Oak
An oak is a tree or shrub in the genus Quercus , of which about 600 species exist. "Oak" may also appear in the names of species in related genera, notably Lithocarpus...
, one of the red oak group Quercus sect. Lobatae, but fairly isolated from the others. It is native to the southern and central United States
United States
The United States of America is a federal constitutional republic comprising fifty states and a federal district...
, with populations following the eastern seaboard north to Long Island
Long Island
Long Island is an island located in the southeast part of the U.S. state of New York, just east of Manhattan. Stretching northeast into the Atlantic Ocean, Long Island contains four counties, two of which are boroughs of New York City , and two of which are mainly suburban...
.
It is a small deciduous
Deciduous
Deciduous means "falling off at maturity" or "tending to fall off", and is typically used in reference to trees or shrubs that lose their leaves seasonally, and to the shedding of other plant structures such as petals after flowering or fruit when ripe...
tree
Tree
A tree is a perennial woody plant. It is most often defined as a woody plant that has many secondary branches supported clear of the ground on a single main stem or trunk with clear apical dominance. A minimum height specification at maturity is cited by some authors, varying from 3 m to...
growing to 15 m tall, with bark cracked into rectangular black plates with narrow orange fissures. The leaves
Leaf
A leaf is an organ of a vascular plant, as defined in botanical terms, and in particular in plant morphology. Foliage is a mass noun that refers to leaves as a feature of plants....
are 7-20 cm long and broad, and typically flare from a tapered base to a broad three-lobed bell shape with only shallow indentations. They are dark green and glossy above, pubescent underneath, and often remain attached to the twigs through the winter after turning colors from red to brown in the fall. The acorn
Acorn
The acorn, or oak nut, is the nut of the oaks and their close relatives . It usually contains a single seed , enclosed in a tough, leathery shell, and borne in a cup-shaped cupule. Acorns vary from 1–6 cm long and 0.8–4 cm broad...
is small, 12-20 mm long and 10-18 mm broad; like other red oaks, it takes 18 months to mature.

The Blackjack oak grows in poor, thin, dry, rocky or sandy soils where few other woody plants can thrive, usually on low ground, from sea level up to 900 m altitude. It does not have the beautiful form of many oaks, but is nonetheless a valuable tree for growing in problem sites. It is sometimes an understory tree in pine stands on sandy knolls in the southeastern US. Along the coastal plain of New Jersey
New Jersey
New Jersey is a state in the Northeastern and Middle Atlantic regions of the United States. , its population was 8,791,894. It is bordered on the north and east by the state of New York, on the southeast and south by the Atlantic Ocean, on the west by Pennsylvania and on the southwest by Delaware...
the probability of finding this species is increased in relatively sunny, open areas such as those near coastal salt marshes. It often occurs near Scarlet
Scarlet Oak
Quercus coccinea, the scarlet oak, is an oak in the red oak section Quercus sect. Lobatae. The scarlet oak can be mistaken for the pin oak, the black oak, or occasionally the red oak. On scarlet oak the sinuses between lobes are "C"-shaped in comparison to pin oak , which has "U"-shaped sinuses...
and Post Oak
Post oak
Quercus stellata is an oak in the white oak group. It is a small tree, typically 10–15 m tall and 30–60 cm trunk diameter, though occasional specimens reach 30 m tall and 140 cm diameter. It is native to the eastern United States, from Connecticut in the northeast, west to southern Iowa, southwest...
s as well as Pitch Pine
Pitch Pine
The Pitch Pine, Pinus rigida, is a small-to-medium sized pine, native to eastern North America. This species occasionally hybridizes with other pine species such as Loblolly Pine , Shortleaf Pine , and Pond Pine The Pitch Pine, Pinus rigida, is a small-to-medium sized (6-30 meters or 20-100 feet)...
; understory companions include winged sumac, bracken
Bracken
Bracken are several species of large, coarse ferns of the genus Pteridium. Ferns are vascular plants that have alternating generations, large plants that produce spores and small plants that produce sex cells . Brackens are in the family Dennstaedtiaceae, which are noted for their large, highly...
, sweetfern, and bayberry.

A variety, Quercus marilandica Münchhausen var. ashei Sudworth
George Bishop Sudworth
George Bishop Sudworth was an American botanist. At the time of his death, he was the Chief Dendrologist of the US Forest Service.During his life, Sudworth published several books, but his most famous is A Check List of the Forest Trees of the United States.Sudworth discovered many new species and...
(D. M. Hunt 1989), grows in the western portions of its range—northern Texas, Oklahoma, and into southern Kansas. In this area, Blackjack, along with Post oak
Post oak
Quercus stellata is an oak in the white oak group. It is a small tree, typically 10–15 m tall and 30–60 cm trunk diameter, though occasional specimens reach 30 m tall and 140 cm diameter. It is native to the eastern United States, from Connecticut in the northeast, west to southern Iowa, southwest...
, forms a semi-savanna area composed of forested strips intermixed with prairie grass glades along the eastern edge of the southern Great Plains
Great Plains
The Great Plains are a broad expanse of flat land, much of it covered in prairie, steppe and grassland, which lies west of the Mississippi River and east of the Rocky Mountains in the United States and Canada. This area covers parts of the U.S...
. This semi-savanna is known as the Cross Timbers
Cross Timbers
The term Cross Timbers is used to describe a strip of land in the United States that runs from southeastern Kansas across Central Oklahoma to Central Texas...
. Blackjacks in the Cross Timbers can grow from 50 to 60 ft (15.2 to 18.3 m) high with a trunk diameter of 16 inches (40.6 cm), but seldom reach more than 40 feet (12.2 m). The leaves are from 4 to 10 in (10.2 to 25.4 cm) in length and about the same width. Blackjack acorns provide food for both whitetail deer and wild turkey. Blackjacks may, however, cause tannic acid
Tannic acid
Tannic acid is a specific commercial form of tannin, a type of polyphenol. Its weak acidity is due to the numerous phenol groups in the structure...
poisoning in cattle.

The wood
Wood
Wood is a hard, fibrous tissue found in many trees. It has been used for hundreds of thousands of years for both fuel and as a construction material. It is an organic material, a natural composite of cellulose fibers embedded in a matrix of lignin which resists compression...
is very dense, so much so that it will rapidly dull chainsaws. The density of the wood causes a very hot flame when burnt, and is a good heat source for barbecue
Barbecue
Barbecue or barbeque , used chiefly in the United States, Canada, the United Kingdom, New Zealand and Australia is a method and apparatus for cooking meat, poultry and occasionally fish with the heat and hot smoke of a fire, smoking wood, or hot coals of...
s and wood-burning stoves, but not desirable in wood fireplace
Fireplace
A fireplace is an architectural structure to contain a fire for heating and, especially historically, for cooking. A fire is contained in a firebox or firepit; a chimney or other flue allows gas and particulate exhaust to escape...
s because the heat causes "popping", increasing the risk of wild fires.