Adult birds have black bodies with a white wing patch, a thin dark bill, and red legs and feet. They show white wing linings in flight. In winter, the upperparts are pale grey and the underparts are white. The wings remain black with the large white patch on the inner wing. They are 32–38 cm in length, and with a 49–58 cm wingspan.
Their breeding habitat is rocky shores, cliffs and islands on northern Atlantic
Atlantic Ocean
The Atlantic Ocean is the second-largest of the world's oceanic divisions. With a total area of about , it covers approximately 20% of the Earth's surface and about 26% of its water surface area...
coasts in eastern North America
North America
North America is a continent wholly within the Northern Hemisphere and almost wholly within the Western Hemisphere. It is also considered a northern subcontinent of the Americas...
as far south as Maine
Maine
Maine is a state in the New England region of the northeastern United States, bordered by the Atlantic Ocean to the east and south, New Hampshire to the west, and the Canadian provinces of Quebec to the northwest and New Brunswick to the northeast. Maine is both the northernmost and easternmost...
, and in western Europe
Europe
Europe is, by convention, one of the world's seven continents. Comprising the westernmost peninsula of Eurasia, Europe is generally 'divided' from Asia to its east by the watershed divides of the Ural and Caucasus Mountains, the Ural River, the Caspian and Black Seas, and the waterways connecting...
as far south as Ireland
Ireland
Ireland is an island to the northwest of continental Europe. It is the third-largest island in Europe and the twentieth-largest island on Earth...
.They are one of the few birds to breed on Surtsey, Iceland a new volcanic island. In the UK
United Kingdom
The United Kingdom of Great Britain and Northern IrelandIn the United Kingdom and Dependencies, other languages have been officially recognised as legitimate autochthonous languages under the European Charter for Regional or Minority Languages...
it is fairly common breeding bird in western and northern Scotland
Scotland
Scotland is a country that is part of the United Kingdom. Occupying the northern third of the island of Great Britain, it shares a border with England to the south and is bounded by the North Sea to the east, the Atlantic Ocean to the north and west, and the North Channel and Irish Sea to the...
and Northern Ireland
Northern Ireland
Northern Ireland is one of the four countries of the United Kingdom. Situated in the north-east of the island of Ireland, it shares a border with the Republic of Ireland to the south and west...
. In the rest of Great Britain they only breed at St. Bees Head
St. Bees Head
St Bees Head is a headland on the North West coast of the English county of Cumbria and is named after the nearby village of St Bees.It lies on the Cumbria Coastal Way and WainwrightCoast to Coast long-distance footpaths, it is the only stretch of Heritage Coast on the English coastline between the...
in Cumbria
Cumbria
Cumbria , is a non-metropolitan county in North West England. The county and Cumbria County Council, its local authority, came into existence in 1974 after the passage of the Local Government Act 1972. Cumbria's largest settlement and county town is Carlisle. It consists of six districts, and in...
, the Isle of Man
Isle of Man
The Isle of Man , otherwise known simply as Mann , is a self-governing British Crown Dependency, located in the Irish Sea between the islands of Great Britain and Ireland, within the British Isles. The head of state is Queen Elizabeth II, who holds the title of Lord of Mann. The Lord of Mann is...
and on east Anglesey
Anglesey
Anglesey , also known by its Welsh name Ynys Môn , is an island and, as Isle of Anglesey, a county off the north west coast of Wales...
in north Wales
Wales
Wales is a country that is part of the United Kingdom and the island of Great Britain, bordered by England to its east and the Atlantic Ocean and Irish Sea to its west. It has a population of three million, and a total area of 20,779 km²...
. Some birds breed in Alaska
Alaska
Alaska is the largest state in the United States by area. It is situated in the northwest extremity of the North American continent, with Canada to the east, the Arctic Ocean to the north, and the Pacific Ocean to the west and south, with Russia further west across the Bering Strait...
where their range overlaps with the Pigeon Guillemot
Pigeon Guillemot
The Pigeon Guillemot is a medium-sized alcid endemic to the Pacific. They closely resemble the other members of the genus Cepphus, particularly the Black Guillemot, which is slightly smaller....
. They usually lay their eggs in rocky sites near water.

These birds often overwinter in their breeding areas, moving to open waters if necessary, but usually not migrating
Bird migration
Bird migration is the regular seasonal journey undertaken by many species of birds. Bird movements include those made in response to changes in food availability, habitat or weather. Sometimes, journeys are not termed "true migration" because they are irregular or in only one direction...
very far south.

They dive for food from the surface, swimming underwater. They mainly eat fish
Fish
Fish are a paraphyletic group of organisms that consist of all gill-bearing aquatic vertebrate animals that lack limbs with digits. Included in this definition are the living hagfish, lampreys, and cartilaginous and bony fish, as well as various extinct related groups...
and crustaceans, also some mollusks, insect
Insect
Insects are a class of living creatures within the arthropods that have a chitinous exoskeleton, a three-part body , three pairs of jointed legs, compound eyes, and two antennae...
s and plant material.

The call in the breeding season is a high whistle. The red gape
Gape
In bird anatomy, the gape is the interior of the open mouth of a bird and the gape flange is the region where the two mandibles join together, at the base of the beak...
is also prominent then. 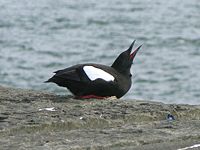