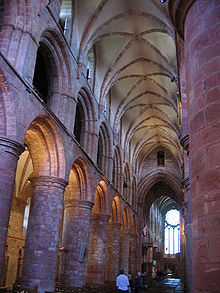 The Bishop of Orkney was the ecclesiastical head of the Diocese
Diocese
A diocese is the district or see under the supervision of a bishop. It is divided into parishes.An archdiocese is more significant than a diocese. An archdiocese is presided over by an archbishop whose see may have or had importance due to size or historical significance...
of Orkney, one of thirteen medieval bishoprics within the territory of modern Scotland
Scotland
Scotland is a country that is part of the United Kingdom. Occupying the northern third of the island of Great Britain, it shares a border with England to the south and is bounded by the North Sea to the east, the Atlantic Ocean to the north and west, and the North Channel and Irish Sea to the...
. It included both Orkney and Shetland. It was based for almost all of its history at St. Magnus' Cathedral
St. Magnus' Cathedral, Kirkwall
St. Magnus Cathedral, Kirkwall dominates the skyline of Kirkwall, the main town of Orkney, a group of islands off the north coast of mainland Scotland. It is the most northerly cathedral in the British Isles, a fine example of Romanesque architecture built for the bishops of Orkney when the...
, Kirkwall
Kirkwall
Kirkwall is the biggest town and capital of Orkney, off the coast of northern mainland Scotland. The town is first mentioned in Orkneyinga saga in the year 1046 when it is recorded as the residence of Rögnvald Brusason the Earl of Orkney, who was killed by his uncle Thorfinn the Mighty...
.

The bishopric appears to have been suffragan of the Archbishop of York
Archbishop of York
The Archbishop of York is a high-ranking cleric in the Church of England, second only to the Archbishop of Canterbury. He is the diocesan bishop of the Diocese of York and metropolitan of the Province of York, which covers the northern portion of England as well as the Isle of Man...
(with intermittent control exercised by the Archbishop of Hamburg-Bremen
Archbishopric of Bremen
The Archdiocese of Bremen was a historical Roman Catholic diocese and formed from 1180 to 1648 an ecclesiastical state , named Prince-Archbishopric of Bremen within the Holy Roman Empire...
) until the creation of the Archbishopric of Trondheim (Niðaros
Trondheim
Trondheim , historically, Nidaros and Trondhjem, is a city and municipality in Sør-Trøndelag county, Norway. With a population of 173,486, it is the third most populous municipality and city in the country, although the fourth largest metropolitan area. It is the administrative centre of...
) in 1152. Although Orkney itself did not become politically part of Scotland until 1468, the Scottish kings and political community had been pushing for control of the islands for centuries. The see, however, remained under the nominal control of Trondheim until the creation of the Archbishopric of St. Andrews in 1472, when it became for the first time an officially Scottish bishopric. The Bishopric's links with Rome ceased to exist after the Scottish Reformation
Scottish Reformation
The Scottish Reformation was Scotland's formal break with the Papacy in 1560, and the events surrounding this. It was part of the wider European Protestant Reformation; and in Scotland's case culminated ecclesiastically in the re-establishment of the church along Reformed lines, and politically in...
. The bishopric continued, saving temporary abolition between 1638 and 1661, under the episcopal Church of Scotland
Church of Scotland
The Church of Scotland, known informally by its Scots language name, the Kirk, is a Presbyterian church, decisively shaped by the Scottish Reformation....
until the Revolution of 1688. Episcopacy in the established church in Scotland was permanently abolished in 1689, but in 1878 the Catholic Church re-established the bishopric system, and Orkney came under the resurrected and reformatted Diocese of Aberdeen
Diocese of Aberdeen
Diocese of Aberdeen was one of the 13 dioceses of the Scottish church, before the abolition of the episcopacy in 1689.-Early history:...
. A Scottish Episcopal Church
Scottish Episcopal Church
The Scottish Episcopal Church is a Christian church in Scotland, consisting of seven dioceses. Since the 17th century, it has had an identity distinct from the presbyterian Church of Scotland....
bishopric encompassing Orkney was created in 1865, as the Bishopric of Aberdeen and Orkney.