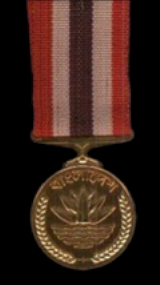 Encyclopedia
The Bir Sreshtho (The Most Valiant Hero) is the highest military award of Bangladesh
Bangladesh
Bangladesh , officially the People's Republic of Bangladesh is a sovereign state located in South Asia. It is bordered by India on all sides except for a small border with Burma to the far southeast and by the Bay of Bengal to the south...
. It was awarded to seven freedom fighters who showed utmost bravery and died in action for their nation. They are considered martyr
Martyr
A martyr is somebody who suffers persecution and death for refusing to renounce, or accept, a belief or cause, usually religious.-Meaning:...
s.

All the recipients of this award were killed in action during the Liberation War
Bangladesh Liberation War
The Bangladesh Liberation War was an armed conflict pitting East Pakistan and India against West Pakistan. The war resulted in the secession of East Pakistan, which became the independent nation of Bangladesh....
of 1971. The award was declared by the Bangladesh Gazette 15 December 1973. It's the highest military award of Bangladesh. Similar to the American Medal of Honor
Medal of Honor
The Medal of Honor is the highest military decoration awarded by the United States government. It is bestowed by the President, in the name of Congress, upon members of the United States Armed Forces who distinguish themselves through "conspicuous gallantry and intrepidity at the risk of his or her...
or the British Victoria Cross
Victoria Cross
The Victoria Cross is the highest military decoration awarded for valour "in the face of the enemy" to members of the armed forces of various Commonwealth countries, and previous British Empire territories....
. It has only been given in 1973 to 7 people. Listed below are the 7 people to have received the Bir Srestho.They all are considered as Shaheed(Martyrs)


Note: When referring to martyrs, the word 'shaheed' is often put before each individuals name as a mark of respect. The list has been prepared as on the declaration by the Bangladesh Gazette.