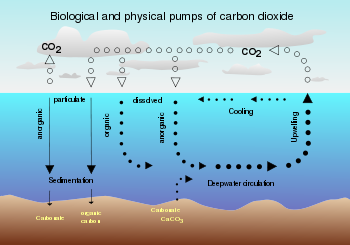 In ocean
Ocean
An ocean is a major body of saline water, and a principal component of the hydrosphere. Approximately 71% of the Earth's surface is covered by ocean, a continuous body of water that is customarily divided into several principal oceans and smaller seas.More than half of this area is over 3,000...
ic biogeochemistry
Biogeochemistry
Biogeochemistry is the scientific discipline that involves the study of the chemical, physical, geological, and biological processes and reactions that govern the composition of the natural environment...
, the biological pump is the sum of a suite of biologically-mediated processes that transport carbon
Carbon
Carbon is the chemical element with symbol C and atomic number 6. As a member of group 14 on the periodic table, it is nonmetallic and tetravalent—making four electrons available to form covalent chemical bonds...
from the surface euphotic zone to the ocean's interior.

The organic carbon that forms the biological pump is transported primarily by sinking particulate material, for example dead organisms (including algal
Algae
Algae are a large and diverse group of simple, typically autotrophic organisms, ranging from unicellular to multicellular forms, such as the giant kelps that grow to 65 meters in length. They are photosynthetic like plants, and "simple" because their tissues are not organized into the many...
mats) or faecal pellets. However, some carbon reaches the deep ocean as dissolved organic carbon (DOC) by physical transport processes such as downwelling
Downwelling
Downwelling is the process of accumulation and sinking of higher density material beneath lower density material, such as cold or saline water beneath warmer or fresher water or cold air beneath warm air. It is the sinking limb of a convection cell. Upwelling is the opposite process and together...
rather than sinking.

Carbon reaching the deep ocean by these means is either organic carbon or particulate inorganic carbon such as calcium carbonate
Calcium carbonate
Calcium carbonate is a chemical compound with the formula CaCO3. It is a common substance found in rocks in all parts of the world, and is the main component of shells of marine organisms, snails, coal balls, pearls, and eggshells. Calcium carbonate is the active ingredient in agricultural lime,...
(CaCO3). The former is a component of all organisms, the latter only of calcifying organisms, for example coccolithophore
Coccolithophore
Coccolithophores are single-celled algae, protists, and phytoplankton belonging to the division of haptophytes. They are distinguished by special calcium carbonate plates of uncertain function called coccoliths , which are important microfossils...
s, foraminiferans or pteropods. In reference to the different use of these materials in organisms, the organic
Organic chemistry
Organic chemistry is a subdiscipline within chemistry involving the scientific study of the structure, properties, composition, reactions, and preparation of carbon-based compounds, hydrocarbons, and their derivatives...
carbon portion of this transport is known as the soft tissues pump, while the inorganic
Inorganic chemistry of carbon
Scientists once thought that organic compounds are or could only be created by living organisms. Over time, human have learned how to synthesize organic compounds. There is an immense number of distinct compounds that contain carbon atoms. Some sources suggest that there are about ten million known...
carbon portion is known as the hard tissues pump.

In the case of organic material, remineralisation
Remineralisation
In biogeochemistry, remineralisation refers to the transformation of organic molecules to inorganic forms, typically mediated by biological activity....
(or decomposition
Decomposition
Decomposition is the process by which organic material is broken down into simpler forms of matter. The process is essential for recycling the finite matter that occupies physical space in the biome. Bodies of living organisms begin to decompose shortly after death...
) processes such as bacteria
Bacteria
Bacteria are a large domain of prokaryotic microorganisms. Typically a few micrometres in length, bacteria have a wide range of shapes, ranging from spheres to rods and spirals...
l respiration
Cellular respiration
Cellular respiration is the set of the metabolic reactions and processes that take place in the cells of organisms to convert biochemical energy from nutrients into adenosine triphosphate , and then release waste products. The reactions involved in respiration are catabolic reactions that involve...
, return the organic carbon to dissolved carbon dioxide
Carbon dioxide
Carbon dioxide is a naturally occurring chemical compound composed of two oxygen atoms covalently bonded to a single carbon atom...
. Calcium carbonate dissolves at a rate dependent upon local carbonate
Carbonate
In chemistry, a carbonate is a salt of carbonic acid, characterized by the presence of the carbonate ion, . The name may also mean an ester of carbonic acid, an organic compound containing the carbonate group C2....
chemistry. As these processes are generally slower than synthesis processes, and because the particulate material is sinking, the biological pump transports material from the surface of the ocean to its depths.

As the biological pump plays an important role in the Earth's carbon cycle, significant effort is spent quantifying its strength. However, because they occur as a result of poorly-constrained ecological interactions usually at depth, the processes that form the biological pump are difficult to measure. A common method is to estimate primary production fuelled by nitrate
Nitrate
The nitrate ion is a polyatomic ion with the molecular formula NO and a molecular mass of 62.0049 g/mol. It is the conjugate base of nitric acid, consisting of one central nitrogen atom surrounded by three identically-bonded oxygen atoms in a trigonal planar arrangement. The nitrate ion carries a...
and ammonium
Ammonium
The ammonium cation is a positively charged polyatomic cation with the chemical formula NH. It is formed by the protonation of ammonia...
as these nutrients have different sources that are related to the remineralisation of sinking material. From these it is possible to derive the so-called f-ratio
F-ratio
In oceanic biogeochemistry, the f-ratio is the fraction of total primary production fuelled by nitrate . This fraction is significant because it is assumed to be directly related to the sinking flux of organic marine snow from the surface ocean by the biological pump...
, a proxy for the local strength of the biological pump. Applying the results of local studies to the global scale are complicated by the role the ocean's circulation plays in different ocean regions.

Land-use changes, the combustion
Combustion
Combustion or burning is the sequence of exothermic chemical reactions between a fuel and an oxidant accompanied by the production of heat and conversion of chemical species. The release of heat can result in the production of light in the form of either glowing or a flame...
of fossil fuel
Fossil fuel
Fossil fuels are fuels formed by natural processes such as anaerobic decomposition of buried dead organisms. The age of the organisms and their resulting fossil fuels is typically millions of years, and sometimes exceeds 650 million years...
s, and the production of cement
Cement
In the most general sense of the word, a cement is a binder, a substance that sets and hardens independently, and can bind other materials together. The word "cement" traces to the Romans, who used the term opus caementicium to describe masonry resembling modern concrete that was made from crushed...
have led to a flux of CO2 to the atmosphere. Presently, about one third (approximately 2 Gt C y−1) of anthropogenic emissions of CO2 are believed to be entering the ocean. However, the biological pump is not believed to play a significant role in this flux. This is because the biological pump is primarily limited by the availability of light and nutrients, and not by carbon. This is in contrast to the situation on land, where elevated atmospheric concentrations of CO2 may increase primary production
Primary production
400px|thumb|Global oceanic and terrestrial photoautotroph abundance, from September [[1997]] to August 2000. As an estimate of autotroph biomass, it is only a rough indicator of primary production potential, and not an actual estimate of it...
because land plant
Plant
Plants are living organisms belonging to the kingdom Plantae. Precise definitions of the kingdom vary, but as the term is used here, plants include familiar organisms such as trees, flowers, herbs, bushes, grasses, vines, ferns, mosses, and green algae. The group is also called green plants or...
s are able to improve their water-use efficiency (= decrease transpiration
Transpiration
Transpiration is a process similar to evaporation. It is a part of the water cycle, and it is the loss of water vapor from parts of plants , especially in leaves but also in stems, flowers and roots. Leaf surfaces are dotted with openings which are collectively called stomata, and in most plants...
) when CO2 is easier to obtain. However, there are still considerable uncertainties in the marine carbon cycle, and some research suggests that a link between elevated CO2 and marine primary production exists.

However, climate change
Climate change
Climate change is a significant and lasting change in the statistical distribution of weather patterns over periods ranging from decades to millions of years. It may be a change in average weather conditions or the distribution of events around that average...
may affect the biological pump in the future by warming and stratifying
Stratification (water)
Water stratification occurs when water masses with different properties - salinity , oxygenation , density , temperature - form layers that act as barriers to water mixing...
the surface ocean. It is believed that this could decrease the supply of nutrients to the euphotic zone, reducing primary production there. Also, changes in the ecological success of calcifying organisms caused by ocean acidification
Ocean acidification
Ocean acidification is the name given to the ongoing decrease in the pH and increase in acidity of the Earth's oceans, caused by the uptake of anthropogenic carbon dioxide from the atmosphere....
may affect the biological pump by altering the strength of the hard tissues pump. This may then have a "knock-on" effect on the soft tissues pump because calcium carbonate acts to ballast sinking organic material.