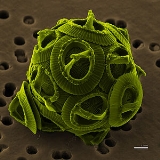 Encyclopedia
Coccolithophores are single-celled algae
Algae
Algae are a large and diverse group of simple, typically autotrophic organisms, ranging from unicellular to multicellular forms, such as the giant kelps that grow to 65 meters in length. They are photosynthetic like plants, and "simple" because their tissues are not organized into the many...
, protist
Protist
Protists are a diverse group of eukaryotic microorganisms. Historically, protists were treated as the kingdom Protista, which includes mostly unicellular organisms that do not fit into the other kingdoms, but this group is contested in modern taxonomy...
s, and phytoplankton
Phytoplankton
Phytoplankton are the autotrophic component of the plankton community. The name comes from the Greek words φυτόν , meaning "plant", and πλαγκτός , meaning "wanderer" or "drifter". Most phytoplankton are too small to be individually seen with the unaided eye...
belonging to the division of haptophyte
Haptophyte
The haptophytes, classified either as the Prymnesiophyta or Haptophyta, are a division of algae.The term "Haptophyceae" is sometimes used. This ending implies classification at a lower level...
s. They are distinguished by special calcium carbonate
Calcium carbonate
Calcium carbonate is a chemical compound with the formula CaCO3. It is a common substance found in rocks in all parts of the world, and is the main component of shells of marine organisms, snails, coal balls, pearls, and eggshells. Calcium carbonate is the active ingredient in agricultural lime,...
plates (or scales) of uncertain function called coccolith
Coccolith
Coccoliths are individual plates of calcium carbonate formed by coccolithophores which are arranged around them in a coccosphere.- Formation and composition :...
s (calcareous nanoplankton), which are important microfossils
Micropaleontology
Micropaleontology is the branch of paleontology that studies microfossils.-Microfossils:...
. Coccolithophores are almost exclusively marine
Marine (ocean)
Marine is an umbrella term. As an adjective it is usually applicable to things relating to the sea or ocean, such as marine biology, marine ecology and marine geology...
and are found in large numbers throughout the surface euphotic zone
Photic zone
The photic zone or euphotic zone is the depth of the water in a lake or ocean that is exposed to sufficient sunlight for photosynthesis to occur...
of the ocean
Ocean
An ocean is a major body of saline water, and a principal component of the hydrosphere. Approximately 71% of the Earth's surface is covered by ocean, a continuous body of water that is customarily divided into several principal oceans and smaller seas.More than half of this area is over 3,000...
. An example of a globally significant coccolithophore is Emiliania huxleyi
Emiliania huxleyi
Emiliania huxleyi, often abbreviated "EHUX", is a species of coccolithophore with a global distribution from the tropics to subarctic waters. It is one of thousands of different photosynthetic plankton that freely drift in the euphotic zone of the ocean, forming the basis of virtually all marine...
.

The arrangement of coccolithophores are as spherical cells about 5–100 micrometres across, enclosed by calcareous plates, coccoliths, about 2–25 micrometres across. Coccolithophores that are alive today have two brown pigment
Pigment
A pigment is a material that changes the color of reflected or transmitted light as the result of wavelength-selective absorption. This physical process differs from fluorescence, phosphorescence, and other forms of luminescence, in which a material emits light.Many materials selectively absorb...
chloroplasts in their cell with the nucleus located between them. The pigments are home to the chlorophyll which carry out photosynthesis
Photosynthesis
Photosynthesis is a chemical process that converts carbon dioxide into organic compounds, especially sugars, using the energy from sunlight. Photosynthesis occurs in plants, algae, and many species of bacteria, but not in archaea. Photosynthetic organisms are called photoautotrophs, since they can...
. In order to obtain the sunlight needed for photosynthesis, coccolithophores live near the surface of the ocean. Although they have the capability to swim, coccolithophores dominant mode of transport is drifting with ocean current and circulation patterns. However, they may maneuver individually to remain in the euphotic zone during times of extremely favorable conditions.

Due to their microscopic
Microscopy
Microscopy is the technical field of using microscopes to view samples and objects that cannot be seen with the unaided eye...
size and the broad distribution of many of their taxa, coccoliths have become very important as index fossil
Index fossil
Index fossils are fossils used to define and identify geologic periods . They work on the premise that, although different sediments may look different depending on the conditions under which they were laid down, they may include the remains of the same species of fossil...
s for solving various stratigraphic
Stratigraphy
Stratigraphy, a branch of geology, studies rock layers and layering . It is primarily used in the study of sedimentary and layered volcanic rocks....
problems. Microfossils are sensitive indicators of changes in the temperature and salinity
Salinity
Salinity is the saltiness or dissolved salt content of a body of water. It is a general term used to describe the levels of different salts such as sodium chloride, magnesium and calcium sulfates, and bicarbonates...
of the ocean and sea
Sea
A sea generally refers to a large body of salt water, but the term is used in other contexts as well. Most commonly, it means a large expanse of saline water connected with an ocean, and is commonly used as a synonym for ocean...
surface water. The quantitative analysis of calcareous
Calcite
Calcite is a carbonate mineral and the most stable polymorph of calcium carbonate . The other polymorphs are the minerals aragonite and vaterite. Aragonite will change to calcite at 380-470°C, and vaterite is even less stable.-Properties:...
nanoplankton assemblages is being employed to reveal such changes. They also produce alkenones, biomarkers of great utility in reconstructing ancient temperatures.

Coccolithophores have long been thought to respond to increased ocean acidity, caused by increasing
Carbon dioxide
Carbon dioxide is a naturally occurring chemical compound composed of two oxygen atoms covalently bonded to a single carbon atom...
levels, by becoming less calcified. In 2008, Iglesias-Rodriguez et al. were surprised to learn that in fact the opposite can happen in at least some circumstances, with the model species E. huxleyi
Emiliania huxleyi
Emiliania huxleyi, often abbreviated "EHUX", is a species of coccolithophore with a global distribution from the tropics to subarctic waters. It is one of thousands of different photosynthetic plankton that freely drift in the euphotic zone of the ocean, forming the basis of virtually all marine...
becoming 40% heavier and more abundant in waters of higher concentration.