Encyclopedia
Bilfinger Berger is a large, internationally active construction and services company based in Mannheim
Mannheim
Mannheim is a city in southwestern Germany. With about 315,000 inhabitants, Mannheim is the second-largest city in the Bundesland of Baden-Württemberg, following the capital city of Stuttgart....
, Germany
Germany
Germany , officially the Federal Republic of Germany , is a federal parliamentary republic in Europe. The country consists of 16 states while the capital and largest city is Berlin. Germany covers an area of 357,021 km2 and has a largely temperate seasonal climate...
.

Bilfinger Berger dates back to 1880 when August Bernatz founded an engineering business which became known, from 1886 as Bernatz & Grün and, from 1892, as Grün & Bilfinger.

In 1970 Grün & Bilfinger acquired a majority stake in Julius Berger-Bauboag AG, itself a merger of two companies, Julius Berger Tiefbau AG and Berlinische Boden-Gesellschaft AG, both founded in 1890. The combined business, fully integrated in 1975, took the name Bilfinger & Berger Bauaktiengesellschaft.

In 2001 the business changed its name to Bilfinger Berger AG. 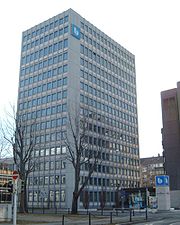 In October 2009 the Company acquired MCE Beteiligungsverwaltungs GmbH, a business based in Linz
Linz
Linz is the third-largest city of Austria and capital of the state of Upper Austria . It is located in the north centre of Austria, approximately south of the Czech border, on both sides of the river Danube. The population of the city is , and that of the Greater Linz conurbation is about...
focused on the design, construction and maintenance of facilities in the process industry and the energy sector.

In recent years Bilfinger Berger has shifted the focus of its activities toward the services business. In 2010, services contributed to 80% of the company’s total output volume of €8,123 million and EBIT for the services division amounted to €297 million.

Major projects have included the Ludendorff Bridge
Ludendorff Bridge
The Ludendorff Bridge was a railway bridge across the River Rhine in Germany, connecting the villages of Remagen and Erpel between two ridge lines of hills flanking the river...
at Remagen
Remagen
Remagen is a town in Germany in Rhineland-Palatinate, in the district of Ahrweiler. It is about a one hour drive from Cologne , just south of Bonn, the former West German capital. It is situated on the River Rhine. There is a ferry across the Rhine from Remagen every 10–15 minutes in the summer...
completed in 1919, the Busch Memorial Stadium
Busch Memorial Stadium
Busch Memorial Stadium, also known as Busch Stadium, was a multi-purpose sports facility in St. Louis, Missouri that operated from 1966 to 2005....
completed in 1966, the Munich Olympic Stadium
Olympic Stadium (Munich)
Olympiastadion is a stadium located in Munich, Germany. Situated at the heart of the Olympiapark München in northern Munich, the stadium was built as the main venue for the 1972 Summer Olympics....
completed in 1972, the Sydney Opera House
Sydney Opera House
The Sydney Opera House is a multi-venue performing arts centre in the Australian city of Sydney. It was conceived and largely built by Danish architect Jørn Utzon, finally opening in 1973 after a long gestation starting with his competition-winning design in 1957...
completed in 1973, the Dresdner Bank Tower completed in 1978, the Oymapinar Dam
Oymapinar Dam
Oymapinar Dam is an arch dam built on the Manavgat river in Turkey in 1984. It is an arch dam in design, 185 m in height, built to generate hydroelectric power.Oymapınar Dam is located 12 km north of Manavgat Waterfall...
in Turkey
Turkey
Turkey , known officially as the Republic of Turkey , is a Eurasian country located in Western Asia and in East Thrace in Southeastern Europe...
completed 1984, the Mỹ Thuận Bridge in Vietnam
Vietnam
Vietnam – sometimes spelled Viet Nam , officially the Socialist Republic of Vietnam – is the easternmost country on the Indochina Peninsula in Southeast Asia. It is bordered by China to the north, Laos to the northwest, Cambodia to the southwest, and the South China Sea –...
completed in 2000, the Puente Centenario over the Panama Canal
Panama Canal
The Panama Canal is a ship canal in Panama that joins the Atlantic Ocean and the Pacific Ocean and is a key conduit for international maritime trade. Built from 1904 to 1914, the canal has seen annual traffic rise from about 1,000 ships early on to 14,702 vessels measuring a total of 309.6...
completed in 2004, the Svinesund Bridge
Svinesund Bridge
The Svinesund Bridge is a through arch bridge crossing Iddefjord at Svinesund, and joining Sweden and Norway. Svinesund is a sound separating the Swedish municipality of Strömstad from the Norwegian municipality of Halden, and thus it is the border between Sweden and Norway in this region...
between Sweden
Sweden
Sweden , officially the Kingdom of Sweden , is a Nordic country on the Scandinavian Peninsula in Northern Europe. Sweden borders with Norway and Finland and is connected to Denmark by a bridge-tunnel across the Öresund....
and Norway
Norway
Norway , officially the Kingdom of Norway, is a Nordic unitary constitutional monarchy whose territory comprises the western portion of the Scandinavian Peninsula, Jan Mayen, and the Arctic archipelago of Svalbard and Bouvet Island. Norway has a total area of and a population of about 4.9 million...
completed in 2005 and the Golden Ears Bridge
Golden Ears Bridge
The Golden Ears Bridge is a six-lane extradosed bridge in Metro Vancouver, British Columbia. It spans the Fraser River, connecting Langley on the south side with Pitt Meadows and Maple Ridge on the north side. The All Electronic Toll bridge, owned by TransLink, has a clearance of , and a total...
near Vancouver
Vancouver
Vancouver is a coastal seaport city on the mainland of British Columbia, Canada. It is the hub of Greater Vancouver, which, with over 2.3 million residents, is the third most populous metropolitan area in the country,...
in Canada
Canada
Canada is a North American country consisting of ten provinces and three territories. Located in the northern part of the continent, it extends from the Atlantic Ocean in the east to the Pacific Ocean in the west, and northward into the Arctic Ocean...
completed in June 2009.

The company is also working on the refurbishment of Sonnenstein Castle
Sonnenstein castle
The Sonnenstein castle is a castle in Pirna, near Dresden, Germany. It housed a mental hospital, which operated from 1811 to the end of World War II in 1945. During the War, it functioned as an extermination centre for the Third Reich Action T4 program...
due to be completed in 2012, the construction of a new Niederfinow North boat lift
Niederfinow boat lift
The Niederfinow boat lift is the oldest working boat lift in Germany. It lies on the Oder-Havel-Kanal near Niederfinow in Brandenburg. The lift overcomes a difference in elevation of 36 metres.- History :...
due to be completed in 2012 and the Gotthard Base Tunnel
Gotthard Base Tunnel
The Gotthard Base Tunnel is a new railway tunnel beneath the Swiss Alps, expected to open in 2016. With a route length of and a total of of tunnels, shafts and passages, it is the world's longest rail tunnel, surpassing the Japanese Seikan Tunnel....
due to be completed in 2015.

The company is also part of a consortium responsible for the construction and design of the currently halted Edinburgh Tram Project now expected to be completed in 2014.