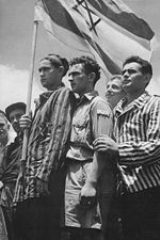 Encyclopedia
Bricha was the underground organized effort that helped Jewish Holocaus
The Holocaust
The Holocaust , also known as the Shoah , was the genocide of approximately six million European Jews and millions of others during World War II, a programme of systematic state-sponsored murder by Nazi...
t survivors escape post-World War II Europe to the British Mandate for Palestine in violation of the White Paper of 1939
White Paper of 1939
The White Paper of 1939, also known as the MacDonald White Paper after Malcolm MacDonald, the British Colonial Secretary who presided over it, was a policy paper issued by the British government under Neville Chamberlain in which the idea of partitioning the Mandate for Palestine, as recommended in...
. It ended when Israel declared independence and annulled the White Paper. 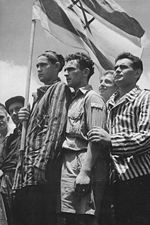 The movement of Jewish refugees
Displaced person
A displaced person is a person who has been forced to leave his or her native place, a phenomenon known as forced migration.- Origin of term :...
from the Displaced Persons camp
Displaced persons camp
A displaced persons camp or DP camp is a temporary facility for displaced persons coerced into forced migration. The term is mainly used for camps established after World War II in West Germany and in Austria, as well as in the United Kingdom, primarily for refugees from Eastern Europe and for the...
in which they were held (one million persons classified as "not repatrifiable" remained in Germany
Germany
Germany , officially the Federal Republic of Germany , is a federal parliamentary republic in Europe. The country consists of 16 states while the capital and largest city is Berlin. Germany covers an area of 357,021 km2 and has a largely temperate seasonal climate...
and Austria
Austria
Austria , officially the Republic of Austria , is a landlocked country of roughly 8.4 million people in Central Europe. It is bordered by the Czech Republic and Germany to the north, Slovakia and Hungary to the east, Slovenia and Italy to the south, and Switzerland and Liechtenstein to the...
) to Palestine was illegal on both sides, as Jews were not officially allowed to leave the countries of Central and Eastern Europe by the Soviet Union
Soviet Union
The Soviet Union , officially the Union of Soviet Socialist Republics , was a constitutionally socialist state that existed in Eurasia between 1922 and 1991....
and its allies, nor were they permitted to settle in Palestine by the British.

In late 1944 and early 1945, Jewish members of the Polish resistance met up with Warsaw ghetto
Warsaw Ghetto
The Warsaw Ghetto was the largest of all Jewish Ghettos in Nazi-occupied Europe during World War II. It was established in the Polish capital between October and November 15, 1940, in the territory of General Government of the German-occupied Poland, with over 400,000 Jews from the vicinity...
fighters in Lubin
Lubin
Lubin is a town in Lower Silesian Voivodeship in south-western Poland. From 1975–1998 it belonged to the former Legnica Voivodeship. Lubin is the administrative seat of Lubin County, and also of the rural district called Gmina Lubin, although it is not part of the territory of the latter,...
to form Bricha as a way of escaping the anti-Semitism
Anti-Semitism
Antisemitism is suspicion of, hatred toward, or discrimination against Jews for reasons connected to their Jewish heritage. According to a 2005 U.S...
of Europe, where they were convinced that another Holocaust would occur. After the liberation of Rivne
Rivne
Rivne or Rovno is a historic city in western Ukraine. It is the administrative center of the Rivne Oblast , as well as the administrative center of the surrounding Rivne Raion within the oblast...
, Eliezer and Abraham Lidovsky, and Pasha (Isaac) Rajchmann, concluded that there was no future for Jews in Poland
Poland
Poland , officially the Republic of Poland , is a country in Central Europe bordered by Germany to the west; the Czech Republic and Slovakia to the south; Ukraine, Belarus and Lithuania to the east; and the Baltic Sea and Kaliningrad Oblast, a Russian exclave, to the north...
. They formed an artisan guild to cover their covert activities, and they sent a group to Cernăuţi, Romania
Romania
Romania is a country located at the crossroads of Central and Southeastern Europe, on the Lower Danube, within and outside the Carpathian arch, bordering on the Black Sea...
to seek out escape routes. It was only after Abba Kovner
Abba Kovner
Abba Kovner was a Lithuanian Jewish Hebrew poet, writer, and partisan leader. He became one of the great poets of modern Israel. He was a cousin of the Israeli Communist Party leader Meir Vilner.-Biography:...
, and his group from Vilna joined, along with Yitzhak (Antek) Zuckerman, who had headed the Jewish Combat Organization of the Polish uprising of August, 1944, in January 1945, that the organization took shape. They soon joined up with a similar effort led by the Jewish Brigade
Jewish Brigade
The Jewish Infantry Brigade Group was a military formation of the British Army that served in Europe during the Second World War. The brigade was formed in late 1944, and its personnel fought the Germans in Italy...
and eventually the Haganah
Haganah
Haganah was a Jewish paramilitary organization in what was then the British Mandate of Palestine from 1920 to 1948, which later became the core of the Israel Defense Forces.- Origins :...
.

Officers of the Jewish Brigade of the British army assumed control of the operation, along with operatives from the Hagana (the Jewish clandestine army in Palestine) who hoped to smuggle as many displaced persons as possible into Palestine through Italy. The American Jewish Joint Distribution Committee funded the operation.

Almost immediately, the explicitly Zionist Berihah became the main conduit for Jews coming to Palestine, especially from the displaced person camps, and it initially had to turn people away due to too much demand.

After the Kielce pogrom
Kielce pogrom
The Kielce pogrom was an outbreak of violence against the Jewish community in the city of Kielce, Poland on July 4, 1946, perpetrated by a mob of local townsfolk and members of the official government forces of the People's Republic of Poland...
of 1946, the flight of Jews accelerated, with 100,000 Jews leaving Eastern Europe in three months. Operating in Poland
Poland
Poland , officially the Republic of Poland , is a country in Central Europe bordered by Germany to the west; the Czech Republic and Slovakia to the south; Ukraine, Belarus and Lithuania to the east; and the Baltic Sea and Kaliningrad Oblast, a Russian exclave, to the north...
, Romania
Romania
Romania is a country located at the crossroads of Central and Southeastern Europe, on the Lower Danube, within and outside the Carpathian arch, bordering on the Black Sea...
, Hungary
Hungary
Hungary , officially the Republic of Hungary , is a landlocked country in Central Europe. It is situated in the Carpathian Basin and is bordered by Slovakia to the north, Ukraine and Romania to the east, Serbia and Croatia to the south, Slovenia to the southwest and Austria to the west. The...
, Czechoslovakia
Czechoslovakia
Czechoslovakia or Czecho-Slovakia was a sovereign state in Central Europe which existed from October 1918, when it declared its independence from the Austro-Hungarian Empire, until 1992...
, and Yugoslavia
Yugoslavia
Yugoslavia refers to three political entities that existed successively on the western part of the Balkans during most of the 20th century....
through 1948, Berihah transferred approximately 250,000 survivors into Austria, Germany, and Italy
Italy
Italy , officially the Italian Republic languages]] under the European Charter for Regional or Minority Languages. In each of these, Italy's official name is as follows:;;;;;;;;), is a unitary parliamentary republic in South-Central Europe. To the north it borders France, Switzerland, Austria and...
through elaborate smuggling networks. Using ships supplied at great cost by the Mossad Le'aliyah Bet
Mossad Le'aliyah Bet
The Mossad LeAliyah Bet was a branch of the Haganah in the British Mandate of Palestine that operated to facilitate Jewish immigration to Palestine in violation of unilateral British restrictions. It operated from 1938 until the founding of the State of Israel in 1948...
, then the immigration arm of the Yishuv
Yishuv
The Yishuv or Ha-Yishuv is the term referring to the body of Jewish residents in Palestine before the establishment of the State of Israel...
, these refugees were then smuggled through the British cordon around Palestine.Bricha was part of the larger operation known as Aliyah Bet, and ended with the establishment of Israel
Israel
The State of Israel is a parliamentary republic located in the Middle East, along the eastern shore of the Mediterranean Sea...
, after which immigration to the Jewish state was legal, although emigration was still sometimes prohibited, as happened in both the Eastern Bloc and Arab countries, see, for example refusenik
Refusenik (Soviet Union)
Refusenik was an unofficial term for individuals, typically but not exclusively, Soviet Jews, who were denied permission to emigrate abroad by the authorities of the former Soviet Union and other countries of the Eastern bloc...
.