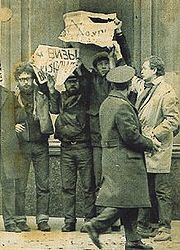 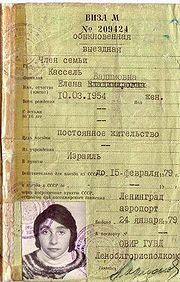 Refusenik was an unofficial term for individuals, typically but not exclusively, Soviet Jews, who were denied permission to emigrate abroad by the authorities of the former Soviet Union
Soviet Union
The Soviet Union , officially the Union of Soviet Socialist Republics , was a constitutionally socialist state that existed in Eurasia between 1922 and 1991....
and other countries of the Eastern bloc
Eastern bloc
The term Eastern Bloc or Communist Bloc refers to the former communist states of Eastern and Central Europe, generally the Soviet Union and the countries of the Warsaw Pact...
. The term refusenik is derived from the "refusal" handed down to a prospective emigrant from the Soviet authorities.

Over time, "refusenik" has entered colloquial English usage for any type of protester.

A large number of Soviet Jews applied for exit visas to leave the Soviet Union, especially in the period following the 1967 Six-Day War
Six-Day War
The Six-Day War , also known as the June War, 1967 Arab-Israeli War, or Third Arab-Israeli War, was fought between June 5 and 10, 1967, by Israel and the neighboring states of Egypt , Jordan, and Syria...
. While some were allowed to leave, many were refused permission to emigrate, either immediately or after their cases would languish for years in the OVIR (ОВиР, "Отдел Виз и Регистрации", "Otdel Viz i Registratsii", English: Office of Visas and Registration), the MVD department responsible for exit visas. In many instances, the reason given for denial was that these persons had been given access, at some point in their careers, to information vital to Soviet national security
National security
National security is the requirement to maintain the survival of the state through the use of economic, diplomacy, power projection and political power. The concept developed mostly in the United States of America after World War II...
and could not now be allowed to leave.

During the Cold War
Cold War
The Cold War was the continuing state from roughly 1946 to 1991 of political conflict, military tension, proxy wars, and economic competition between the Communist World—primarily the Soviet Union and its satellite states and allies—and the powers of the Western world, primarily the United States...
, Soviet Jews were thought to be a security liability or possible traitors. To apply for an exit visa, the applicants (and often their entire families) would have to quit their jobs, which in turn would make them vulnerable to charges of social parasitism
Parasitism (social offense)
Social parasitism is a charge that is leveled against a group or class in society which is considered to be detrimental to the whole by analogy with biologic parasitism .-General concept:...
, a criminal offense.

Many Jews encountered institutional antisemitism which blocked their opportunities for advancement. Some government sectors were almost entirely off-limits to Jews. In addition, Soviet restrictions on religious education and expression prevented Jews from engaging in Jewish cultural and religious life. While these restrictions led many Jews to seek emigration, requesting an exit visa was itself seen as an act of betrayal by Soviet authorities. Thus, prospective emigrants requested permission to emigrate at great personal risk, knowing that an official refusal would often be accompanied by dismissal from work and other forms of social ostracism and economic pressure.

A leading proponent and spokesman of the refusenik movement during the 1970s was Natan Sharansky
Natan Sharansky
Natan Sharansky was born in Stalino, Soviet Union on 20 January 1948 to a Jewish family. He graduated with a degree in applied mathematics from Moscow Institute of Physics and Technology. As a child, he was a chess prodigy. He performed in simultaneous and blindfold displays, usually against...
. Sharansky's involvement with the Moscow Helsinki Monitoring Group helped to establish the struggle for emigration rights within the greater context of the human rights movement in the USSR. His arrest on charges of espionage and treason, and subsequent trial contributed to international support for the refusenik cause.

Refuseniks included Jews who desired to emigrate on religious grounds, Jews seeking to immigrate to Israel for Zionist
Zionism
Zionism is a Jewish political movement that, in its broadest sense, has supported the self-determination of the Jewish people in a sovereign Jewish national homeland. Since the establishment of the State of Israel, the Zionist movement continues primarily to advocate on behalf of the Jewish state...
aspirations, and relatively secular Jews desiring to escape continuous state-sponsored antisemitism. Also, large numbers of other ethnic groups tried to escape persecutions or desired to seek a better life, including Volga German
Volga German
The Volga Germans were ethnic Germans living along the River Volga in the region of southern European Russia around Saratov and to the south. Recruited as immigrants to Russia in the 18th century, they were allowed to maintain German culture, language, traditions and churches: Lutherans, Reformed,...
s attempting to leave for Germany
Germany
Germany , officially the Federal Republic of Germany , is a federal parliamentary republic in Europe. The country consists of 16 states while the capital and largest city is Berlin. Germany covers an area of 357,021 km2 and has a largely temperate seasonal climate...
and Armenians
Armenians
Armenian people or Armenians are a nation and ethnic group native to the Armenian Highland.The largest concentration is in Armenia having a nearly-homogeneous population with 97.9% or 3,145,354 being ethnic Armenian....
wanting to join their diaspora
Diaspora
A diaspora is "the movement, migration, or scattering of people away from an established or ancestral homeland" or "people dispersed by whatever cause to more than one location", or "people settled far from their ancestral homelands".The word has come to refer to historical mass-dispersions of...
.