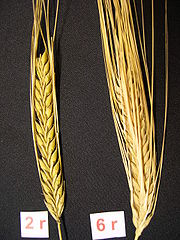 Bere, pronounced "bear," is a six-row barley
Barley
Barley is a major cereal grain, a member of the grass family. It serves as a major animal fodder, as a base malt for beer and certain distilled beverages, and as a component of various health foods...
currently cultivated mainly on 5-15 hectares of land in Orkney, Scotland
Scotland
Scotland is a country that is part of the United Kingdom. Occupying the northern third of the island of Great Britain, it shares a border with England to the south and is bounded by the North Sea to the east, the Atlantic Ocean to the north and west, and the North Channel and Irish Sea to the...
. It is also grown on Shetland, Caithness
Caithness
Caithness is a registration county, lieutenancy area and historic local government area of Scotland. The name was used also for the earldom of Caithness and the Caithness constituency of the Parliament of the United Kingdom . Boundaries are not identical in all contexts, but the Caithness area is...
and on a very small scale by a few crofters on some of the Western Isles, i.e. North Uist
North Uist
North Uist is an island and community in the Outer Hebrides of Scotland.-Geography:North Uist is the tenth largest Scottish island and the thirteenth largest island surrounding Great Britain. It has an area of , slightly smaller than South Uist. North Uist is connected by causeways to Benbecula...
, Benbecula
Benbecula
Benbecula is an island of the Outer Hebrides in the Atlantic Ocean off the west coast of Scotland. In the 2001 census it had a usually resident population of 1,249, with a sizable percentage of Roman Catholics. It forms part of the area administered by Comhairle nan Eilean Siar or the Western...
, South Uist
South Uist
South Uist is an island of the Outer Hebrides in Scotland. In the 2001 census it had a usually resident population of 1,818. There is a nature reserve and a number of sites of archaeological interest, including the only location in Great Britain where prehistoric mummies have been found. The...
and Barra
Barra
The island of Barra is a predominantly Gaelic-speaking island, and apart from the adjacent island of Vatersay, to which it is connected by a causeway, is the southernmost inhabited island of the Outer Hebrides in Scotland.-Geography:The 2001 census showed that the resident population was 1,078...
. It is probably Britain's oldest cereal
Cereal
Cereals are grasses cultivated for the edible components of their grain , composed of the endosperm, germ, and bran...
in continuous commercial cultivation.

Bere is a landrace
Landrace
A landrace is a local variety of a domesticated animal or plant species which has developed largely by natural processes, by adaptation to the natural and cultural environment in which it lives. It differs from a formal breed which has been bred deliberately to conform to a particular standard...
adapted to growing on soils of a low pH
PH
In chemistry, pH is a measure of the acidity or basicity of an aqueous solution. Pure water is said to be neutral, with a pH close to 7.0 at . Solutions with a pH less than 7 are said to be acidic and solutions with a pH greater than 7 are basic or alkaline...
and to a short growing season with long hours of daylight. It is sown in the spring and harvested in the summer. Because of its very rapid growth rate it is sown late but is often the first crop to be harvested. It is known locally as "the 90-day barley."

Bere is a very old grain that may have been brought to Britain by Vikings in the 9th century or even from an earlier wave of settlement. In its early days it was also called "bygge" or "big," probably originating from bygg, the Old Norse
Old Norse
Old Norse is a North Germanic language that was spoken by inhabitants of Scandinavia and inhabitants of their overseas settlements during the Viking Age, until about 1300....
term for barley. It became well-adapted to the far north of Britain as successive generations of farmers grew it, selecting each year's seeds from the best plants of the previous year.

In the 19th and early 20th centuries, bere was an important crop in the Highlands and Islands
Highlands and Islands
The Highlands and Islands of Scotland are broadly the Scottish Highlands plus Orkney, Shetland and the Hebrides.The Highlands and Islands are sometimes defined as the area to which the Crofters' Act of 1886 applied...
region of Scotland, providing grain for milling
Gristmill
The terms gristmill or grist mill can refer either to a building in which grain is ground into flour, or to the grinding mechanism itself.- Early history :...
and malting and straw for thatching
Thatching
Thatching is the craft of building a roof with dry vegetation such as straw, water reed, sedge , rushes, or heather, layering the vegetation so as to shed water away from the inner roof. It is a very old roofing method and has been used in both tropical and temperate climates...
and animal bedding. It was also exported from Orkney and other ports in Scotland to Northern Europe
Northern Europe
Northern Europe is the northern part or region of Europe. Northern Europe typically refers to the seven countries in the northern part of the European subcontinent which includes Denmark, Estonia, Latvia, Lithuania, Norway, Finland and Sweden...
. The advent of higher-yieding barley varieties led to a deep decline in bere growing during the 19th and 20th centuries. It survives in cultivation today thanks to Barony Mills, a 19th century watermill
Watermill
A watermill is a structure that uses a water wheel or turbine to drive a mechanical process such as flour, lumber or textile production, or metal shaping .- History :...
, which purchases the grain to produce beremeal which is used locally in bread
Bread
Bread is a staple food prepared by cooking a dough of flour and water and often additional ingredients. Doughs are usually baked, but in some cuisines breads are steamed , fried , or baked on an unoiled frying pan . It may be leavened or unleavened...
, biscuit
Biscuit
A biscuit is a baked, edible, and commonly flour-based product. The term is used to apply to two distinctly different products in North America and the Commonwealth Nations....
s, and the traditional beremeal bannock
Bannock (food)
Bannock is a variety of flat quick bread. The word can also be applied to any large, round article baked or cooked from grain. When a round bannock is cut into wedges, the wedges are often called scones. But in Scotland, the words bannock and scone are often used interchangeably.-Scottish:"Bannock"...
.

The Agronomy Institute at Orkney College UHI
Orkney College
Orkney College is a further and higher education college in Orkney, an archipelago in northern Scotland. It is an academic partner in the University of the Highlands and Islands....
in Scotland has had a research program on Bere since 2002. The program is aimed at developing new markets for the crop and developing best practices for growing it more easily and with increased yield. As a result of this research, several new markets (whisky, beer and biscuits) have been developed for Orkney Bere. The crop is also being grown on the island of Islay
Islay
-Prehistory:The earliest settlers on Islay were nomadic hunter-gatherers who arrived during the Mesolithic period after the retreat of the Pleistocene ice caps. In 1993 a flint arrowhead was found in a field near Bridgend dating from 10,800 BC, the earliest evidence of a human presence found so far...
, for whisky production.

Bere has a long history of use in making alcoholic beverages. Historical accounts from the 15th century onward show that Orkney produced large amounts of malt and beer, most of it probably from bere. An ancient tradition of making bere-based homebrew
Homebrewing
Homebrewing is the brewing of beer, wine, sake, mead, cider, perry and other beverages through fermentation on a small scale as a hobby for personal consumption, free distribution at social gatherings, amateur brewing competitions or other non-commercial reasons...
survives until this day on the island. During the 19th century, the Campbeltown
Campbeltown
Campbeltown is a town and former royal burgh in Argyll and Bute, Scotland. It lies by Campbeltown Loch on the Kintyre peninsula. Originally known as Kinlochkilkerran , it was renamed in the 17th century as Campbell's Town after Archibald Campbell was granted the site in 1667...
distilleries used large quantities of bere in making Scotch whisky
Scotch whisky
Scotch whisky is whisky made in Scotland.Scotch whisky is divided into five distinct categories: Single Malt Scotch Whisky, Single Grain Scotch Whisky, Blended Malt Scotch Whisky , Blended Grain Scotch Whisky, and Blended Scotch Whisky.All Scotch whisky must be aged in oak barrels for at least three...
. In the early 21st century some distillers began experimenting again with bere, and in 2006, the UK's most northern brewery released a bere-based microbrew.

Originally bere or beir or bear was a generic Lowland Scots
Scots language
Scots is the Germanic language variety spoken in Lowland Scotland and parts of Ulster . It is sometimes called Lowland Scots to distinguish it from Scottish Gaelic, the Celtic language variety spoken in most of the western Highlands and in the Hebrides.Since there are no universally accepted...
word for barley
Barley
Barley is a major cereal grain, a member of the grass family. It serves as a major animal fodder, as a base malt for beer and certain distilled beverages, and as a component of various health foods...
of any kind, and was used throughout the country. Now it is used mainly in the north of Scotland. It often referred to barley of a lower yield, and the phrase "bear meal marriage" usually meant one that would not bring much wealth with it. Talking of the wide variety of crops in England
England
England is a country that is part of the United Kingdom. It shares land borders with Scotland to the north and Wales to the west; the Irish Sea is to the north west, the Celtic Sea to the south west, with the North Sea to the east and the English Channel to the south separating it from continental...
, and crop rotation, Professor T.C. Smout
Christopher Smout
Thomas Christopher Smout CBE, FBA, FRSE, is a Scottish academic, historian, author and Historiographer Royal in Scotland.-Career:Smout taught at the University of Edinburgh, from 1959 until 1980...
writes: "In Scotland, there is no evidence of such variation possibly because the range of crops was so much smaller — often only oats or bear (a primitive form of barley)".