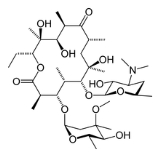 Overview
Erythromycin is a macrolide
Macrolide
The macrolides are a group of drugs whose activity stems from the presence of a macrolide ring, a large macrocyclic lactone ring to which one or more deoxy sugars, usually cladinose and desosamine, may be attached. The lactone rings are usually 14-, 15-, or 16-membered...
antibiotic
Antibiotic
An antibacterial is a compound or substance that kills or slows down the growth of bacteria.The term is often used synonymously with the term antibiotic; today, however, with increased knowledge of the causative agents of various infectious diseases, antibiotic has come to denote a broader range of...
that has an antimicrobial spectrum similar to or slightly wider than that of penicillin
Penicillin
Penicillin is a group of antibiotics derived from Penicillium fungi. They include penicillin G, procaine penicillin, benzathine penicillin, and penicillin V....
, and is often used for people who have an allergy
Allergy
An Allergy is a hypersensitivity disorder of the immune system. Allergic reactions occur when a person's immune system reacts to normally harmless substances in the environment. A substance that causes a reaction is called an allergen. These reactions are acquired, predictable, and rapid...
to penicillins. For respiratory tract infections, it has better coverage of atypical organisms, including mycoplasma
Mycoplasma
Mycoplasma refers to a genus of bacteria that lack a cell wall. Without a cell wall, they are unaffected by many common antibiotics such as penicillin or other beta-lactam antibiotics that target cell wall synthesis. They can be parasitic or saprotrophic. Several species are pathogenic in humans,...
and Legionellosis
Legionellosis
Legionellosis is a potentially fatal infectious disease caused by gram negative, aerobic bacteria belonging to the genus Legionella. Over 90% of legionellosis cases are caused by Legionella pneumophila, a ubiquitous aquatic organism that thrives in temperatures between , with an optimum temperature...
. It was first marketed by Eli Lilly and Company
Eli Lilly and Company
Eli Lilly and Company is a global pharmaceutical company. Eli Lilly's global headquarters is located in Indianapolis, Indiana, in the United States...
, and it is today commonly known as EES (erythromycin ethylsuccinate, an ester prodrug
Prodrug
A prodrug is a pharmacological substance administered in an inactive form. Once administered, the prodrug is metabolised in vivo into an active metabolite, a process termed bioactivation. The rationale behind the use of a prodrug is generally for absorption, distribution, metabolism, and...
that is commonly administered).

In structure, this macrocyclic compound contains a 14-membered lactone
Lactone
In chemistry, a lactone is a cyclic ester which can be seen as the condensation product of an alcohol group -OH and a carboxylic acid group -COOH in the same molecule...
ring with ten asymmetric centers and two sugars (L-cladinose
Cladinose
Cladinose is a hexose deoxy sugar that in several antibiotics is attached to the macrolide ring.In ketolides, a relatively new class of antibiotics, the cladinose is replaced with a keto group.-External links:* *...
and D-desosamine
Desosamine
Desosamine is a 3--3,4,6-trideoxyhexose found in certain macrolide antibiotics such as the commonly prescribed erythromycin.-Biosynthesis:Six enzymes are required for its biosynthesis from TDP-glucose in Streptomyces venezuelae....
), making it a compound very difficult to produce via synthetic methods.

The inhibition process in detail the site/target of erythromysin
More