Encyclopedia
The Belle Vue Aces are a British speedway
Motorcycle speedway
Motorcycle speedway, usually referred to as speedway, is a motorcycle sport involving four and sometimes up to six riders competing over four anti-clockwise laps of an oval circuit. Speedway motorcycles use only one gear and have no brakes and racing takes place on a flat oval track usually...
team from Manchester
Manchester
Manchester is a city and metropolitan borough in Greater Manchester, England. According to the Office for National Statistics, the 2010 mid-year population estimate for Manchester was 498,800. Manchester lies within one of the UK's largest metropolitan areas, the metropolitan county of Greater...
in the north west of England
England
England is a country that is part of the United Kingdom. It shares land borders with Scotland to the north and Wales to the west; the Irish Sea is to the north west, the Celtic Sea to the south west, with the North Sea to the east and the English Channel to the south separating it from continental...
.

Racing first took place in 1928 at the Belle Vue greyhound stadium in Kirkmanshulme Lane before moving the following year to a specially built stadium
Hyde Road (speedway)
Hyde Road Stadium was the home of the Belle Vue Aces speedway team. The stadium's` capacity was 40,000 and it was built in 1928 and used until demolished in 1987. It was claimed to have been the first purpose built speedway track in Britain....
nearby on Hyde Road. The club raced there until 1987 when the stadium was demolished. The club moved to a new track at its original home and remains there to this day.

Hyde Road
Hyde Road (speedway)
Hyde Road Stadium was the home of the Belle Vue Aces speedway team. The stadium's` capacity was 40,000 and it was built in 1928 and used until demolished in 1987. It was claimed to have been the first purpose built speedway track in Britain....
had a 40,000 capacity, and was built around an existing athletics and cycling track. It is alleged that Britain’s first open grass-track event took place here on 25 February 1928. Later, with the grass gone, it was claimed to be the first purpose built speedway track in Britain. The opening speedway meeting here was staged on 23 March 1929, when Arthur Franklyn won the Golden Helmet.

Belle Vue resigned from league racing (English Dirt Track League) in 1929, stating that it wasn’t popular enough. In 1930 they were leading members of the uncompleted Northern League. In 1931 Belle Vue reserves took over Harringay’s
Harringay Racers (speedway)
The Harringay Racers were a motorcycle speedway team who raced at the Harringay Stadium from 1947 until 1954 in the National League Division One....
fixtures, after they had withdrawn from the Southern League. This meant the Aces had a team in both the Northern and Southern Leagues although they were often referred to as Manchester in the Southern League.

Belle Vue was the only track to continue operating throughout the Second World War, running a total of 176 meetings during the war years, which were attended by a total of 2,816,000 people. The winners of the wartime British Individual Championships were:
After the war, team racing resumed, with the Aces taking their place in the 1946 National League
1946 Speedway National League
The 1946 National League Division One was the eighth season of the highest tier of motorcycle speedway in Great Britain and the first post-war season. Wembley Lions won their second title.-Final table:...
, and subsequently Division One the following year. There was sadness on 13 September 1947 however, when manager E.O. Spence died. Johnnie Hoskins
Johnnie Hoskins
Johnnie S. Hoskins MBE is the man who is considered to have 'invented' motorcycle speedway. If it cannot be established he invented the sport, he certainly played the largest role in promoting the sport in the United Kingdom.-Early life:He left school at thirteen and worked on a farm and then as...
took over from Alice Hart as promoter in 1953.

With so few tracks running, the Aces found themselves in the 11 team National League in 1957. A change in promoter occurred in 1960 with Ken Sharples taking charge. Harold Jackson took over as Speedway Manager in 1964, prior to the Aces becoming founder members of the British League
Speedway British League
The British League was the top division of Speedway in the United Kingdom from 1965 until 1995 when it became known as the Premier League. Prior to 1965 the division had been known as the National League....
in 1965
1965 British Speedway League
The British Speedway League was formed in 1965 along with the British Speedway Promoters Association . It created a tier above the National League structure, and the 18 team League was founded.-Final table:...
. Dent Oliver
Dent Oliver
John Walter Denton Oliver was a former international speedway who qualified for the Speedway World Championship finals three times.-Career summary:...
became Speedway Manager in 1967, and remained in that position until 1973.

Frank Varey
Frank Varey
Frank Varey was a former international speedway rider who featured in the Speedway World Championship finals in 1937 and 1938...
took over as Speedway Manager in 1974, before Jack Fearnley took up the reins in 1974. In 1982, former World Stock-Car Champion Stuart Bamforth became promoter. The stadium was also used for Stock Car
Stock car racing
Stock car racing is a form of automobile racing found mainly in the United States, Canada, New Zealand, Great Britain, Brazil and Argentina. Traditionally, races are run on oval tracks measuring approximately in length...
racing right up to its closure in 1987.

Following the announcement that Bamforth had sold the stadium for redevelopment, the last speedway meeting was staged on 1 November 1987, when a double header took place. Firstly, Belle Vue defeated the Coventry Bees
Coventry Bees
The Coventry Bees are a motorcycle speedway team based at Brandon near Coventry, England. A Coventry team was first formed in 1928 and competed in the Southern League and then the National League in the pre-war era at Brandon stadium. There were also meetings at a stadium in Lythalls Lane...
in a replay of the League Cup before losing to the Cradley Heath Heathens
Cradley Heath Heathens
Cradley Heath Heathens are a defunct motorcycle speedway team from Dudley, England.-History:Cradley Heath speedway team was formed in 1947 and first raced at Dudley Wood Stadium on 21 June 1947 after a number of away appearances prior to the opening of the newly built stadium...
in the final league match ever raced at Hyde Road. 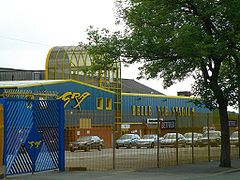 The greyhound
Greyhound racing
Greyhound racing is the sport of racing greyhounds. The dogs chase a lure on a track until they arrive at the finish line. The one that arrives first is the winner....
track at Belle Vue Stadium (Kirkmanshulme Lane) was the first to open in Britain when, on 24 July 1927, some 1,700 enthusiasts witnessed a dog called Mistley win the very first race. A grass-track meeting took place here on 5 May 1928, with Sid Jackson emerging as the winner. The dirt track was stated to be similar in size and shape to Wimbledon and Harringay, with the first meeting going ahead on 28 July 1928, when Frank Arthur won the Golden Helmet.

When the stadium at Hyde Road was sold in 1987, the Aces moved back to the Greyhound Stadium, under the promotion of Peter Collins
Peter Collins (speedway rider)
Peter Spencer Collins MBE is a former Speedway rider who spent his whole career with the Belle Vue Aces, the team he supported as a child...
, John Perrin and Don Bowes. The opening meeting of the new era of the Aces was held on 1 April 1988, and saw Belle Vue take on Bradford Dukes
Bradford Dukes
The Bradford Dukes were a British motorcycle speedway team which operated from the Odsal Stadium in Bradford from 1986 until their closure in 1997.-History:...
in the Frank Varey Northern Trophy. However, the match was abandoned after just two heats due to a waterlogged track (rain), with the Aces leading the match.

Due to other commitments, Peter Collins
Peter Collins (speedway rider)
Peter Spencer Collins MBE is a former Speedway rider who spent his whole career with the Belle Vue Aces, the team he supported as a child...
resigned from his promotional position in 1989, leaving Perrin and Bowes in charge of the Aces. With the amalgamation of the two leagues, Belle Vue became members of the British League Division One in 1991.

A further management change in 1994 saw George Carswell link with Perrin and Bowes as co-promoter. Both divisions of the British League joined together to form a 21 team Premier League in 1995, with the Aces becoming founder members.

A further promoting change in 1995 saw John Hall replace Don Bowes, to link up with Perrin and Carswell. The Premier League broke in two at the end of 1996, with the Aces becoming members of the new Elite League
Speedway Elite League
The Elite League is the top division of Speedway league competition in the United Kingdom and is governed by the Speedway Control Bureau , in conjunction with the British Speedway Promoters' Association . It is sponsored by Sky Sports...
, where they have remained up until the present day.

A change of promotion occurred in late 2004 as John Perrin sold the club to Workington
Workington Comets
Workington Comets is a speedway club based in Workington, Cumbria. Their track is at Derwent Park Stadium, which they share with Workington Town Rugby League Football Club.They compete in the Premier League...
Promoters Tony Mole and Ian Thomas. This was Thomas's second stint in charge of The Aces. A further change in ownership occurred in December 2006 as ex-captain Chris Morton
Chris Morton
Christopher John Morton MBE is a former motorcycle speedway rider. He rode bikes from a young age at the farm of Peter Collins' parents.-Brief career summary:...
along with David Gordon and Gordon Pairman bought the club from Tony Mole and Ian Thomas.

The 2006 team who finished 5th in the British Elite League, one point outside the 4th placed Playoff position.