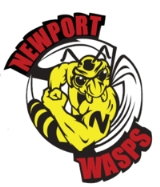 Encyclopedia
Newport Wasps are a British motorcycle speedway
Motorcycle speedway
Motorcycle speedway, usually referred to as speedway, is a motorcycle sport involving four and sometimes up to six riders competing over four anti-clockwise laps of an oval circuit. Speedway motorcycles use only one gear and have no brakes and racing takes place on a flat oval track usually...
team based in Newport
Newport
Newport is a city and unitary authority area in Wales. Standing on the banks of the River Usk, it is located about east of Cardiff and is the largest urban area within the historic county boundaries of Monmouthshire and the preserved county of Gwent...
, South Wales
South Wales
South Wales is an area of Wales bordered by England and the Bristol Channel to the east and south, and Mid Wales and West Wales to the north and west. The most densely populated region in the south-west of the United Kingdom, it is home to around 2.1 million people and includes the capital city of...
. They were the 1999 Conference League champions
Speedway Conference League
The Conference League was the third and lowest division of motorcycle speedway racing in the United Kingdom governed by the Speedway Control Board , in conjunction with the British Speedway Promoters' Association . The other leagues being the Elite League and Premier League. The League consisted of...
.

The Wasp logo incorporates the traditional black and amber colours of the City of Newport. The modern incarnation of the team was founded in 1997 but Newport Wasps competed in the top UK league between 1964 and 1976 based at the now-defunct Somerton Park
Somerton Park
Somerton Park was a football, greyhound and speedway stadium in Newport, Monmouthshire. In April 1912 Newport County had been accepted to play in the Southern League for the 1912–13 season. Shortly afterwards, the site for the ground was obtained by the Club's chairman Bert Moss...
stadium, Newport. The club closed after becoming the Bristol Bulldogs
Bristol Bulldogs
The Bristol Bulldogs were a British motorcycle speedway team based in the Knowle Stadium, Bristol, England.The club was formed prior to World War II. The track operated a season of challenge matches in 1946 with the team known as Ex-Bristol. They competed in the National League Division Two from 1947...
for one season in 1977. Stars of the former team included Australian Phil Crump
Phil Crump
Philip John "Phil" Crump in Mildura, Victoria is a retired Australian Motorcycle speedway rider who attained 3rd place in the 1976 World Championship...
, father of world champion Jason Crump
Jason Crump
Jason Phillip Crump is an Australian international motorcycle speedway rider. He is a three-time Speedway World Champion, a World Cup winner and a former World Under-21 Champion.-Family:...
. The Wasps withdrew from the Premier League
Speedway Premier League
The Premier League is the second division of Speedway in the United Kingdom and goverened by the Speedway Control Board , in conjunction with the British Speedway Promoters' Association . The Premier League was founded in 1995 when it replaced the British League as the first division...
in the early part of the 2008 season when their promoter, Tim Stone, died.