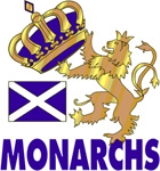 Encyclopedia
The Edinburgh Monarchs are a Scottish Speedway
Motorcycle speedway
Motorcycle speedway, usually referred to as speedway, is a motorcycle sport involving four and sometimes up to six riders competing over four anti-clockwise laps of an oval circuit. Speedway motorcycles use only one gear and have no brakes and racing takes place on a flat oval track usually...
team, currently based in Armadale
Armadale, West Lothian
Armadale is a town within the district of West Lothian in central Scotland.Armadale, formerly known as Barbauchlaw, is an ex-mining town which is also known for its brick manufacturing...
. They compete in the Speedway Premier League
Speedway Premier League
The Premier League is the second division of Speedway in the United Kingdom and goverened by the Speedway Control Board , in conjunction with the British Speedway Promoters' Association . The Premier League was founded in 1995 when it replaced the British League as the first division...
, racing on Friday nights during the Speedway season. The club is run by a Board of Directors, chaired by Alex Harkess. The team manager is Alan "Doc" Bridgett. The Monarchs are the current Premier League Champions.

The club was founded in 1928 and operated at Marine Gardens in Portobello
Portobello, Edinburgh
Portobello is a beach resort located three miles to the east of the city centre of Edinburgh, along the coast of the Firth of Forth, in Scotland. It is now a suburb of Edinburgh, with a promenade fronting on to the wide sand beach....
. They competed in the Northern League in 1930.
After the war, the potential of Old Meadowbank, then the home of Leith Athletic F.C., is supposed to have been spotted by Ian Hoskins. The Monarchs (Meadowbank Monarchs) were re-established in 1948 by a consortium including Frank Varey, ex rider and Sheffield promoter and R.L.Rae, a local Edinburgh businessman.
The team operated at Old Meadowbank 1948 in the National League Second Division until mid-way through to 1954. The team finished at the bottom of the league in 1948 but improved to a best place of third before closure in 1954.
Under the promotership of Ian Hoskins from 1960 until 1964 the Monarchs raced in the Provincial League and were founder members of the British League running from 1965 to 1967. The track was used for practice sessions between 1957 - 1959.

Old Meadowbank Stadium was purchased by the City of Edinburgh Council in 1956 from Leith Athletic. Following their successful bid to host the 1970 Commonwealth Games they decided to go ahead and redevelop the site of the stadium and the surrounding area. The Monarchs were then evicted as Speedway was not incorporated into the new stadium plans due to the government of the day refusing to fund stadiums which would be used by professional sports. The new Stadium sits immediately west of Old Meadowbank essentially on the site of the old running track known as New Meadowbank.
The team moved on bloc to a new track at Coatbridge near Glasgow and operated as the Coatbridge Monarchs 1968 - 1969 before the track licence was sold to Wembley.

Speedway returned to Edinburgh in 1977, with the Monarchs racing at Powderhall Stadium from 1977 until 1995. During the 1995 season, the company operating Powerhall Stadium fell into financial difficulty, and the stadium was sold to a housing company for redevelopment, meaning the Monarchs were once again evicted.

In 1996, Monarchs' rivals Glasgow Tigers closed down, so with a stadium not in use in Glasgow, and the Monarchs without a home in Edinburgh, the Monarchs' promotion moved their operation to Shawfield Stadium
Shawfield Stadium
Shawfield Stadium is a greyhound racing venue in the town of Rutherglen, South Lanarkshire, Scotland, located close to the boundary with Glasgow. It has also previously been a regular venue for football and speedway, as home to Clyde F.C. and the Glasgow Tigers respectively...
, Glasgow to form the Scottish Monarchs. Many Tigers fans refused to support their rival team, and although Monarchs fans initially travelled through to Glasgow, crowd numbers soon fell.

Recent plans for supermarket chain Sainsburys to redevelop Armadale Stadium fell through after their planning application was rejected.

Edinburgh secured another Premier League title in the 2010 season, their third title in seven years. The Championship was secured by winning away at Stoke's Loomer Road track, with Edinburgh riders Ryan Fisher and Kevin Wölbert going through the card unbeaten.