Bedford Square is a square in the Bloomsbury
Bloomsbury
-Places:* Bloomsbury is an area in central London.* Bloomsbury , related local government unit* Bloomsbury, New Jersey, New Jersey, USA* Bloomsbury , listed on the NRHP in Maryland...
district of the Borough of Camden
London Borough of Camden
In 1801, the civil parishes that form the modern borough were already developed and had a total population of 96,795. This continued to rise swiftly throughout the 19th century, as the district became built up; reaching 270,197 in the middle of the century...
in London
London
London is the capital city of :England and the :United Kingdom, the largest metropolitan area in the United Kingdom, and the largest urban zone in the European Union by most measures. Located on the River Thames, London has been a major settlement for two millennia, its history going back to its...
, England
England
England is a country that is part of the United Kingdom. It shares land borders with Scotland to the north and Wales to the west; the Irish Sea is to the north west, the Celtic Sea to the south west, with the North Sea to the east and the English Channel to the south separating it from continental...
.

Built between 1775 and 1783 as an upper middle class residential area, the sqare has had many distinguished residents, including Lord Eldon
John Scott, 1st Earl of Eldon
John Scott, 1st Earl of Eldon PC KC FRS FSA was a British barrister and politician. He served as Lord Chancellor of Great Britain between 1801 and 1806 and again between 1807 and 1827.- Background and education :...
, one of Britain's longest serving and most celebrated Lord Chancellor
Lord Chancellor
The Lord High Chancellor of Great Britain, or Lord Chancellor, is a senior and important functionary in the government of the United Kingdom. He is the second highest ranking of the Great Officers of State, ranking only after the Lord High Steward. The Lord Chancellor is appointed by the Sovereign...
s, who lived in the largest house in the square for many years. The square takes its name from the main title of the Russell family, the Dukes of Bedford, who were the main landlords in Bloomsbury.

Bedford Square is one of the best preserved set piece
Set piece
Set piece may refer to:* Set piece , an elaborate sequence which sees either a chase, fight, or other action taking place in an original and memorable way...
s of Georgian architecture
Georgian architecture
Georgian architecture is the name given in most English-speaking countries to the set of architectural styles current between 1720 and 1840. It is eponymous for the first four British monarchs of the House of Hanover—George I of Great Britain, George II of Great Britain, George III of the United...
in London, but most of the houses have now been converted into offices. Numbers 1-10, 11, 12–27, 28–38 and 40–54 are grade I listed buildings. The central garden remains private. Bedford College, the first place for female higher education in Britain, was formerly located in (and named after) Bedford Square. 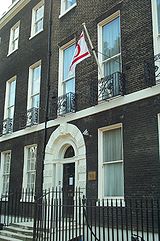 A number of houses have blue plaque
Blue plaque
A blue plaque is a permanent sign installed in a public place to commemorate a link between that location and a famous person or event, serving as a historical marker....
s recording famous residents: