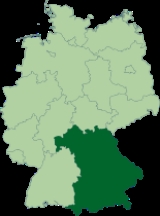 
The Under 15 Fußball-Bayernliga (German: C-Jugend Bayernliga) is the highest level of competition for under 15 football teams in Bavaria
Bavaria
Bavaria, formally the Free State of Bavaria is a state of Germany, located in the southeast of Germany. With an area of , it is the largest state by area, forming almost 20% of the total land area of Germany...
and the second tier of the Southern German league system, set below the Under 15 Regionalliga South.

To qualify for the championship, a club had win one of the seven Bezirksoberligas in Bavaria, the highest football leagues at this level and age.

The seven champions played a quarter final round with home-and-away games, whereby six clubs are drawn against each other for three games. The three winners plus the team that had a bye in this round reach the semi-finals, now played at a neutral ground. The two semi-finals winner enter the Bavarian championship final. Semi-final and final are held on the same weekend and location.

There is no national German championship at this level but an Under 15 Southern German championship exists since 1979, where the regional champions of Bavaria, Württemberg
Württemberg
Württemberg , formerly known as Wirtemberg or Wurtemberg, is an area and a former state in southwestern Germany, including parts of the regions Swabia and Franconia....
, North Baden
Baden
Baden is a historical state on the east bank of the Rhine in the southwest of Germany, now the western part of the Baden-Württemberg of Germany....
, South Baden and Hesse
Hesse
Hesse or Hessia is both a cultural region of Germany and the name of an individual German state.* The cultural region of Hesse includes both the State of Hesse and the area known as Rhenish Hesse in the neighbouring Rhineland-Palatinate state...
compete.

Below this level, at the under 13 (German: D-Jugend), no Bavarian championship exists. The under 15 level is currently, as of 2008, the highest level of play where clubs like FC Bayern Munich
FC Bayern Munich
FC Bayern Munich , is a German sports club based in Munich, Bavaria. It is best known for its professional football team, which is the most successful football club in Germany, having won 22 national titles and 15 cups....
and 1. FC Nuremberg still compete with their first teams at state level.

In 2008, the Bavarian football association had 2,630 registered under 15 teams, a marginal increase from the previous year. All up, 20,699 junior teams were registered with the BFV in 2008

Since 1994, a knock-out cup competition, the Bau Pokal, is also played.

In 2005, following the example of the under 19 and under 17 Bayernligas, two regional leagues, north and south, were formed. From then on, the two league winners would meet in the Bavarian final. The northern division operates with 14, the southern with 12 clubs. This difference results from the fact that the north has four Bezirksoberligas as the leagues below while the south only has three.

The bottom four clubs in the north and the bottom three clubs in the south are relegated while the seven Bezirksoberliga champions earn direct promotion. In 2008, there were five clubs promoted to the northern division due to SV Memmelsdorf
SV Memmelsdorf
The SV Memmelsdorf is a German association football club from the city of Memmelsdorf, Bavaria. The club played for a season in the Oberliga Bayern in 2009–10, having achieved promotion to this league for the first time.-History:...
withdrawing at the end of season.

In the 2006-07 season, FC Bayern Munich remained unbeaten throughout the league season, winning the Bavarian final, too, ending the season with 18 wins and five draws.

In the 2007-08 season, Bayern Munich remained unbeaten throughout the league season again, only losing the final to 1. FC Nuremberg. 1. FCN in turn only lost one regular season game, drew one and won all 24 others.

In October 2008, the Southern German football federation decided that, from 2010 onwards, an Under 15 Regionalliga South would be established, a step similar to what had been taken for the under 19 in 1996 and the under 17 in 2000. Regionalligas already exist in the two regions west and north and the south was concerned it would fall behind. After a lengthy debate, 86 of 131 delegates voted for the new league which will include five clubs from Bavaria, alongside clubs from Hesse
Hesse
Hesse or Hessia is both a cultural region of Germany and the name of an individual German state.* The cultural region of Hesse includes both the State of Hesse and the area known as Rhenish Hesse in the neighbouring Rhineland-Palatinate state...
and Baden-Württemberg
Baden-Württemberg
Baden-Württemberg is one of the 16 states of Germany. Baden-Württemberg is in the southwestern part of the country to the east of the Upper Rhine, and is the third largest in both area and population of Germany's sixteen states, with an area of and 10.7 million inhabitants...
. In this vote, the delegates from Baden-Württemberg, where a united Oberliga already exists since 2008, voted against while the other two regions plus the delegates from the professional clubs voted for the proposal. 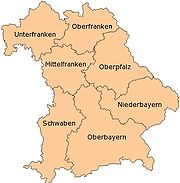 Below the Bayernliga
Bayernliga
Bayernliga is the title of several sports leagues in the German state of Bavaria. It can be translated as Bavarian league.-Football:* Fußball-Bayernliga: Highest football league in Bavaria....
, there is seven Bezirksoberligas, roughly organised within the boundaries of the seven Bavarian Regierungsbezirke, these being:

As of 2011, this is the standing in the all-time winners list:

The placings in the northern and southern division since 2005–06: