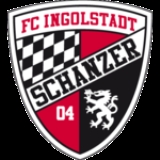 Encyclopedia
FC Ingolstadt 04 is a German football club based in Ingolstadt
Ingolstadt
Ingolstadt is a city in the Free State of Bavaria, in the Federal Republic of Germany. It is located along the banks of the Danube River, in the center of Bavaria. As at 31 March 2011, Ingolstadt had 125.407 residents...
, Bavaria
Bavaria
Bavaria, formally the Free State of Bavaria is a state of Germany, located in the southeast of Germany. With an area of , it is the largest state by area, forming almost 20% of the total land area of Germany...
. The club was founded in 2004 out of the merger of the football sides of two other clubs: ESV Ingolstadt and MTV Ingolstadt.

ESV Ingolstadt (Eisenbahner-Sportverein Ingolstadt-Ringsee e.V.) was founded in 1919 as FC Viktoria. Two years later the football players of Turnverein 1861 Ingolstadt joined the club to form VfR Ingolstadt. A number of other clubs from the Ringsee district fused with this club, but to little effect. The club's achievement amounted to not more than a couple of seasons spent in the Gauliga Bayern
Gauliga Bayern
The Gauliga Bayern was the highest football league in the German state of Bavaria from 1933 to 1945. Shortly after the formation of the league, the Nazis reorganised the administrative regions in Germany, and the five Gaue Bayreuth, Munich-Upper Bavaria, Swabia, Main Franconia and Franconia de...
in 1936–38. After World War II, the club was re-constituted as VfR Ingolstadt, changed its name to Erster Sportverein Ingolstadt (First Sports Club Ingolstadt) in 1951 and then changed it again to its current form in 1953 when "E" came to stand for Eisenbahner to reflect its affiliation with the railway.

ESV Ingolstadt joined the Regionalliga Süd (II) in 1963 when the Bundesliga
Fußball-Bundesliga
The Fußball-Bundesliga is a professional association football league in Germany. At the top of Germany's football league system, it is the country's primary football competition. It is contested by 18 teams and operates on a system of promotion and relegation with the 2. Bundesliga...
– Germany's professional football league – was formed. After bouncing between tiers II and III, capped with two seasons spent in 2nd Bundesliga Süd from 1979–81, the club began a descent through tier III to Landesliga Bayern-Süd
Landesliga Bayern-Süd
The Landesliga Bayern-Süd is currently the 6th tier of the German football league system. Until the introduction of the 3rd Liga it was the 5th tier of the league system....
(IV), last playing in 1993–94. The sports club itself carried on until it went bankrupt in the summer of 2004 and those football players there were left to join FC Ingolstadt 04. ESV continues to operate today offering a number of other sports activities while acknowledging FC 04 on its website.

MTV Ingolstadt ( Männer-Turn-Verein von 1881 Ingolstadt) is the city's largest sportsclub with 3,400 members and has an on-and-off relationship with its football side. The club was founded in 1881 and took up football in 1905. The footballers set up a separate club in 1924, but returned to the fold in 1933 at the direction of sports authorities in the Third Reich. After World War II occupying Allied authorities ordered the dissolution of all organizations in Germany, including sporting associations. The club was re-founded as Städtischer SV Ingolstadt 1881. Their original name was restored in 1948.

MTV spent two seasons in 2. Bundesliga Süd after Amateurliga Bayern
Oberliga Bayern
The Fußball-Bayernliga, commonly referred to as the Bayernliga, is the highest football league in the state of Bavaria and the Bavarian Football League System. It is one of eleven Oberligas in German football, the fifth tier of the German football league system...
champion 1. FC Haßfurt
1. FC Haßfurt
The 1. FC Haßfurt is a German association football club from the city of Haßfurt, Bavaria.-History:The club was formed in 1917 under its current name, 1. FC Haßfurt....
declined promotion in 1978. When ESV faced bankruptcy in 2004, MTV allowed its footballers to leave to help form FC Ingolstadt.

In 2004–05, newly formed FC Ingolstadt began play in the Oberliga Bayern (IV) and managed a credible second-place finish in their first season. Their success continued in 2005–06 when they easily captured the divisional title and won promotion. They finished their debut Regionalliga Süd (III) campaign 2006–07 with a respectable fifth place result. League restructuring was planned for the 2008–09 season with the introduction of a national 3rd division and FC would have to finish their 2007–08 Regionalliga season in the top 10 to qualify. They exceeded that goal by finishing second and advancing to the 2. Fußball-Bundesliga
2. Fußball-Bundesliga
- Changes in division set-up :* Number of clubs: currently 18. From 1974 to 1981 there were two conferences, each of 20 teams. In 1981–91 it had 20...
.

Ingolstadt won its debut second division match, but the following months proved less successful for the club and by the mid-winter break they had dropped to 12th place. The latter half of the season proved even worse with the club only realizing 1 win in 18 matches. They finished the season in 17th place and were subsequently relegated to the 3. Liga.

FC delivered a steady performance in third division play and ended their campaign in third place. A new promotion/relegation format accompanied the introduction of the 3. Liga and the club's finish earned them a playoff versus FC Hansa Rostock
FC Hansa Rostock
F.C. Hansa Rostock is a German association football club based in the city of Rostock, Mecklenburg-Vorpommern. They have emerged as one of the most successful clubs from the former East Germany and have made several appearances in the 1. Bundesliga. Rostock currently compete in the 2. Bundesliga...
which had finished in 16th (third last) place in the 2. Bundesliga. Ingolstadt won both legs of the two match playoff and returned to the second division alongside the top two third tier teams which advanced automatically by virtue of their finishes.

FC Ingolstadt 04 II will play the 2011–12 season in the Regionalliga Süd
Regionalliga Süd
The Regionalliga Süd is currently the fourth tier of the German football league system. Until the introduction of the 3rd Liga in 2008, it was the third tier. It currently is the highest regional league for the southern part of Germany...
after finishing runners-up in the Bayernliga and taking FC Ismaning
FC Ismaning
FC Ismaning is a German association football club based in the district of Ismaning in Munich, Bavaria.-History:The 700 member club was founded in March 1921 and played in lower tier competition until the mid-90s when the footballers advanced for the first time to the Landesliga Bayern-Süd...
's promotion spot after the later declined promotion. They are currently coached by Joe Albersinger.

Attendance at the club's matches averaged 1400 in their first Regionalliga
Regionalliga
Regionalliga is a designation in Germany for sports leagues, which are led by one or more regional federations. Regionalligen often fall below the Bundesliga and 2nd Bundesliga of a given sport...
season. This season they have been able to attract an average of over 7500 spectators to date. Until recently, Ingolstadters tended to show more interest in longtime Bundesliga powerhouse Bayern Munich and local ice hockey
Ice hockey
Ice hockey, often referred to as hockey, is a team sport played on ice, in which skaters use wooden or composite sticks to shoot a hard rubber puck into their opponent's net. The game is played between two teams of six players each. Five members of each team skate up and down the ice trying to take...
team ERC Ingolstadt
ERC Ingolstadt
The ERC Ingolstadt are a member of the Deutsche Eishockey Liga. Commonly known as the Panthers, they play their games in Ingolstadt, Germany at the Saturn Arena. During the 2004–05 NHL lockout, Ingolstadt signed NHLers Marco Sturm, Andy McDonald, Jamie Langenbrunner and Aaron Ward...
.

Recent managers of the club:

The club has qualified for the first round of the German Cup
DFB-Pokal
The DFB-Pokal or DFB Cup is a German knockout football cup competition held annually. 64 teams participate in the competition, including all clubs from the Bundesliga and the 2nd Bundesliga. It is considered the second most important national title in German football after the Bundesliga...
four times and the second round one time: