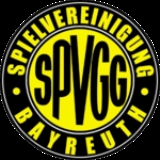 Encyclopedia
SpVgg Bayreuth is a German football club
Football in Germany
Association football is the most popular sport in Germany. The German Football Association is the sport's national governing body, with 6.6 million members organized in over 26,000 football clubs. There is a league system, with the 1. and 2. Bundesliga on top, and the winner of the first...
based in Bayreuth, Bavaria
Bavaria
Bavaria, formally the Free State of Bavaria is a state of Germany, located in the southeast of Germany. With an area of , it is the largest state by area, forming almost 20% of the total land area of Germany...
. Apart from coming within two games of earning promotion to the Fußball-Bundesliga
Fußball-Bundesliga
The Fußball-Bundesliga is a professional association football league in Germany. At the top of Germany's football league system, it is the country's primary football competition. It is contested by 18 teams and operates on a system of promotion and relegation with the 2. Bundesliga...
in 1979, the club also reached the quarter finals of the DFB-Pokal
DFB-Pokal
The DFB-Pokal or DFB Cup is a German knockout football cup competition held annually. 64 teams participate in the competition, including all clubs from the Bundesliga and the 2nd Bundesliga. It is considered the second most important national title in German football after the Bundesliga...
twice, in 1977 and 1980.

Founded in 1921 when the side left gymnastics oriented sport club TuSpo Bayreuth, SpVgg Bayreuth was one of many clubs banned and replaced with a state-sanctioned organization in 1933 during the Nazi campaign against existing sports and other social organizations. A handful of club members reformed a rump side called FSV Bayreuth to carry on the activities of the original association. This team was made up largely of soldiers stationed locally, which resulted in a constantly changing lineup as they were transferred in and out of the area. The old club was quickly resurrected after World War II
World War II
World War II, or the Second World War , was a global conflict lasting from 1939 to 1945, involving most of the world's nations—including all of the great powers—eventually forming two opposing military alliances: the Allies and the Axis...
.

The club initially stood in the shadow of two local rivals, FC Bayreuth and VfB Bayreuth, with the later taking out the Amateurliga Nordbayern (III) title in 1956. SpVgg had earned promotion to this league in 1954, having won the 2nd Amateurliga Oberfranken-West title that year and then dominated its promotion round.

The club achieved good results in the Bayernliga and managed to win its division in 1959. The team then went on to beat southern champions Schwaben Augsburg in the finals for the Bavarian title. As the Bavarian champions, the club was entitled to enter the promotion round to the 2nd Oberliga Süd
2nd Oberliga Süd
The 2nd Oberliga Süd was the second-highest level of the German football league system in the south of Germany from 1950 until the formation of the Bundesliga in 1963. It covered the three states of Bavaria, Baden-Württemberg and Hessen.-Overview:...
, where it had to overcome VfR Pforzheim
VfR Pforzheim
The VfR Pforzheim was a German association football club from the city of Pforzheim, Baden-Württemberg. The club archived notability by playing in Germany's second division in the 1965–66 season. In 2010 the club merged with 1. FC Pforzheim to form 1...
2–1 after extra time in a narrow decider for promotion to the second division.

The club spent three seasons in the second tier of Southern German football, achieving a remarkable fifth place in its first year. The second season was a struggle against relegation and, in the third and last one, it was sent down back to the Bayernliga again.

A fourth place in the last season before the league reform in 1963 saw the club qualify for the new single-division Amateurliga Bayern from 1963.

After the formation of the Bundesliga in 1963, Bayreuth played as a third division team until 1969. Another Amateurliga championship meant promotion to the second tier once more, now the Regionalliga Süd
Regionalliga Süd (1963-74)
The Regionalliga Süd was the second-highest level of the German football league system. It existed in the south of Germany from 1963 until the formation of the 2nd Bundesliga in 1974. It covered the three states of Bavaria, Baden-Württemberg and Hessen....
. It proved a short stay and SpVgg was narrowly relegated, losing a decider to ESV Ingolstadt
ESV Ingolstadt
The ESV Ingolstadt is a general sports club in Ingolstadt, Bavaria, formed on 15 February 1919.Until 2004, the club operated a football department but after a merger with local rival MTV Ingolstadt to form FC Ingolstadt 04 the footballers left for the new club.The club has over 1,600 members in 21...
5–2 after finishing on equal points.

Back in the Bayernliga, the club won an undisputed championship, losing only two out of their 34 games, 15 points clear of the second-placed Wacker München
Wacker München
FC Wacker München is a German association football club of about 200 members based in the Sendling borough of Munich, Bavaria. At their zenith in the 1920s the Blue Stars twice reached the semi-finals of the German Championship. After World War II, the club spent a year in the first division play,...
. After another difficult first year in the second division, the club established itself in the league, coming fourth in 1973 and fifth in 1974, results that proved enough to qualify for the new 2nd Bundesliga Süd
2nd Bundesliga Süd (1974-81)
The 2. Fußball-Bundesliga Süd was the second-highest level of the German football league system in the south of Germany from 1974 until the formation of the single-division 2. Fußball-Bundesliga in 1981...
.

The club did quite well in the new league and they came close to moving up to the Bundesliga in 1979 after a second-place finish in 2nd Bundesliga Süd (the southern division of 2.Bundesliga), but lost in the promotion round 1:1 and 1:2 to Bayer Uerdingen. It managed to qualify for the new single-division 2nd Bundesliga in 1981, too, but the first season in this league was very disappointing and the team was relegated to the Oberliga in 1982, having come last.

The team became a top-side in the Oberliga but took until 1985 to take out the league title again and returmn to the second division.

Although relegated to Amateur Oberliga Bayern (III) in 1988 and 1989, the team was spared further demotion when clubs that had finished ahead of them were denied licences due to their financial problems. Bayreuth could not evade relegation after a third consecutive poor finish in 1990, and in 1994 slipped further still to the Bayernliga (IV). A strong campaign returned the side to the Regionalliga Süd (III) for 2005–06. The club was denied a license for the Regionalliga in the 2006/07 season and forcibly relegated to the 4th division Bayernliga. The club won the Bayernliga title for a seventh time, building up a convincing margin to the second placed team, and fulfilling the on-the-field qualification to the Regionalliga. On 11 June 2008, the club was refused a licence for this league and has to remain in the Bayernliga. The clubs financial trouble however continued, having to declare insolvency on 22 October 2008, despite sitting second in the league.

In the 2010-11 Bayernliga season, the club unsuccessfully struggled against relegation, dropping down to the Landesliga after a 1-2 extra-time loss to Bayern Hof
Bayern Hof
SpVgg Bayern Hof is a German association football club based in Hof, Bavaria. The club was founded on 1 June 1910 as Ballspielclub Hof, but within a year was re-named Britannia Hof. In 1913, they merged with FC Roland Hof and FC Phoenix Hof to become FC Bayern Hof.-History:FC Bayern Hof was a...
in a relegation decider.

Recent managers of the club:

The club has qualified for the first round of the German Cup one quite a number of occasions:
Source: