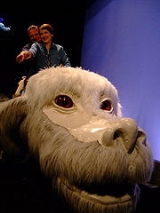 Encyclopedia
The Bavaria Film in Geiselgasteig, a district of Munich's
Munich
Munich The city's motto is "" . Before 2006, it was "Weltstadt mit Herz" . Its native name, , is derived from the Old High German Munichen, meaning "by the monks' place". The city's name derives from the monks of the Benedictine order who founded the city; hence the monk depicted on the city's coat...
suburb Grünwald, Bavaria
Grünwald, Bavaria
Grünwald is a municipality in the district of Munich, in Bavaria, Germany. It is located on the right bank of the Isar, 12 km southwest of Munich...
belongs to one of Europe's biggest and most famous film production companies.

The studios were founded already in 1919 by the film producer Peter Ostermayr, who established the Münchner Lichtspielkunst AG (Emelka) in competition to the UFA
Universum Film AG
Universum Film AG, better known as UFA or Ufa, is a film company that was the principal film studio in Germany, home of the German film industry during the Weimar Republic and through World War II, and a major force in world cinema from 1917 to 1945...
and acquired a large estate (ca. 356.000 m²) in Geiselgasteig for the studios. In 1932 the major shareholder Wilhelm Kraus founded the Bavaria Film. In 1938 the Bavaria Film was nationalised but privatised again in 1956. 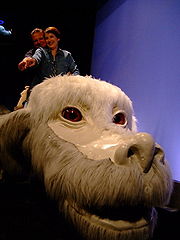 The Studios in Geiselgasteig are the reason why Munich has become a famous site of crime in TV fiction (in opposite to real life), with detectives like Derrick
Derrick (TV series)
Derrick is a German TV series produced by Telenova Film und Fernsehproduktion in association with ZDF, ORF and SRG between 1974 and 1998 about Detective Chief Inspector Stephan Derrick and his loyal assistant Inspector Harry Klein , who solve murder cases in Munich and surroundings Derrick is a...
, The Old Fox
The Old Fox
The Old Fox is a German television series created in 1976, but first on the air in 1977, now running for over three decades....
, and Der Kommissar investigating. Also Monty Python
Monty Python
Monty Python was a British surreal comedy group who created their influential Monty Python's Flying Circus, a British television comedy sketch show that first aired on the BBC on 5 October 1969. Forty-five episodes were made over four series...
worked in Geiselgasteig in 1971 and 1972 for Monty Python's Fliegender Zirkus
Monty Python's Fliegender Zirkus
Monty Python's Fliegender Zirkus consisted of two 45-minute Monty Python German television comedy specials produced by WDR for West German television...
, the specials for German and Austrian television.

The Bavaria Film Tour is an attraction offered for tourists. Visitors taking the tour see sets and props from The Neverending Story, Das Boot, Marienhof, and many more.