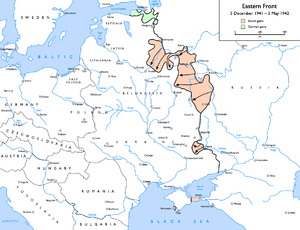 Rzhev Battles is a general term for a series of World War II
World War II
World War II, or the Second World War , was a global conflict lasting from 1939 to 1945, involving most of the world's nations—including all of the great powers—eventually forming two opposing military alliances: the Allies and the Axis...
offensives launched during January 8, 1942—March 31, 1943 by the Soviet Red Army
Red Army
The Workers' and Peasants' Red Army started out as the Soviet Union's revolutionary communist combat groups during the Russian Civil War of 1918-1922. It grew into the national army of the Soviet Union. By the 1930s the Red Army was among the largest armies in history.The "Red Army" name refers to...
in the general directions of Rzhev
Rzhev
Rzhev is a town in Tver Oblast, Russia, southwest of Staritsa and from Tver, on the highway and railway connecting Moscow and Riga. It is the uppermost town situated on the Volga River. Population:...
, Sychevka and Vyazma
Vyazma
Vyazma is a town and the administrative center of Vyazemsky District of Smolensk Oblast, Russia, located on the Vyazma River, about halfway between Smolensk and Mozhaysk. Throughout its turbulent history, the city defended western approaches to the city of Moscow...
against a German
Nazi Germany
Nazi Germany , also known as the Third Reich , but officially called German Reich from 1933 to 1943 and Greater German Reich from 26 June 1943 onward, is the name commonly used to refer to the state of Germany from 1933 to 1945, when it was a totalitarian dictatorship ruled by...
salient in the vicinity of Moscow
Moscow
Moscow is the capital, the most populous city, and the most populous federal subject of Russia. The city is a major political, economic, cultural, scientific, religious, financial, educational, and transportation centre of Russia and the continent...
, known as the "Rzhev meat grinder" ("Ржевская мясорубка") for these battles' huge losses.

The major operations that were executed as part of the strategic offensive were:

During the Soviet winter counter-offensive of 1941, and the Rzhev-Vyazma Strategic Offensive Operation (8 January 1942 - 20 April 1942), German forces were pushed back from Moscow
Moscow
Moscow is the capital, the most populous city, and the most populous federal subject of Russia. The city is a major political, economic, cultural, scientific, religious, financial, educational, and transportation centre of Russia and the continent...
. As a result, a salient
Salients, re-entrants and pockets
A salient is a battlefield feature that projects into enemy territory. The salient is surrounded by the enemy on three sides, making the troops occupying the salient vulnerable. The enemy's line facing a salient is referred to as a re-entrant...
was formed along the front line in the direction of the capital, which became known as the Rzhev-Vyazma Salient. It was strategically important for the German Army Group Centre
Army Group Centre
Army Group Centre was the name of two distinct German strategic army groups that fought on the Eastern Front in World War II. The first Army Group Centre was created on 22 June 1941, as one of three German Army formations assigned to the invasion of the Soviet Union...
due to the threat it posed to Moscow, and was therefore heavily fortified and strongly defended.

Soviet forces along the Kalinin Front and Western Front broke through the German lines west of Rzhev in January, but because of a difficult supply route the troops of the Soviet 22nd Army
22nd Army (Soviet Union)
The 22nd Army was a field army of the Russian Ground Forces, part of the Moscow Military District. It was active from 1941 to 2010. The order for the formation's dissolution was signed by the Minister of Defence on 1 July 2009....
, 29th Army
29th Army (Soviet Union)
The Soviet Red Army's 29th Army was a field army of the Red Army and later the Russian Ground Forces.- History :It was first formed in July 1941 in the Moscow Military District on the basis of 30th Rifle Corps. The 245th, 252nd, 254th and 256th Rifle Divisions, and a number of smaller units made up...
and 39th Armies became encircled. To eliminate this threat to the rear of the German 9th Army, the Germans had started Operation Seydlitz by the 2nd of July.

This operation resulted in the complete elimination of the trapped Soviet forces on 12 July, the attempted rescue of 2nd Shock Army (13 May 1942 - 10 July 1942) and the Rzhev-Sychevka Offensive Operation (30 July 1942 - 23 August 1942). The front line around the salient was pushed closer to the city of Rzhev by Wehrmacht forces. During this period, the city of Zubtsov
Zubtsov
Zubtsov is a town and the administrative center of Zubtsovsky District of Tver Oblast, Russia, located at the confluence of the Volga and Vazuza Rivers, south of Tver, southeast of Rzhev, and southwest of Staritsa. Population: 8,100 ....
was liberated by the Red Army.

This operation was nearly as heavy in losses for the Red Army as the first offensive, and also failed to reach desired objectives, but the Red Army tied down German forces which may have otherwise been used to try and relieve the Stalingrad garrison, which was fighting for its life in Stalingrad
Battle of Stalingrad
The Battle of Stalingrad was a major battle of World War II in which Nazi Germany and its allies fought the Soviet Union for control of the city of Stalingrad in southwestern Russia. The battle took place between 23 August 1942 and 2 February 1943...
.

The information about offensive was provided to OKH by an NKVD
NKVD
The People's Commissariat for Internal Affairs was the public and secret police organization of the Soviet Union that directly executed the rule of power of the Soviets, including political repression, during the era of Joseph Stalin....
double agent known as Heine as part of the plan to distract German forces from Stalingrad.

However, due to the general course of the war, Hitler ordered German forces to withdraw from the salient in March, 1943 during Operation Büffel
Operation Büffel
During World War II the name Büffel Bewegung was given to a series of local retreats conducted by the German Army on the Russian Front during the period 1–22 March 1943. This movement eliminated the Rzhev Salient and shortened the front by 230 kilometers, releasing twenty-one divisions for use...
. The Stavka used this as an opportunity to pursue the retreating Wehrmacht troops.

In the words of author David Glantz: "In the unlikely event that Zhukov was correct and Mars was really a diversion, there has never been one so ambitious, so large, so clumsily executed, or so costly".

In 2009 a television movie was aired in Russia entitled "Rzhev: Marshal Zhukov’s Unknown Battle"; it made no attempt to cover up the huge losses suffered by Soviet forces, as a consequence there were public calls in Russia for the arrest of some of those involved in its production.