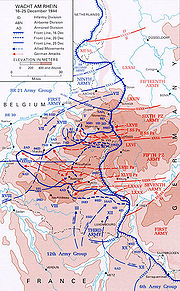 A salient is a battlefield feature that projects into enemy territory. The salient is surrounded by the enemy on three sides, making the troops occupying the salient vulnerable. The enemy's line facing a salient is referred to as a re-entrant (an angle pointing inwards). A deep salient is vulnerable to being "pinched out" across the base, forming a pocket in which the defenders of the salient become isolated.

In their topographic
Topography
Topography is the study of Earth's surface shape and features or those ofplanets, moons, and asteroids...
senses, both salient (also known as "spur") and re-entrant (also known as a "gully") are familiar concepts in orienteering
Orienteering
Orienteering is a family of sports that requires navigational skills using a map and compass to navigate from point to point in diverse and usually unfamiliar terrain, and normally moving at speed. Participants are given a topographical map, usually a specially prepared orienteering map, which they...
. A re-entrant is a very small valley or draw that occurs at the head of a stream, or that begins partially up the side of a hill or ridge-line.

Salients can be formed in a number of ways. An attacker can produce a salient in the defender's line by either intentionally making a pincer movement
Pincer movement
The pincer movement or double envelopment is a military maneuver. The flanks of the opponent are attacked simultaneously in a pinching motion after the opponent has advanced towards the center of an army which is responding by moving its outside forces to the enemy's flanks, in order to surround it...
around the flanks of a strongpoint, which becomes the tip of the salient, or by making a broad, frontal attack which is held up in the centre but advances on the flanks. An attacker would usually produce a salient in his own line by making a broad, frontal attack that is successful only in the centre, which becomes the tip of the salient.

In trench warfare
Trench warfare
Trench warfare is a form of occupied fighting lines, consisting largely of trenches, in which troops are largely immune to the enemy's small arms fire and are substantially sheltered from artillery...
, salients are distinctly defined by the opposing lines of trenches, and they were commonly formed by the failure of a broad frontal attack. The static nature of the trenches meant that forming a pocket was difficult, but the vulnerable nature of salients meant that they were often the focus of attrition battles.

In mobile warfare, such as the German Blitzkrieg
Blitzkrieg
For other uses of the word, see: Blitzkrieg Blitzkrieg is an anglicized word describing all-motorised force concentration of tanks, infantry, artillery, combat engineers and air power, concentrating overwhelming force at high speed to break through enemy lines, and, once the lines are broken,...
, salients were more likely to be made into pockets which became the focus of annihilation battles
Battle of annihilation
A battle of annihilation is a military strategy where an attacking army seeks to destroy the military capacity of the opposing army in a single planned pivotal battle...
.

A pocket carries connotations that the encircled forces have not allowed themselves to be encircled intentionally, as they may, when defending a fortified position which is usually called a siege. This is a similar distinction to that made between a skirmish and pitched battle
Pitched battle
A pitched battle is a battle where both sides choose to fight at a chosen location and time and where either side has the option to disengage either before the battle starts, or shortly after the first armed exchanges....
.

The significances of these terms are reflected by the conception of what can be expected in combat in encirclement operations. A kotel (cauldron) is expected to be "boiling" with combat activity, the large enemy forces still quite able to offer "hot" resistance in the initial stages of encirclement, and so are to be contained, but not engaged directly. A meshok in Soviet experience was often created as a result of operational breakthroughs
Breakthrough (military)
A breakthrough occurs when an offensive force has broken the enemy defensive line, and is rapidly exploiting the gap.Usually, large force is employed on a relatively small portion of the front to achieve this...
, and was sometimes as unexpected for the Soviet command as for the enemy. This encirclement, sometimes of an entity of unknown size, tended to move for some time after the initial encirclement due to inherently dynamic nature of operational warfare
Operational warfare
Operational mobility, beginning as a military theory concept during the period of mechanisation of armed forces, became a method of managing movement of forces by strategic commanders from the staging area to their Tactical Area of Responsibility....
. By contrast a gnyezdo was a reference to a tactical
Military tactics
Military tactics, the science and art of organizing an army or an air force, are the techniques for using weapons or military units in combination for engaging and defeating an enemy in battle. Changes in philosophy and technology over time have been reflected in changes to military tactics. In...
, well defined and contained encirclement of enemy troops that was seen as a fragile construct of enemy troops unsupported by its parent formation (the use of the word nest, is similar to the more familiar English expression machine gun
Machine gun
A machine gun is a fully automatic mounted or portable firearm, usually designed to fire rounds in quick succession from an ammunition belt or large-capacity magazine, typically at a rate of several hundred rounds per minute....
nest).

In German
German language
German is a West Germanic language, related to and classified alongside English and Dutch. With an estimated 90 – 98 million native speakers, German is one of the world's major languages and is the most widely-spoken first language in the European Union....
the word Kessel (literally a cauldron
Cauldron
A cauldron or caldron is a large metal pot for cooking and/or boiling over an open fire, with a large mouth and frequently with an arc-shaped hanger.- Etymology :...
) is commonly used to refer to an encircled military force, and a Kesselschlacht (cauldron battle) refers to a pincer movement
Pincer movement
The pincer movement or double envelopment is a military maneuver. The flanks of the opponent are attacked simultaneously in a pinching motion after the opponent has advanced towards the center of an army which is responding by moving its outside forces to the enemy's flanks, in order to surround it...
. The common tactic which would leave a Kessel is referred to Keil and Kessel (Keil means wedge). The term is sometimes borrowed for use in English texts about World War II. Another use of Kessel is to refer to Kessel fever, the panic and hopelessness felt by any troops who were surrounded with little or no chance of escape. Examples of Kessel battles are:

Also, during the Battle of Arnhem
Operation Market Garden
Operation Market Garden was an unsuccessful Allied military operation, fought in the Netherlands and Germany in the Second World War. It was the largest airborne operation up to that time....
, the Germans referred to the pocket of trapped British Paratroops
British 1st Airborne Division
The 1st Airborne Division was a division of the British airborne forces during the Second World War. The division was formed in 1941, after British Prime Minister Winston Churchill demanded an airborne force...
as the Hexenkessel (lit. The Witches' Cauldron).

Motti is Finnish
Finnish language
Finnish is the language spoken by the majority of the population in Finland Primarily for use by restaurant menus and by ethnic Finns outside Finland. It is one of the two official languages of Finland and an official minority language in Sweden. In Sweden, both standard Finnish and Meänkieli, a...
military slang for a totally encircled enemy unit. The tactic of encircling it is called motitus, literally meaning the formation of an isolated block or "motti", but in effect meaning an entrapment or envelopment.

The word motti is borrowed from the Swedish
Swedish language
Swedish is a North Germanic language, spoken by approximately 10 million people, predominantly in Sweden and parts of Finland, especially along its coast and on the Åland islands. It is largely mutually intelligible with Norwegian and Danish...
mått, or "measure" which means one cubic meter of firewood or pulpwood
Pulpwood
Pulpwood refers to timber with the principal use of making wood pulp for paper production.-Applications:* Trees raised specifically for pulp production account for 16% of world pulp production, old growth forests 9% and second- and third- and more generation forests account for the balance...
. When collecting timber for these purposes, the logs were cut and stacked in 1 m³ cubical stacks, each one a "motti", which would be left scattered in the woods to be picked up later. A motti in military tactics therefore means the formation of "bite sized" enemy units which are easier to contain and deal with.

This tactic of envelopment was used extensively by the Finnish forces in the Winter War
Winter War
The Winter War was a military conflict between the Soviet Union and Finland. It began with a Soviet offensive on 30 November 1939 – three months after the start of World War II and the Soviet invasion of Poland – and ended on 13 March 1940 with the Moscow Peace Treaty...
and the Continuation War
Continuation War
The Continuation War was the second of two wars fought between Finland and the Soviet Union during World War II.At the time of the war, the Finnish side used the name to make clear its perceived relationship to the preceding Winter War...
to good effect. It was especially effective against some of the mechanized units of the Soviet Army, which were effectively restricted to the long and narrow forest roads with virtually no way other than forwards or backwards. Once committed to a road, the Soviet troops effectively were trapped. Unlike the mechanized units of the Soviets, the Finnish troops could move quickly through the forests on skis and break columns of armoured Soviet units into smaller chunks (e.g., by felling trees along the road). Once the large column was split up into smaller armoured units, the Finnish forces attacking from within the forest could strike the weakened column. The smaller pockets of enemy troops could then be dealt with individually by concentrating forces on all sides against the entrapped unit.

A motitus is therefore a double envelopment manoeuvre, using the ability of light troops to travel over rough ground to encircle enemy troops on a road. Heavily outnumbered but mobile forces could easily immobilize an enemy many times more numerous.

By cutting the enemy columns or units into smaller groups and then encircle them with light and mobile forces, such as ski-troops during winter a smaller force can overwhelm a much larger force. If the encircled enemy unit was too strong, or if attacking it would have entailed an unacceptably high cost, e.g., because of a lack of heavy equipment, the motti was usually left to "stew" until it ran out of food, fuel, supplies, and ammunition and was weakened enough to be eliminated. Some of the larger mottis held out until the end of the war because they were resupplied by air. Being trapped, these units were therefore not available for battle operations.

The largest motti battles in the Winter War
Winter War
The Winter War was a military conflict between the Soviet Union and Finland. It began with a Soviet offensive on 30 November 1939 – three months after the start of World War II and the Soviet invasion of Poland – and ended on 13 March 1940 with the Moscow Peace Treaty...
occurred at the Battle of Suomussalmi
Battle of Suomussalmi
The Battle of Suomussalmi [suo.mus.sal.mi] was fought between Finnish and Soviet forces in the Winter War. The action took place from around December 7, 1939 to January 8, 1940.The outcome was a major Finnish victory against vastly superior forces...
. Three Finnish regiments enveloped and destroyed two Soviet divisions as well as a tank brigade trapped on a road.