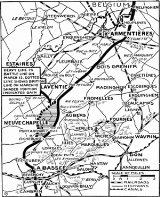 Encyclopedia
The Battles of Neuve Chapelle and Artois was a battle in the First World War
World War I
World War I , which was predominantly called the World War or the Great War from its occurrence until 1939, and the First World War or World War I thereafter, was a major war centred in Europe that began on 28 July 1914 and lasted until 11 November 1918...
. It was a British offensive in the Artois
Artois
Artois is a former province of northern France. Its territory has an area of around 4000 km² and a population of about one million. Its principal cities are Arras , Saint-Omer, Lens and Béthune.-Location:...
region and broke through at Neuve-Chapelle
Neuve-Chapelle
Neuve-Chapelle is a commune in the Pas-de-Calais department in the Nord-Pas-de-Calais region of France.-Geography:Neuve-Chapelle is situated some northeast of Béthune and southwest of Lille, near the junction of the D947 and D171 roads.-History:...
but they were unable to exploit the advantage.

The battle began on 10 March 1915. By this time, a huge influx of troops from Britain had to some extent relieved the French situation in Flanders and enabled a continuous British line stretching from Langemarck to Givenchy
Givenchy
Givenchy is a French brand of clothing, accessories, perfumes and cosmetics with Parfums Givenchy.The house of Givenchy was founded in 1952 by designer Hubert de Givenchy and is a member of Chambre Syndicale de la Haute Couture et du Pret-a-Porter...
. The ultimate aim of the battle was to cause a rupture in the German lines which would then be exploited with a rush on the Aubers Ridge and possibly even Lille
Lille
Lille is a city in northern France . It is the principal city of the Lille Métropole, the fourth-largest metropolitan area in the country behind those of Paris, Lyon and Marseille. Lille is situated on the Deûle River, near France's border with Belgium...
, a major enemy communications centre. A simultaneous French assault on the Vimy Ridge was also planned although the situation in Champagne
Champagne (province)
The Champagne wine region is a historic province within the Champagne administrative province in the northeast of France. The area is best known for the production of the sparkling white wine that bears the region's name...
soon led to this particular part of the operation to be postponed. This was to be the first time that aerial photography
Aerial photography
Aerial photography is the taking of photographs of the ground from an elevated position. The term usually refers to images in which the camera is not supported by a ground-based structure. Cameras may be hand held or mounted, and photographs may be taken by a photographer, triggered remotely or...
was to play a prominent part in a major battle with the entire German lines being mapped from the air.

Despite poor weather conditions, the early stages of the battle went extremely well for the British. The Royal Flying Corps
Royal Flying Corps
The Royal Flying Corps was the over-land air arm of the British military during most of the First World War. During the early part of the war, the RFC's responsibilities were centred on support of the British Army, via artillery co-operation and photographic reconnaissance...
(RFC) quickly secured aerial dominance and set about bombarding German reserves and transportation (railways) en route to defend the area. In the center of the attack, two companies of the German Jaeger Battalion 11 (with roughly 200 men and a single machinegun surviving the initial shelling) delayed the advance for more than six hours until forced to retreat. Shortly after, Neuve Chapelle itself had been secured. It was at this point that the advance ground to a halt. Though the aerial photography had been useful to extract, it was unable to efficiently identify the enemy's strong defensive points. Primitive communication also meant that British commanders had been unable to keep in touch with each other and the battle thus became uncoordinated and this in turn disrupted the supply lines. On 12 March, German forces commanded by Crown Prince Rupprecht launched a counter-attack which, although unsuccessful, did at least manage to end any chance of further advancement; the campaign was officially abandoned on 13 March. 40,000 Allied troops took part during the battle and suffered 11,200 (7,000 British, 4,200 Indian) casualties. The Germans lost around the same number. In total, the British succeeded in recapturing just over 2 km (1.2 mi) of lost ground.

After the failure of the Battle of Neuve Chapelle, the British Commander-in-Chief Field Marshal
Field Marshal
Field Marshal is a military rank. Traditionally, it is the highest military rank in an army.-Etymology:The origin of the rank of field marshal dates to the early Middle Ages, originally meaning the keeper of the king's horses , from the time of the early Frankish kings.-Usage and hierarchical...
Sir John French claimed that it failed due to a lack of shells. This led to the Shell Crisis of 1915
Shell Crisis of 1915
The Shell Crisis of 1915 was a shortage of artillery shells on the front lines of World War I, which largely contributed to weakening public appreciation of government of the United Kingdom because it was widely perceived that the production of artillery shells for use by the British Army was...
which, along with the failed attack on the Dardanelles, brought down the Liberal
Liberal Party (UK)
The Liberal Party was one of the two major political parties of the United Kingdom during the 19th and early 20th centuries. It was a third party of negligible importance throughout the latter half of the 20th Century, before merging with the Social Democratic Party in 1988 to form the present day...
British government under the Premiership
Prime minister
A prime minister is the most senior minister of cabinet in the executive branch of government in a parliamentary system. In many systems, the prime minister selects and may dismiss other members of the cabinet, and allocates posts to members within the government. In most systems, the prime...
of H. H. Asquith
H. H. Asquith
Herbert Henry Asquith, 1st Earl of Oxford and Asquith, KG, PC, KC served as the Liberal Prime Minister of the United Kingdom from 1908 to 1916...
. He formed a new coalition government and appointed Lloyd George
David Lloyd George
David Lloyd George, 1st Earl Lloyd-George of Dwyfor OM, PC was a British Liberal politician and statesman...
as Minister of Munitions
Minister of Munitions
The Minister of Munitions was a British government position created during the First World War to oversee and co-ordinate the production and distribution of munitions for the war effort...
. It was a recognition that the whole economy would have to be geared for war if the Allies were to prevail on the Western Front.

The Indian Corps provided half the attacking force at the Battle of Neuve Chapelle which started on 10 March 1915. It was one of the major engagements for the Indian Army
British Indian Army
The British Indian Army, officially simply the Indian Army, was the principal army of the British Raj in India before the partition of India in 1947...
on the Western Front. Elements of the Indian Corps participated attempted to break the German lines at Neuve Chapelle and went on to capture Aubers
Aubers
Aubers is a commune in the Nord department in northern France. It is west of Lille.-Heraldry:-References:*...
. However, a logistical failure in moving British guns within range to cover the advance saw the Indian troops go in without covering fire. Almost 1,000 were killed. Other equally futile attacks were ordered that day by the British 1st Army commander, General Sir Douglas Haig, with similar tragic results. On 25 April, the Indian Corps had its first full exposure to toxic gas warfare.

Rifleman Gobar Singh Negi of the 2nd / 39th Garhwal Rifles
39th Garhwal Rifles
The 39th Garhwal Rifles were an infantry regiment of the British Indian Army. They could trace their origins to 1887, when they were raised as the Aligarh Levy, but was disbanded after disgracing itself at the Rawalpindi Review in 1888....
was awarded the Victoria Cross
Victoria Cross
The Victoria Cross is the highest military decoration awarded for valour "in the face of the enemy" to members of the armed forces of various Commonwealth countries, and previous British Empire territories....
, the United Kingdom’s highest award for valour. From his citation: For most conspicuous bravery on 10 March, 1915, at Neuve-Chapelle. During our attack on the German position he was one of a bayonet party with bombs who entered their main trench, and was the first man to go round each traverse, driving back the enemy until they were eventually forced to surrender. He was killed during this engagement. Gobar Singh Negi was one of 4,700 soldiers of the Indian Army who are commemorated at the Neuve-Chapelle Indian Memorial maintained by the Commonwealth War Graves Commission
Commonwealth War Graves Commission
The Commonwealth War Graves Commission is an intergovernmental organisation of six independent member states whose principal function is to mark, record and maintain the graves, and places of commemoration, of Commonwealth of Nations military service members who died in the two World Wars...
.

In the novel The Magus
The Magus (novel)
The Magus is the first novel written by British author John Fowles. It tells the story of Nicholas Urfe, a teacher on a small Greek island...
by John Fowles
John Fowles
John Robert Fowles was an English novelist and essayist. In 2008, The Times newspaper named Fowles among their list of "The 50 greatest British writers since 1945".-Birth and family:...
, the title character relates his own (possibly fictitious) account of the battle to illustrate the pointless brutality of war, calling Neuve Chapelle "a place without the possibility of reason".