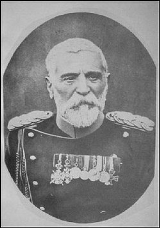 Encyclopedia
Radomir Putnik, also known as Vojvoda Putnik, OSS
Order of St. Sava
The Order of St. Sava was a decoration instituted by the order King Milan I of Serbia in 1883. The Order of Saint Sava originally was established to recognize civilians for meritorious achievements in the arts and sciences. In 1914 a change was made permitting military personnel to receive the...
OCT
Order of the Cross of Takovo
The Order of the Cross of Takovo was instituted in 1865 to mark the 50th anniversary of the Second Serbian Uprising against the Ottoman Empire, which had started in Takovo, Serbia....
OKS GCMG  was a Serbia
Serbia
Serbia , officially the Republic of Serbia , is a landlocked country located at the crossroads of Central and Southeast Europe, covering the southern part of the Carpathian basin and the central part of the Balkans...
n Field Marshal
Field Marshal
Field Marshal is a military rank. Traditionally, it is the highest military rank in an army.-Etymology:The origin of the rank of field marshal dates to the early Middle Ages, originally meaning the keeper of the king's horses , from the time of the early Frankish kings.-Usage and hierarchical...
(vojvoda) and Chief of General Staff
Chief of the General Staff (Serbia)
The Chief of the General Staff is the Chief of the General Staff of the Military of Serbia. He is appointed by the President of Serbia, who is the commander-in-chief. The position dates to the period of the Principality of Serbia The current Chief of the General Staff is Lt...
in the Balkan Wars
Balkan Wars
The Balkan Wars were two conflicts that took place in the Balkans in south-eastern Europe in 1912 and 1913.By the early 20th century, Montenegro, Bulgaria, Greece and Serbia, the countries of the Balkan League, had achieved their independence from the Ottoman Empire, but large parts of their ethnic...
and World War I
World War I
World War I , which was predominantly called the World War or the Great War from its occurrence until 1939, and the First World War or World War I thereafter, was a major war centred in Europe that began on 28 July 1914 and lasted until 11 November 1918...
, and took part in all wars that Serbia waged from 1876 to 1917.

In the mid-19th century, Putnik's family returned from exile in Austria-Hungary
Austria-Hungary
Austria-Hungary , more formally known as the Kingdoms and Lands Represented in the Imperial Council and the Lands of the Holy Hungarian Crown of Saint Stephen, was a constitutional monarchic union between the crowns of the Austrian Empire and the Kingdom of Hungary in...
to liberated Serbia. Putnik's father, Dimitrije, was a teacher in Kragujevac, and Radomir completed his basic schooling there. He attended the Artillery School (the precursor to the later Military Academy) in Belgrade
Belgrade
Belgrade is the capital and largest city of Serbia. It is located at the confluence of the Sava and Danube rivers, where the Pannonian Plain meets the Balkans. According to official results of Census 2011, the city has a population of 1,639,121. It is one of the 15 largest cities in Europe...
, where he graduated in 1863, placing eighth in his class. In 1879, he married Ljubica Bojović, daughter of a colonel, with whom he had seven children (three daughters and four sons). Contemporaries describe him as an ascetic, introverted man, and a heavy smoker; however, he was also thought tough on professional issues. He proved himself in the battlefield during the wars against the Turks in 1876 and 1877. On several occasions, he was severely reprimanded and even briefly put in custody for using "inappropriate language" to senior officers.

He became a professor in the Military Academy, holding that position from 1886 to 1895. In 1889 he was appointed Deputy Chief of General Staff. However, he soon came into conflict with King Milan I, partly for not allowing a King's protégé to pass an examination. Political intrigue and latent conflict with Kings Milan and his successor, King Alexander I, would follow him throughout this part of his career. In 1895, he was forced to retire and, after an unsuccessful assassination attempt at King Milan in 1899, he left the country for fear of further retaliation.

After the military coup d'etat
Coup d'état
A coup d'état state, literally: strike/blow of state)—also known as a coup, putsch, and overthrow—is the sudden, extrajudicial deposition of a government, usually by a small group of the existing state establishment—typically the military—to replace the deposed government with another body; either...
(executed by what would later become unofficially called Black Hand
Black Hand
Unification or Death , unofficially known as the Black Hand , was a secret military society formed by members of the Serbian army in the Kingdom of Serbia, which was founded on September 6, 1901. It was intent on uniting all of the territories containing significant Serb populations annexed by...
organisation) against Alexander I in 1903, Putnik was rehabilitated, promoted to the rank of General and appointed Chief of General Staff
Chief of the General Staff (Serbia)
The Chief of the General Staff is the Chief of the General Staff of the Military of Serbia. He is appointed by the President of Serbia, who is the commander-in-chief. The position dates to the period of the Principality of Serbia The current Chief of the General Staff is Lt...
. He proceeded to completely reorganise the army, to retire old and promote new officers, and to update war plans. He appointed General Živojin Mišić
Živojin Mišic
Živojin Mišić OKS GCMG was a Vojvoda and the most successful Serbian commander who participated in all Serbia's wars from 1876 to 1918.-Early years:Misic's grandfather was born in Struganik near Mionica...
as his deputy. Despite occasional personality clashes, the two men had deep respect for each other. Putnik was the first officer to be appointed to the highest rank of vojvoda (Field Marshal). In 1912, he led the Serbian Army into victories in the First
First Balkan War
The First Balkan War, which lasted from October 1912 to May 1913, pitted the Balkan League against the Ottoman Empire. The combined armies of the Balkan states overcame the numerically inferior and strategically disadvantaged Ottoman armies and achieved rapid success...
and Second Balkan War
Second Balkan War
The Second Balkan War was a conflict which broke out when Bulgaria, dissatisfied with its share of the spoils of the First Balkan War, attacked its former allies, Serbia and Greece, on 29 June 1913. Bulgaria had a prewar agreement about the division of region of Macedonia...
. During that period, he was also Serbian Minister of War on several occasions.

Caught in Budapest
Budapest
Budapest is the capital of Hungary. As the largest city of Hungary, it is the country's principal political, cultural, commercial, industrial, and transportation centre. In 2011, Budapest had 1,733,685 inhabitants, down from its 1989 peak of 2,113,645 due to suburbanization. The Budapest Commuter...
when Austria-Hungary declared war upon his country, Putnik was allowed safe passage back to Serbia in a chivalrous and possibly self-defeating gesture by the Austro-Hungarian emperor Franz Josef
Franz Josef
Franz Josef or Franz Joseph is a given name.People known solely by the name:* Franz Joseph I of Austria , Emperor of Austria, Apostolic King of Hungary and King of Bohemia...
. After a troublesome trip, Putnik returned to Serbia and offered his resignation to King Peter I of Serbia on the grounds of ill health. It was rejected, the King insisting that Putnik take command over the army, if only in strategic sense, while younger generals would take over operational duties. Putnik had to spend most of his time in a well-heated room. However, his impaired health did not prevent him from successfully organising the campaign
Serbian Campaign (World War I)
The Serbian Campaign was fought from late July 1914, when Austria-Hungary invaded Serbia at the outset of the First World War, until late 1915, when the Macedonian Front was formed...
. Serbia defeated the Austrian Army's offensives in August and September 1914, driving it out of Serbia by December.

In the atmosphere of recrimination that followed between the government and the High Command, the entire General Staff was dismissed in January 1916, including Putnik. He felt embittered, having learned of his dismissal from a cashier who gave him his salary without a Chief of General Staff's supplement. He traveled to Nice
Nice
Nice is the fifth most populous city in France, after Paris, Marseille, Lyon and Toulouse, with a population of 348,721 within its administrative limits on a land area of . The urban area of Nice extends beyond the administrative city limits with a population of more than 955,000 on an area of...
, where French authorities welcomed him with honors and gave him a villa. He was overcome by lung emphysema and died on 17 May 1917, without seeing his homeland again. His remains were transferred to Serbia in 1926 and buried with honors in a chapel at Belgrade's New Cemetery. The grave carries the epitaph
Epitaph
An epitaph is a short text honoring a deceased person, strictly speaking that is inscribed on their tombstone or plaque, but also used figuratively. Some are specified by the dead person beforehand, others chosen by those responsible for the burial...
"Grateful Homeland to Radomir Putnik". Mount Putnik
Mount Putnik
Mount Putnik is a mountain located north of Three Isle Creek and west of the Kananaskis River in Peter Lougheed Provincial Park Alberta, Canada. The mountain is named after the Serbian Field Marshal Radomir Putnik....
in Canada is named after him.

Troop concentration on paper is a quick and easy matter.

Ironic remark in a letter to Andra Knićanin on the movements of the Serbian army across very difficult terrain at the beginning of the Serbo-Turkish war of 1878.

Those were only skirmishes with Turkish rearguards

Upon first hearing of the Battle of Kumanovo
Battle of Kumanovo
The Battle of Kumanovo or Battle of Kumanova on 23 – 24 October 1912 was a major battle of the First Balkan War. It was an important Serbian victory over the Ottoman army in Vardar Macedonia, shortly after the outbreak of the war...
- The Serbian High Command expected that a decisive battle with the Ottoman forces has yet to take place - most likely on Ovče Polje plateau just north of Skopje
Skopje
Skopje is the capital and largest city of the Republic of Macedonia with about a third of the total population. It is the country's political, cultural, economic, and academic centre...
. Also, due to communication problems, it first heard of the battle when it had already been won.