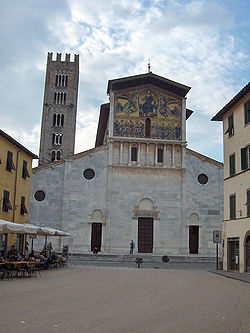 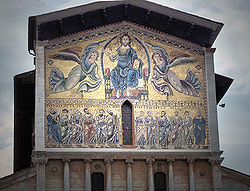 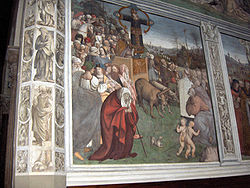 The Basilica of San Frediano is a Romanesque
Romanesque architecture
Romanesque architecture is an architectural style of Medieval Europe characterised by semi-circular arches. There is no consensus for the beginning date of the Romanesque architecture, with proposals ranging from the 6th to the 10th century. It developed in the 12th century into the Gothic style,...
church in Lucca
Lucca
Lucca is a city and comune in Tuscany, central Italy, situated on the river Serchio in a fertile plainnear the Tyrrhenian Sea. It is the capital city of the Province of Lucca...
, Italy
Italy
Italy , officially the Italian Republic languages]] under the European Charter for Regional or Minority Languages. In each of these, Italy's official name is as follows:;;;;;;;;), is a unitary parliamentary republic in South-Central Europe. To the north it borders France, Switzerland, Austria and...
, situated on the Piazza San Frediano.

Fridianus
Fridianus
Saint Fridianus is venerated as a Christian saint of the 6th century and as a bishop of Lucca. The Basilica di San Frediano in Lucca is dedicated to him....
(Frediano) was an Irish bishop of Lucca in the first half of the 6th century. He had a church built on this spot, dedicated to St. Vincent
Vincent of Saragossa
Saint Vincent of Saragossa, also known as Vincent Martyr, Vincent of Huesca or Vincent the Deacon, is the patron saint of Lisbon. His feast day is 22 January in the Roman Catholic Church and Anglican Communion and 11 November in the Eastern Orthodox Churches...
, a martyr from Zaragoza
Zaragoza
Zaragoza , also called Saragossa in English, is the capital city of the Zaragoza Province and of the autonomous community of Aragon, Spain...
, Spain. When Fridianus was buried in this church, the church was renamed Ss. Frediano and Vincenzo. Soon afterwards, a community of Augustinian canons was growing around this church. In the Longobard era, the church and the Canon House were enlarged. In 1104, this order was recognized by pope Paschal II. The prior
Prior
Prior is an ecclesiastical title, derived from the Latin adjective for 'earlier, first', with several notable uses.-Monastic superiors:A Prior is a monastic superior, usually lower in rank than an Abbot. In the Rule of St...
of St. Frediano was later accorded a rank equal in dignity to that of a bishop
Bishop
A bishop is an ordained or consecrated member of the Christian clergy who is generally entrusted with a position of authority and oversight. Within the Catholic Church, Eastern Orthodox, Oriental Orthodox Churches, in the Assyrian Church of the East, in the Independent Catholic Churches, and in the...
.

The church acquired its present appearance of a typical Roman basilica
Basilica
The Latin word basilica , was originally used to describe a Roman public building, usually located in the forum of a Roman town. Public basilicas began to appear in Hellenistic cities in the 2nd century BC.The term was also applied to buildings used for religious purposes...
during the period 1112-1147. In the 13th-14th centuries the striking façade was decorated with a huge golden 13th century mosaic
Mosaic
Mosaic is the art of creating images with an assemblage of small pieces of colored glass, stone, or other materials. It may be a technique of decorative art, an aspect of interior decoration, or of cultural and spiritual significance as in a cathedral...
representing The Ascension of Christ the Saviour with the apostles below. Berlinghiero Berlinghieri
Berlinghiero Berlinghieri
Berlinghiero Berlinghieri, also known as Berlinghiero of Lucca, was an Italian painter of the early thirteenth century. He was the father of the painters Barone Berlinghieri, Bonaventura Berlinghieri, and Marco Berlinghieri...
designed it in a Byzantine/medieval style. 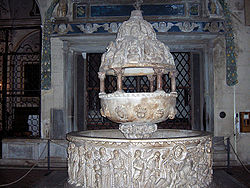 Several chapels of the nobility were added in the 14th-16th centuries. These are lavishly decorated with paintings.

Inside, the basilica is built in richly carved white marble. It consists of a nave
Nave
In Romanesque and Gothic Christian abbey, cathedral basilica and church architecture, the nave is the central approach to the high altar, the main body of the church. "Nave" was probably suggested by the keel shape of its vaulting...
and two aisles with arches supported by column
Column
A column or pillar in architecture and structural engineering is a vertical structural element that transmits, through compression, the weight of the structure above to other structural elements below. For the purpose of wind or earthquake engineering, columns may be designed to resist lateral forces...
s with Roman and Romanesque capitals
Capital (architecture)
In architecture the capital forms the topmost member of a column . It mediates between the column and the load thrusting down upon it, broadening the area of the column's supporting surface...
. The Roman capitals were recycled from the nearby Roman amphitheatre
Amphitheatre
An amphitheatre is an open-air venue used for entertainment and performances.There are two similar, but distinct, types of structure for which the word "amphitheatre" is used: Ancient Roman amphitheatres were large central performance spaces surrounded by ascending seating, and were commonly used...
.

The highlight at the entrance is the huge 12th century Romanesque baptismal font (the Fonte Lustrale). It is composed of a bowl, covered with a tempietto, resting on pillars, inside a circular basin. It is the craftmanship of master Roberto (his signature is on the basin) and two unknown masters. The basin is decorated with The Story of Moses by a Lombard sculptor. Master Roberto did the last two panels The Good Shepherd and the Six Prophets. The tempietto was sculpted by a Tuscan master, representing the months of the year and the apostles.

Behind this font, higher on the wall, are two 15th century glazed terracotta
Glazed architectural terra-cotta
Glazed architectural terra-cotta is a ceramic masonry building material popular in the United States from the late 19th century until the 1930s, and still one of the most common building materials found in U.S. urban environments...
lunette
Lunette
In architecture, a lunette is a half-moon shaped space, either filled with recessed masonry or void. A lunette is formed when a horizontal cornice transects a round-headed arch at the level of the imposts, where the arch springs. If a door is set within a round-headed arch, the space within the...
s : The Annunciation and St. Bartholomew, both attributed to the school of Andrea della Robbia
Andrea della Robbia
Andrea della Robbia was an Italian Renaissance sculptor, especially in ceramics. He was the son of Marco della Robbia. Andrea della Robbia's uncle, Luca della Robbia, popularized the use of glazed terra-cotta for sculpture...
.

There is another baptismal font, still in use, carved and adapted from a sacramental altar by Matteo Civitali
Matteo Civitali
Matteo Civitali was an Italian sculptor and architect, painter and engineer from Lucca. He was a leading artistic personality of the Early Renaissance in Lucca, where he was born and where most of his work remains. He was trained in Florence, where Antonio Rossellino and Mino da Fiesole influenced...
in 1489.

The counterfaçade houses the 16th century organ
Organ (music)
The organ , is a keyboard instrument of one or more divisions, each played with its own keyboard operated either with the hands or with the feet. The organ is a relatively old musical instrument in the Western musical tradition, dating from the time of Ctesibius of Alexandria who is credited with...
in the exquisitely carved. gold-plated choir from the 17th century.

On the right hand is the side chapel of St. Zita
Zita
Saint Zita was an Italian saint, the patron saint of maids and domestic servants. She is also appealed to in order to help find lost keys.-Life:...
(1218-1278), a popular saint in Lucca. Her intact mummified body, lying on a bed of brocade, is on display in a glass shrine. On the walls of the chapel are several canvasses from the 16th and 17th century depicting episodes from her life.

The remains of St. Frediano lie underneath the main altar from the 16th century. A massive stone monolith
Monolith
A monolith is a geological feature such as a mountain, consisting of a single massive stone or rock, or a single piece of rock placed as, or within, a monument...
stands left of the main altar. This was probably pilfered from the amphiteatre of Lucca. But local tradition has it that it was miraculously transported to Lucca by San Frediano and used as a predella
Predella
A predella is the platform or step on which an altar stands . In painting, the predella is the painting or sculpture along the frame at the bottom of an altarpiece...
(step of an altar) for the first altar.

The Trenta chapel in the left aisle houses the polyptych
Polyptych
A polyptych generally refers to a painting which is divided into sections, or panels. The terminology that follows is in relevance to the number of panels integrated into a particular piece of work: "diptych" describes a two-part work of art; "triptych" describes a three-part work; "tetraptych"...
of the Virgin and the Child, a 15th century masterpiece by Jacopo della Quercia
Jacopo della Quercia
Jacopo della Quercia was an Italian sculptor of the Italian Renaissance, a contemporary of Brunelleschi, Ghiberti and Donatello. He is considered a precursor of Michelangelo.-Biography:...
, carved with the help of his assistant Giovanni da Imola. Below the altar is a Roman sarcophagus
Sarcophagus
A sarcophagus is a funeral receptacle for a corpse, most commonly carved or cut from stone. The word "sarcophagus" comes from the Greek σαρξ sarx meaning "flesh", and φαγειν phagein meaning "to eat", hence sarkophagus means "flesh-eating"; from the phrase lithos sarkophagos...
with the body of St. Richard, an English “king” (of Wessex), who died in Lucca in 722 while on pilgrimage to Rome. He was the supposed father of Saints Willibald, Winiblad and Walpurga. On the marble floor lies a tombstone of Lorenzo Trenta and his wife, equally from the hand of Jacopo della Quercia.

Among the many chapels, the chapel of the Cross certainly stands out. It contains frescoes, recently restored, by Amico Aspertini
Amico Aspertini
Amico Aspertini is an Italian Renaissance painter whose complex, eccentric, and eclectic style anticipates Mannerism. He is considered among the first of the Bolognese School of painting.-Biography:...
(1508-1509). The blue vault shows us God surrounded by angels, prophets and sibyl
Sibyl
The word Sibyl comes from the Greek word σίβυλλα sibylla, meaning prophetess. The earliest oracular seeresses known as the sibyls of antiquity, "who admittedly are known only through legend" prophesied at certain holy sites, under the divine influence of a deity, originally— at Delphi and...
s. Above the altar is an anonymous 17th century painting representing Volto Santo, St. Augustine and St. Ubaldo. On the right wall is the fresco of St. Frediano displacing the course of the river Serchio
Serchio
At 126 kilometres the Serchio is the third longest river in the Italian region of Tuscany, coming after the Arno and the Ombrone...
, while trying to stop the flooding. Next to it is a column which is, at closer sight, actually flat. The sgraffiti
Sgraffito
Sgraffito is a technique either of wall decor, produced by applying layers of plaster tinted in contrasting colors to a moistened surface, or in ceramics, by applying to an unfired ceramic body two successive layers of contrasting slip, and then in either case scratching so as to produce an...
are drawn in the art technique of trompe l’oeil, giving a false perspective and the illusion of a column. On the left wall is the fresco of the Transportation of the Volto Santo from the port of Luni to Lucca by the Blessed Giovanni, bishop of Lucca. In the front the stooping old lady in red robe certainly steals the show. The mortal remains of this bishop are preserved in this chapel.