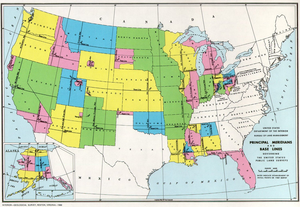 In the United States Public Land Survey System
Public Land Survey System
The Public Land Survey System is a method used in the United States to survey and identify land parcels, particularly for titles and deeds of rural, wild or undeveloped land. Its basic units of area are the township and section. It is sometimes referred to as the rectangular survey system,...
, a baseline is the principal east-west line that divides survey township
Survey township
Survey township, sometimes called Congressional township, as used by the United States Public Land Survey System, refers to a square unit of land, that is nominally six miles on a side...
s between north and south. The baseline meets its corresponding meridian
Meridian (geography)
A meridian is an imaginary line on the Earth's surface from the North Pole to the South Pole that connects all locations along it with a given longitude. The position of a point along the meridian is given by its latitude. Each meridian is perpendicular to all circles of latitude...
at the point of origin, or initial point, for the land survey. For example, the baseline for Nebraska
Nebraska
Nebraska is a state on the Great Plains of the Midwestern United States. The state's capital is Lincoln and its largest city is Omaha, on the Missouri River....
and Kansas
Kansas
Kansas is a US state located in the Midwestern United States. It is named after the Kansas River which flows through it, which in turn was named after the Kansa Native American tribe, which inhabited the area. The tribe's name is often said to mean "people of the wind" or "people of the south...
is shared as the border for both states, at the 40th parallel north
40th parallel north
The 40th parallel north is a circle of latitude that is 40 degrees north of the Earth's equatorial plane. It crosses Europe, the Mediterranean Sea, Asia, the Pacific Ocean, North America, and the Atlantic Ocean....
.

Often, a baseline is marked by other features such as a road or boundary between counties.


"Baseline Road" in the United States

Many communities in the United States have roads that run along survey baselines, many of which are named to reflect that fact. Some examples:

In Canadian land surveying, a base line is one of the many principal east-west lines that correspond to 4 tiers of townships (2 tiers north and 2 south). Each base line is about 24 miles apart, with the first base line at the 49th parallel
49th parallel north
The 49th parallel north is a circle of latitude that is 49 degrees north of the Earth's equatorial plane. It crosses Europe, Asia, the Pacific Ocean, North America, and the Atlantic Ocean....
, the Western US-Canadian border. It is therefore equivalent to the standard parallel in the US system. In Ontario, a baseline forms a straight line parallel a geographical feature (usually a lake, especially Lake Ontario
Lake Ontario
Lake Ontario is one of the five Great Lakes of North America. It is bounded on the north and southwest by the Canadian province of Ontario, and on the south by the American state of New York. Ontario, Canada's most populous province, was named for the lake. In the Wyandot language, ontarío means...
or Lake Erie
Lake Erie
Lake Erie is the fourth largest lake of the five Great Lakes in North America, and the tenth largest globally. It is the southernmost, shallowest, and smallest by volume of the Great Lakes and therefore also has the shortest average water residence time. It is bounded on the north by the...
) that serves as a reference line for surveying a grid of property lots. The result of this surveying is the concession road and sideline
Concession road
In Upper and Lower Canada, concession roads were laid out by the colonial government through undeveloped land to define lots to be developed; the name comes from a Lower Canadian French term for a row of lots. Concession roads are straight, and follow an approximately square grid, usually oriented...
system in use today.